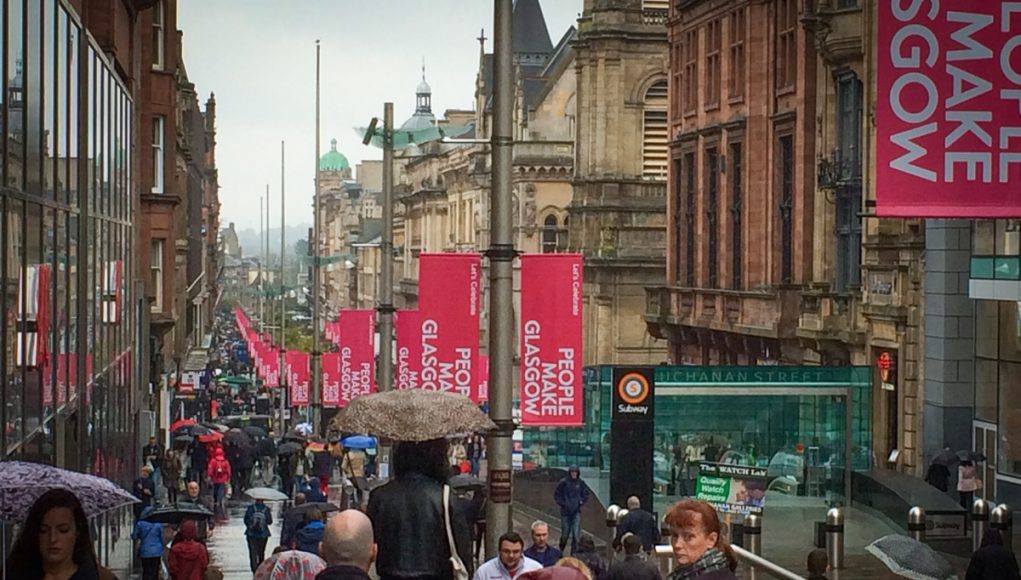 Glasgow redemption – after Thursday night’s shenanigans (read about them here), Friday was a new day — a wet day, but a new day nonetheless. (Would it really be Glasgow without rain?)

We had planned to meet my cousin Lindsey in town and Jackie had an art appointment later in the day — but I really didn’t want to drive on THOSE roads again.

While getting ready, I checked the net for information on Glasgow bus lanes and found that I’m not the only one who stumbles over them — not by a long shot! Apparently the city of Glasgow has taken in £800,000 (just over US$1M) in just two months from bus lane fines!

So, instead, we planned to take advantage of the great Glasgow rail system and take a taxi to the nearest station. When the cabbie arrived at the hotel, he compared the cost of the cab + train with the cost of just taking the cab all the way in – not much difference so it was a no brainer!

The cabbie was a Mr MacAllister (don’t remember his first name). Lots of good conversatIon on the way in including a recap of last nights events.

We walked around in town until lunchtime and stopped to talk with a very nice cop on the beat. He told us what he knew about bus lane fines and how to get to the city hall traffic office. He also told us that he doesn’t drive his car in the city if he can avoid it… Hmmm

At lunch time we met with Lindsey and she took us to a nice small cafe. Lindsey is a lawyer, so what she said next carried a lot of weight. She told us that we should enter an appeal at the same time we pay the fine as this would freeze the fine amount at half-price.

After lunch we went to city hall and met a nice young lady named Fiona (I’ve decided that all people in Britain named Fiona are very pleasant).

We told her our predicament and what we’d been advised. She showed us how to fill out the appeal form and said that yesterday’s infractions were not yet on her system so there was no way to know how many infractions there were, or even if there were any! Because of that, we couldn’t pay for them yet.

She also said that some of the cameras are turned off at night and she thought that at least one location we stumbled over had not been activated yet. I asked her if we were to submit the appeal and there were no infractions recorded, would that be like an admission of guilt? “No,” she said laughing, “we’re not THAT cruel!”

So I filled out the appeal, giving excruciating detail of what had transpired, and finished it off with “if you can see fit to take care of these tickets, I promise never to drive in Glasgow again!”

And, as you can imagine, I was very serious about that.

We took a subway (Lindsey’s advice again) to our next appointment – an art contact of Jackie’s named Zach – and learned about some exciting new art business things in the works. He also drove us back to our airport hotel, which saved on the taxi fare and capped off a nice day.

We did one more thing before the day was over: we visited my boyhood home in East Kilbride. The last time I had been there was probably around 1961 and it hadn’t changed too much. It just looked older (like me) and smaller than I’d remembered.

I had some photos with me that my Dad had taken all those years ago. I took some modern versions, trying to mimic the angles as much as possible and I plan to merge the old and new into one photo – I’ll post the results of that soon.

Jackie also took some of me standing in the exact same places as I had 55 years ago (that’s mind-bending!)  The taxi driver (Dennis) said I still looked the same, but perhaps he was fishing for a tip…  🙂

Finally, I returned the car early to the rental agency and explained the poor Passat’s injuries and the potential citations to the young Europcar agent. He said that the bus lane rules were made for British drivers who “should know better” and he thought our appeal would be upheld – so there’s some hope! And because we had full insurance on the car, there was no charge for the tire…

So in the end Glasgow vindicated herself nicely. She just kind of grew up while I was away and I was trying to treat her as I had in her younger days.

More vindication: several weeks later, we received a letter at our home in Ohio from the Glasgow traffic control. They said they could find no pictures showing us in bus lanes or on one-way streets and that there would be no charges or fines. 🙂

Perfect — all’s well that ends well. Perhaps my father was still watching out for me and making sure that Glasgow treated us well on his final trip there.