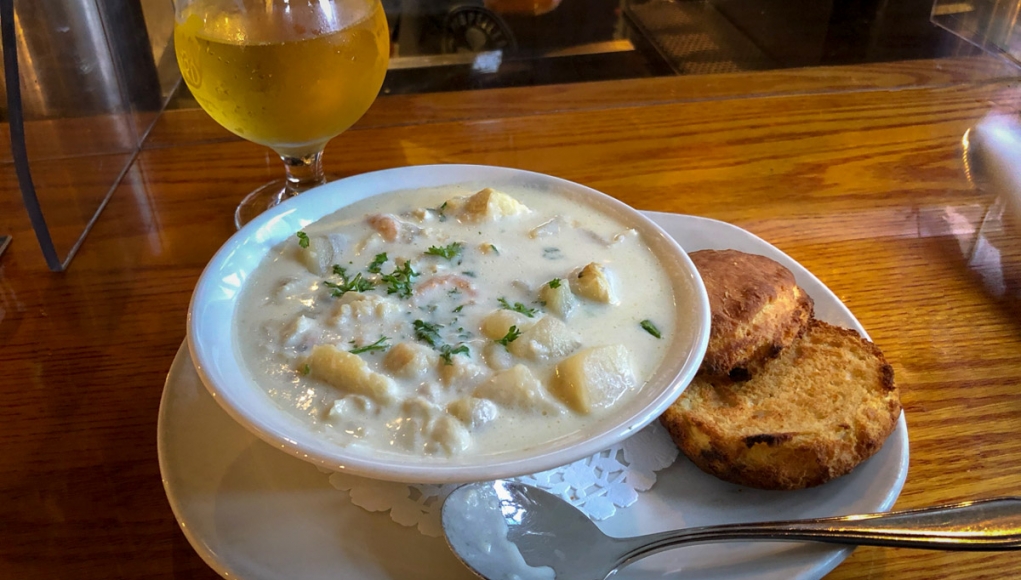 After we completed quarantine in our new home of Nova Scotia, it didn’t take long for us to get out and start enjoying local delicacies — heck, the first restaurant recommendation we got was from the RCMP officer who checked on our quarantine compliance!

But there was more. We found a burgeoning cider industry, craft breweries, and mountains of fresh fish from local fishermen. You know the saying: so much food; so little time!

These might give you a few new places to try, but they’re not restaurant reviews — your choices will be up to your own tastes and preferences.

Before this, canned grocery story chowder is all I’ve ever had. Progresso New England chowder is not bad, but it’s not fresh from the sea and it doesn’t have the huge chunks of seafood like you get in NS chowder. If you’d like to try some, here are few places that left an impression…

The Crow’s Nest was the one recommended by the RCMP officer who came to check on us — as soon as we were done with quarantine, it was the first place we tried. We called ahead for reservations each time we went. It’s a bit off the beaten path up in the hills near Granville Ferry, but the views you get on the way there of the Bay of Fundy make that worthwhile.

Likes: lots of lobster, fish, scallops, and a fairly large shrimp. Water-based broth. Good service and pleasant staff.
Dislikes: contains a fair bit of potato as well as the seafood.

The Bayport Pub near Lunenburg was recommended to us by our new neighbors. It’s best to have a reservation since once the border opened up, we weren’t able to get a table without one. It’s set in a peaceful rural setting with outside seating. They have full menus on their website.

Likes: creamy and tasty with four huge scallops greet you and chunky seafood.
Dislikes: it’s probably just me, but there’s something in it that my digestive system doesn’t like. It’s happened both times we’ve visited — the evening after I eat it, I’m up most of the night with “issues”. This wouldn’t stop me from going to the restaurant as they have lots of other good food, I just wouldn’t be ordering the chowder again as good as it tastes!

The Grand Banker is right on the waterfront in Lunenburg, directly across from where the Bluenose II docks when she’s in harbour. It’s not a huge seating area and is always busy so you definitely need to book a reservation. We were seated right away because we agreed to eat at the bar. Jackie had the Caesar salad with salmon and I had the chowder. They also have full menus on their website.

Likes: creamy broth and tasty with lots of seafood (haddock, shrimp, scallops, and clams), broken up into smaller chunks so you don’t have to bite it in two to get it comfortably in your mouth.
Dislikes: the sliced muffins that came with it were over-toasted and not really edible, but that was a minor inconvenience — I was here for the chowder!

The Paddy’s Brew Pub we went to (there are two of them) is in Wolfville, a university town with a noticeably younger average age than we’re used to. We met friends for lunch and missed the live music in the evenings – so it will be worth another visit.

You can make reservations online (although we arrived at noon and didn’t need one) and they have a newsletter to keep you up on what music is scheduled, menu changes, their brewery, and special offers.

Likes: the chowder is pure seafood (lobster, haddock, scallop and shrimp) — not a trace of a potato anywhere.
Dislikes: the broth was creamy, but thicker than most — almost pasty. Even though the rest of the chowder was very good I was not in love with the broth.

The Chowder House on Main is in Tatamagouche (Tata-Ma-Gooch), on the north side of the land bridge between NS and New Brunswick, just across the water from PEI. Between renovation chores, we made the three-hour trek to see Tatamagouche for ourselves. On the main street, I quickly spotted the CHOWDER House on Main: “lets go there” I said. We didn’t need a reservation but I think we were lucky as it was rather busy. It has both indoor and outdoor seating — we chose the outdoor.

Likes: All seafood (clams, shrimp, scallops, and fish) and no potato, seasoned perfectly, and served with warm bread. The broth is a little creamy but not overly so and enough seafood to keep me full until dinner time. I’m rating this chowder as my favorite.
Dislikes: Honestly, absolutely nothing that I can think of.

When I told my daughter that I was taking my wife to the Best Western for dinner, she laughed. But Twenty-Seven South is a very good restaurant. Bridgewater folks know it well and the pot roast is a local legend. It has indoor and outdoor seating and service is normally very good. Full menus are on their website. We typically don’t need a reservation to get a table.

Likes: Their chowder is the only one I’ve had so far that has mussels-in-the-shell mixed with large chunks of lobster, shrimp, fish, and scallops bathed in a lighter broth.
Dislikes: lots of potato, probably about 30 percent of the content of the chowder.

So far our favourite fish dinner is at the Fort Anne Cafe, a small rustic restaurant in Annapolis Royal across the street from the historic Fort Anne.

At some places, fish dinners have more batter than fish. Here, the batter on the fish is light and sparing, which means that most of your dinner is fish — haddock to be exact! It normally comes with french fries, but we have their extraordinary cole slaw instead.

The Cafe owner, Jeff, has an arrangement with the Annapolis Brewing Company next door. You can buy your dinner at the Cafe and then take it to the Brewing Company’s large dining room next door and enjoy their craft beer and cider — kind of a nice arrangement.

I had a sampler of six of the beers (and I found at least two that I liked) and Jackie fell in love with the cider pretty quickly — the cranberry flavour was her favourite. (We’ve both become fans of cider since landing in NS.) The brewery also has merch: t-shirts, glasses, hats, growler bottles to fill up with your favorite cider and take it home!

I have to say, we were spoiled in our last home in Washington/Chocowinity, North Carolina, by the drinks and the staff at the Giddy-up Coffee House. We loved their hot chocolate and were disappointed in what we found for hot chocolate in Nova Scotia — that is, until we found Aroma Mocha Cafe in Bridgetown.

I admit that soon after we were out of quarantine, we were searching for a good hot chocolate to make up for the loss of Giddy-up — and we tried them all: Timmy’s, various restaurants, and even Starbucks in Halifax. But none of them had the zing we were used to.

As soon as I sipped my first one from Aroma Mocha, I knew we had found the best hot chocolate in Nova Scotia — so far. Roma, who runs the place, is a doll and makes every visit a pleasant one.

I think before we landed in Nova Scotia, cider was a relative unknown to us. Sure, we’d heard of it, but I usually associated it will a rather tart apple-based drink that wasn’t at the top of my go-to list.

Since arriving here, that’s all changed.

It’s apparently one of the oldest drinks in the world and there are cideries all over the province. The aforementioned Annapolis Brewing Company introduced us to their cranberry cider, which we really liked.

But then we met a friend in Dartmouth at Lake City Cider, where I discovered their Strawberry Cider — one glass and I was hooked. In fact, I bought what they call a “growler” which is a bottle you buy from them to fill up with your favourite and take home. I need to go back for a refill already!

There are lots of flavors at each cidery and they literally dot the landscape. I’ve just become partial to the strawberry variety — Jackie still likes her cranberry one!

Oh, and one more thing…

We spent some time with friends from Ontario at their Nova Scotia summer home up near Minas Basin and they introduced us to a local concoction called Concord Grape Lime Gin Soda. They split a can in two glasses for us and Jackie and I agreed this was a great new find.

So we went to the distiller’s operation, Barrelling Tide Distillery, and got some to bring home — Jackie says it’s her favorite now. and we had a quick tour of their shop and distillery.

Personally, I still like the strawberry cider, but this is in the running for second…

Do you have a favorite place to eat or drink in Nova Scotia? Share your story with us in the comments below and let’s share the establishments that deserve our business.