Eight years after getting goo-goo eyed over the first drone video I ever saw, I’m finally on a mission to learn to fly and shoot video.

But what took me so long? — follow along and find out.

I’m learning about the mechanics, the dynamics, the cinematography (and the law!) of flying and capturing great video footage with a modern drone. If we’re lucky, we might even get a guest post or two from people who know what they’re talking about… !

Eight years ago, as I was completing a seven-year stint as a professional photographer, I stumbled over this early drone video and I was just dumbstruck over what these little flying machines could do. This was the video that grabbed me:

I’d been experimenting with video at weddings, but this was something entirely different. I’d never seen anything like it and it just totally pulled me in. I’m sure my mouth was hanging open as I hung on every frame for all 7 minutes and 42 seconds.

This was something I wanted to do!

But back then drones were big and expensive. It seemed a bit risky to spend a few thousand dollars on a complicated remote helicopter to lift $5000-worth of my DSLR camera equipment into the air to surely shatter to pieces should it drop to the ground.

Besides, I’d had trouble with directional perception when I raced radio-controlled cars in my younger days — and a similar problem would be a sure-fire way to destroy the drone, the cameras, AND my bank account!

Then, last year when we first contemplated our move to Nova Scotia, a series of YouTube videos done by DaveyandSky from Cape Breton caught my eye. Dave Anderson captures breath-taking videos of the natural beauty of the province. Seeing Nova Scotia’s natural wonders through his lens was one of the things that swayed us to make the move.

It also drew me in to the world of drones again.

Shortly afterwards, I saw an ad on Instagram for an entry-level drone for about $75 with a set of features that sounded too good to be true. If I crashed it while learning to fly, I’d only be out $75 — which was a lot better than thousands of dollars! I decided this was a good way to get started.

I bought it and then checked the tracking email — I got just a little concerned when I saw the starting point was in Dongguan, China…

As you might guess, it WAS too good to be true. For $75, I got a drone that was a knock-off of a popular, more expensive model. This one would barely fly straight. On my first flight I barely missed hitting Jackie and on the second flight I was unintentionally trimming the leaves at the bottom of our front-yard trees! It was not stable at all in flight and I never did figure out how to actually record the videos I was seeing on my screen.

As the move to Nova Scotia drew closer, understanding the drone took a back seat to packing and downsizing.

One evening, fed up with organizing moving boxes, I stumbled over a Facebook seminar put on by Drone Launch Academy, and tuned in just to pick up a few pointers. The talk was very good and these guys obviously knew what they were talking about.

As part of the seminar, they were giving away a drone. Of course I entered and then hung around long enough to get the secret password to increase my one chance to 50. I often enter these things and nothing happens…

Except, this time it did…

I woke up to a very cheerful email in my inbox letting me know that I was the proud owner of a new Mavic Mini 2 drone!

Wait — was this real? Perhaps this email was from my long-lost uncle in Nigeria wanting to send me millions…

In this day and age, I was skeptical — but I phoned them and it was real!

A couple of weeks later the DJI Mavic Mini 2 arrived. Its just under 250 grams, which means you don’t need a drone pilot license to fly it. It has a 12 megapixel camera and shoots video and stills (4000 pixels on the long side). It shoots a maximum of 4K (3840×2160 @ 24/25/30fps) and has a video throughput of 100 Mbps. It’s a pretty good entry-level drone and great to learn on if you eventually want to move up to something more sophisticated.

Which suits me fine — with the directional challenges I used to have with radio-control cars, I’ll need all the help I can get.

So I bought a course from Drone Launch Academy (it was the least I could do for their gift of a $500 drone): Aerial Video from A to Z, which promises to teach me to fly, to take great footage, and to be wonderful at post processing — all at a special price (remember? I’m Scottish).

But then move to NS demanded unrelenting attention — the drone stayed in the box and the course stayed unused for the better part of a year.

Now that we’re in our new home and almost all the renovations we can afford are largely done, there’s finally time to learn about drones again. Tell the Nova Scotia birdies to watch out…

Next post: I took my first flight, and you won’t believe what happened next!

(See what I did there? Did you like that clickbait teaser?? Me neither — that’s why I typically don’t use them… )

2 more successful drone flights, but then… 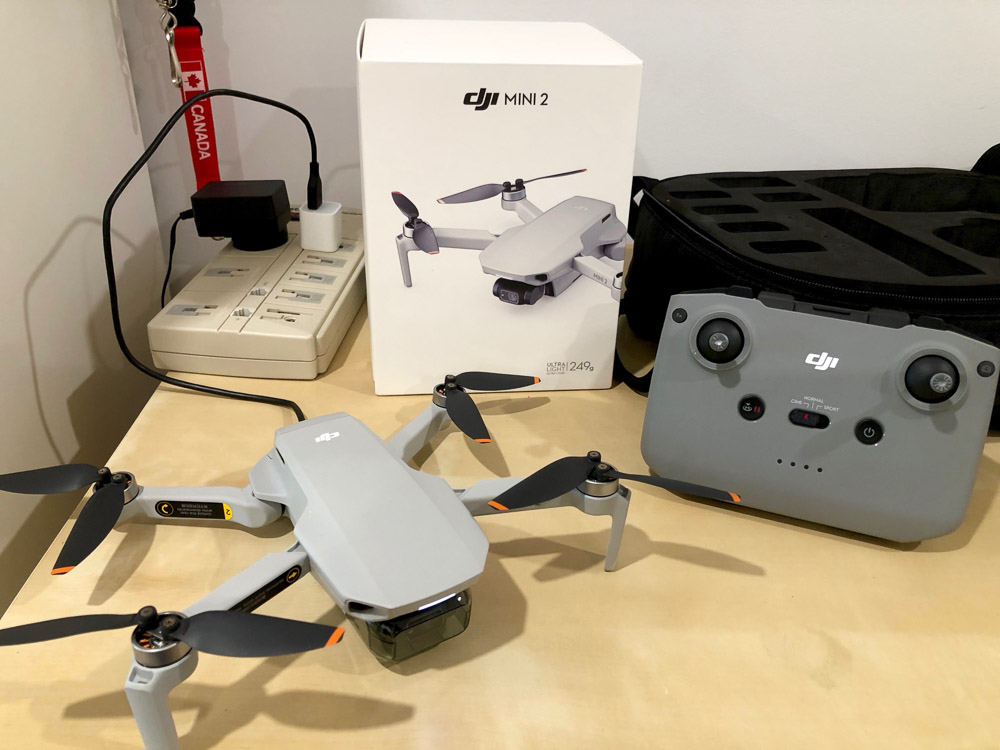