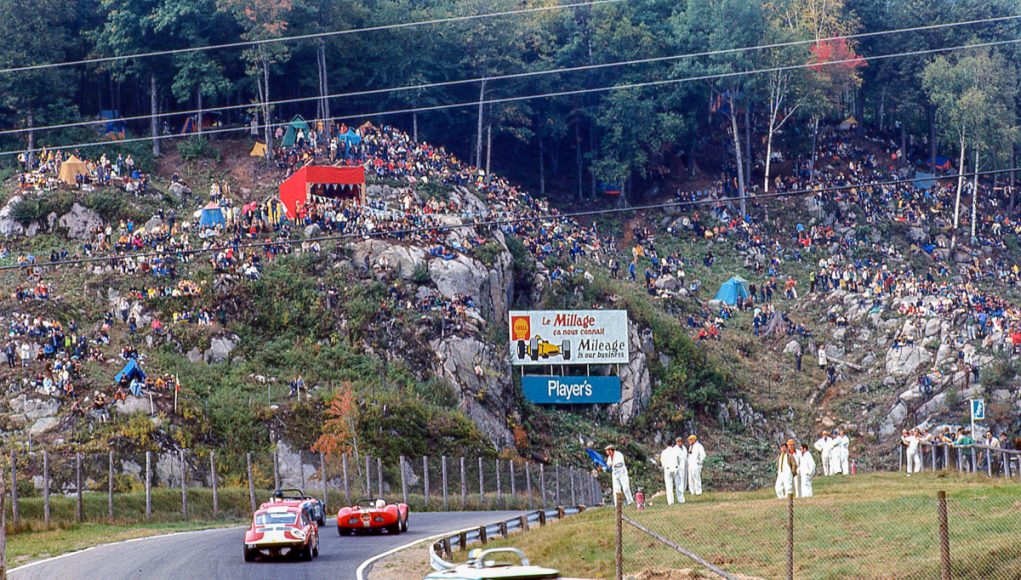 In 1970, I was a fourteen-year-old who’d just been bitten by the car racing bug. When my new friend, David Sampson, took his Scalextric set out of it’s box — that was it. I was hooked.

My Dad was a former news photographer and when he started taking me to car races, he couldn’t resist bringing his camera and practicing panning.  That year we went to a race at Rockliffe Park in Ottawa and the 1970 Canadian Grand Prix at Circuit Mt Tremblent in Quebec.

I was the racing enthusiast, so he wasn’t dazzled by the big stars and famous cars so he ended up with some really nice shots of regular racers doing their thing.  Here’s the ones I still have; perhaps some of you out there might know these cars and drivers and can help fill in some of their names.

The Rockcliffe park race was a one-off race held on an old Department of National Defence-owned airfield.   Apparently the surface was so rough, one marshal compared it to the pothole-ridden springtime streets of Ottawa…

It had a race in the Canadian National championship for Formula cars and six supporting races.  The event included notable Canadian drives such as Gord Dewar, Ted Powell, Ken Huband, and Wayne Kelly, and Brian Robertson.

Attendance was free and they attracted 25000 spectators to the 2.2 mile circuit. Rain ended the feature race early (although you wouldn’t know it by the blue skies in Dad’s pictures) and it was won by Eppie Weitzes.

This was the first and only year the Rockliffe airfield was used as a venue for car racing.  Lack of sponsorship and an inability to get the Department of National Defense to fund the much-needed re-paving of the runway surfaces put an end to any notion of further racing there.  Read the full story of the Rockcliffe event in the Motorsport Club of Ottawa’s publication “The first 50 years”.

In September, we went to the Canadian Grand Prix at Mt. Tremblant, the last time an F1 race would be held there.

I recall Dad standing at the side of the track panning furiously as the cars in the supporting races streaked past, and he got these amazing pics of some fabulous classic cars.

By sharing the above images on Facebook, we learned more from Yves St-jean about the #24 Cobra shown above. It’s serial number CSX2002 and was the first “works” race car shipped from Pittsburgh to Shelby’s own workshop for use by the Shelby American team and driven by Ken Miles, Dan Gurney, and others in 1962 and 1963.

Subsequently, it was owned by a succession of Canadian racers: first by Comstock racing in 1963 for Eppie Weitzes, John Cannon, and F Hays, then by J Ouellet of Rimouski in 1964, and Dr JP Ostiguy in 1966. Then it went to G Lafleur for A Samson in 1968, and then to Michel Tremblay (shown in the car in the above picture) in 1969. Tremblay raced the car until 73.

The car is now on display at the Shelby American Collection in Colorado after being found in dismal condition in a Massachusetts barn in 1978. Read more about CSX2002 and it’s sister cars.

It was also the first Grand Prix in which the Tyrrell team dumped their March 701 and raced their new self-built Tyrrell car. Dad photographed the Grand Prix as well, at least until Stewart retired with a broken stub axle.

Unfortunately, I don’t have his negatives and these are scanned directly from double-sized contact prints. They don’t have the quality I’d get from the negatives — sorry about that — but I’m sure some of you will still want to see them.

I promise that if I ever find the negatives, I’ll replace these.

I think I spent the rest of my photographic life trying to live up to his standard. I can only imagine what he’d have done with a modern digital camera.

All pictures on this page are © estate of Bill Cadzow. No reproduction permitted without the copyright holder’s permission.