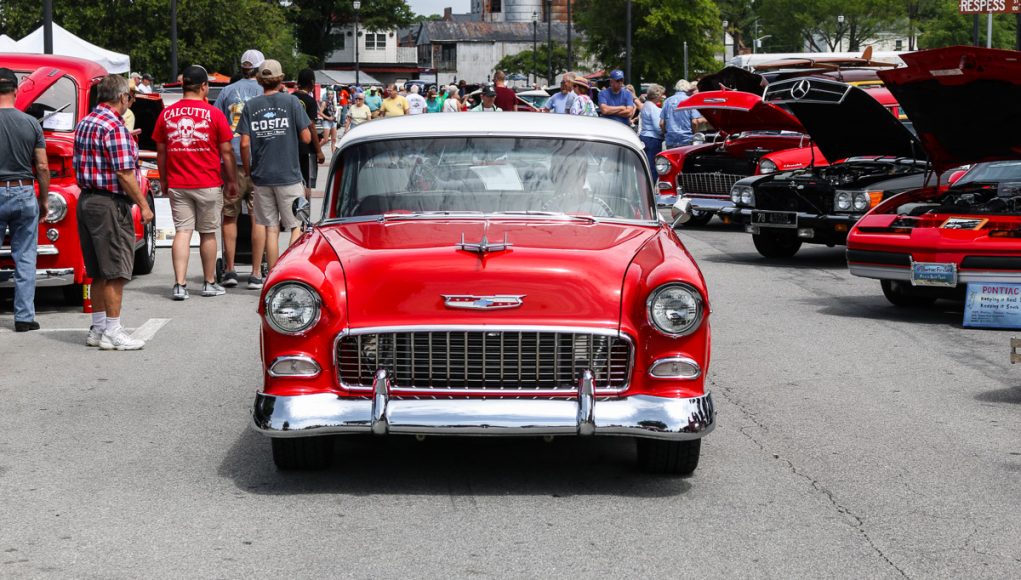 More than 70 vintage cars were on display at the Washington waterfront today — and if you didn’t already know what old cars looked like, you might be forgiven for thinking they just rolled off the assembly line yesterday.

Lovingly pampered and restored by enthusiasts from the Coastal Plains Chapter of the Antique Automobile Club of America (AACA), the display vehicles ranged from just a few years old to more than 100 years of age.  The oldest one I saw was a 1916 Ford in near-perfect condition.

“I’ve been messing with cars all my life,” said Willie.  “But I didn’t have an antique to restore till later in life — you have to wait till you get older till you think you can afford it,” he added with a chuckle.

Willie has been the club’s president for the last decade or so.  He says the Washington event is the only show they organize each year.  They’ve had up to 110 entries for past shows, but they consider a good turnout to be around 75-80.

There’s more photos in the client gallery — order prints from there too if you like.

When they’re not displaying their cars, the club organizes road tours to the coast for members and their vintage cars.  (Yes, they are driven on the road — most, if not all, of them were driven to the show.)

Coastal Plains is not the only group of vintage car enthusiasts in North Carolina — the AACA has chapters all over the counry.  Some of those other clubs organize similar shows in Greenville, New Bern, and other communities in the coastal areas.

There’s a few local members too.  Ginger and Jo Gerhes live in the Washington area and have had their 1931 Ford for six years.

“Jo works on it all the time — even last night before driving it here!”   Ginger says they’ve been pursuing an overheating issue, but that Jo thinks they might have that problem fixed.

“You have to be someone who likes to tinker with cars,” said Jo.

Willie had his 1931 Model A Ford on display.  Its a four-door milk-chocolate-brown hardtop and reminds me of the kinds of cars I’ve seen in Bonnie and Clyde movies.

He smiled and said: “Everyone likes old cars, older people in particular and there’s still a bunch of us left.”

There’ll be another vintage car show in Washington in October called Smoke on the Water, although it is not organized by the Coastal Plains club.