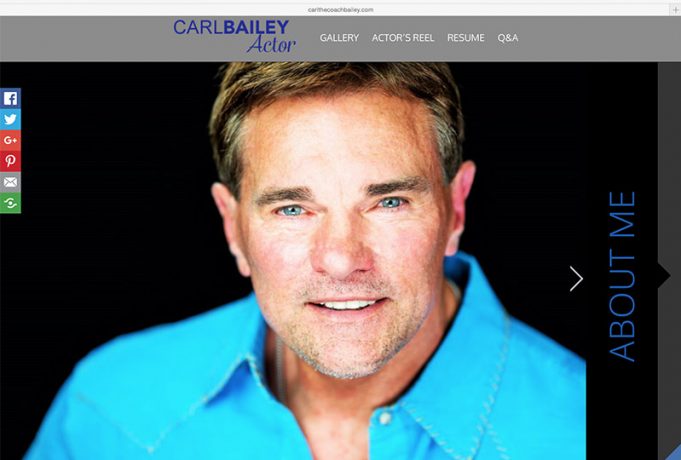 DerekCadzow.com creates imaginative, engaging websites for select clients. This series highlights some of those sites and tells you the story behind each of them. Got a project in mind? Please let us know about it from the contact page.

Website: https://carlthecoachBailey.com
Business: Actor
Purpose: calling card for casting, place for actor’s reels, photographs, for publicizing his abilities and depth as an actor

Carl “The Coach” Bailey took one of those life decisions many of us daydream about. Several years ago, he left his career as a high school teacher to pursue his dream of being an actor.

It didn’t take him long to achieve some success. He’s been in more than 80 productions, including major films such as Quentin Tarantino’s Django Unchained, Now You See Me, When the Game Stands Tall, and Parkland, working with some of the industry’s top actors and directors.

“Coach” approached us for several websites. The first (pictured above) was a simple site he could send people to from auditions, meetings, casual conversations to showcase what he’d done in his new dream job. CarlTheCoachBailey.com became his actor’s website and it hosts:

It didn’t take long till Carl was back as a producer with a new movie called College Bound — the story of Isabella Santiago, a college-bound high school student who is kidnapped on a mission-trip. Her family, two best friends, and would-be college roommates deal with fear, blame, and anger for the next four years while a special team of agents go underground to get answers.

Script Writer Michael Arnold introduced Carl to his story of human trafficking, which is actually based on true events. The project afforded Carl the chance to test his production abilities on a major movie.

“With my background I have always had the sense that I had the skill set to get a feature film off the ground and in the can. Now, I guess we will see if I really do.”

The web project for collegeboundmovie.com publicized the forthcoming movie as well as raising awareness of the largely hidden issue of human trafficking. It included:

We also created new collegeboundmovie.com email addresses for the team and helped to get the email running on their devices.

WordPress sites are easy for people to administer and change. This was be an important factor for this project because, as the movie production reached the filming, post-production, and release stages, the team could continually update the site by themselves with new information to help market the film and nurture it’s fan base.

Most recently, The Coach wanted a high-school sports news site. You can find out more about that in another post.

Got a web project in mind or want to learn more about WordPress? Send us a note with what you’re looking for in the contact section.