Home Our Washington life The Art of Tea 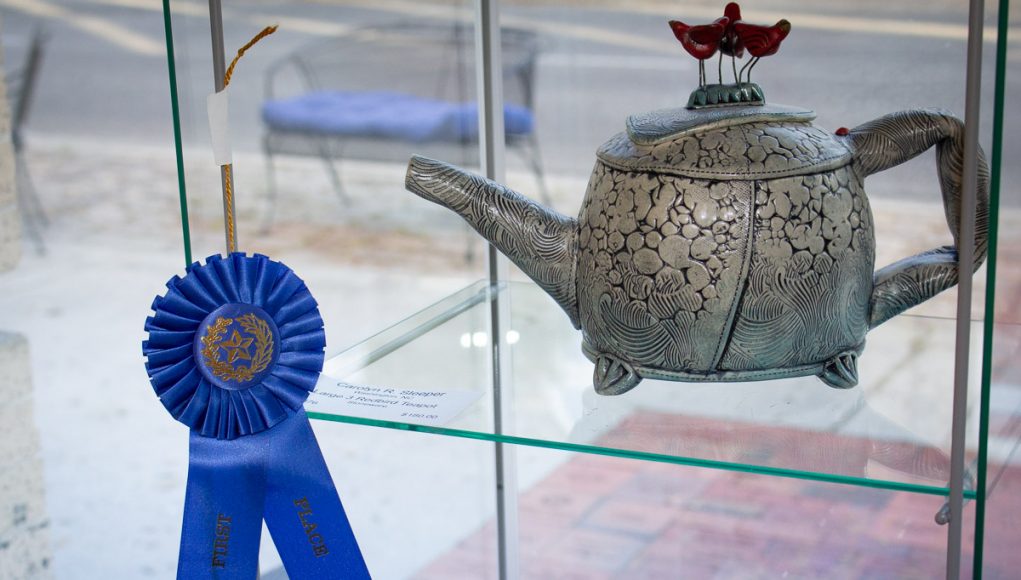 More than 30 artists from as far away as Georgia submitted 46 pieces of two- and three-dimensional art for the inaugural Art of Tea: Tea Pot Exhibit, held early in April at the Turnage Theatre.

Organized by Arts of the Pamlico, the show’s opening reception attracted visitors and artists alike to the Main Street landmark to see the tea-pot-inspired artwork and the award winners’ entries, chosen by juror Beth Blake.

According to the exhibit flyer, the show was “inspired by the process and art of making tea, going from a Camellia Sisnensis tea plant to a dried tea leaf. The tea pot itself has undergone a transformation and has become more than just a functional pot to steep the tea leaves in”.

Thad Aley, who has been the Art Exhibits and Event Coordinator for Arts of the Pamlico since 2017, says the idea for the show also came from a similar show outside of Raleigh, which happens every three years.

“We were attracted to the idea because it would help us to embrace three-dimensional works of art as well as the more common two-dimensional pieces.”

Apparently the effort was a success as the number of 3D entries equaled those in the 2D category.

Calls for the show went out in February and artists had two months to complete their pieces.  “Because it was the first time we’d held the show, I feared that we’d have no entries, but friends and artists kept telling me: ‘Create it and they will come.’”

Aley says that the sky was the limit:  artists could create traditional pieces that were actually designed to function as real pots or, at the other end of the scale, imaginative pots that were non-functional and purely works of art.

Indeed, viewers of the exhibit would be excused for thinking it was a tea shop gone wild as some of the tea pots took forms unimagined by ordinary mortals (see pictures).

One local artist seemed to achieve a pleasing combination of both ends of the spectrum.

“The three pots I crafted can be used to steep your tea and are perfectly balanced for pouring from a full pot”, said William Aley, creator of three of the designer-pots including this one called Water Buffalo for Tea.

Artists vied for six prizes, including two first place awards: the two-dimensional first prize went to Teresa Cold Rogers for her piece called A Spot of Tea 1 and the three-dimensional winner was Carolyn R. Sleeper for her Large Three-Redbird Tea Pot.

Jackie Weatherly-Cadzow, a first-time entrant at Turnage and new arrival to Washington, says she entered the show because it sounded fun and unique. Her piece is a whimsical felted teapot, obviously non-functional. She plans to enter more local shows and support the local art scene.

She’ll have lots of opportunity.

First, the tea pot show’s success prompted many to ask about another show next year. Now organizers and planning to make the tea pot exhibit an annual event.

Second, Arts of the Pamlico hosts about 36 shows each year. There are three galleries at the Turnage Theatre facility and there is typically something going on each month.

The biggest and most popular event is the Fine Art Show that has been going continuously for 55 years.  Typically held in November each year, recent versions of the show have attracted around 160 artists from 16 different counties.

Fine art includes everything that is not photography.  Photography is recognized as art and has had its own show in August at the Turnage for the last 11 years.

Arts of the Pamlico are changing the basis for their shows.  It used to be that shows were organized by local art groups and artists had to be members of those groups to enter.  In the future, shows will be based around themes and the only entry criteria will be that the art pieces will have to fit the theme.

Says Aley:  “We’re hoping that will open up participation in our shows to many more artists.”  (We’ll have more on this subject in an upcoming post.)

They publicize their events mostly through social media (the artist of the teapot entry from Georgia learned of the show from Facebook) and through their periodic emails.   You can sign up for their email list here.