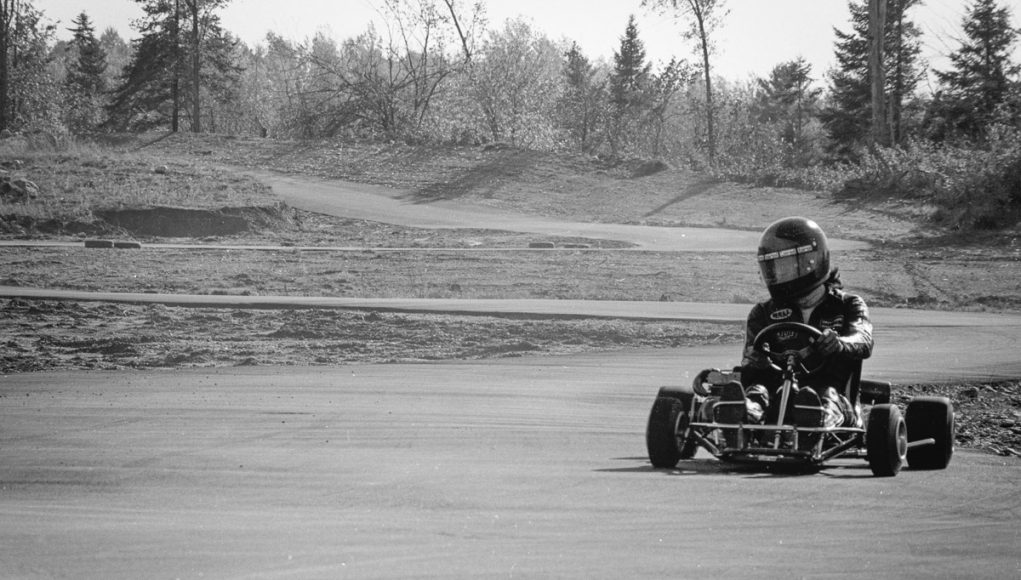 This morning we lost a very special friend, Jon Snadden. Jon had been in hospital for a while and passed away peacefully this morning surrounded, as I understand it, by his family.

Although I hadn’t seen Jon in many years, his friendship still meant a lot to me. You see, when I was racing, Jon was my main rival on the track.  He was a driver that I could keep tantalizingly close, but could rarely pass.

I don’t remember the day I first met Jon. I do remember that it was at Capitol City Speedway in Ottawa late in 1976 when the local kart club was just getting started.  I was the proud owner of a new racing kart and had bought full racing leathers that were white with my first name in blue on the back. I looked snazzy and was ready to take on the world.

Then Jon turned up with black full-length leathers and an Italian kart (Birel) which, compared to our sit-up-straight karts, allowed him to drive from a semi-reclined position and it looked much more racey than ours. They were very fast straight out of the box.

So much so that, during the winter, I took a hacksaw and welder to my kart and it looked a lot like his before the 1977 season got started!

He was often in front in almost every race with me right behind.  He knew how to make his kart seem wider than it physically was, so even on those occasions when I was actually faster, he made it damned difficult to get past!

At one of our first big tussles at Ottawa’s Museum of Science and Technology, two young boys ran up to us before the race.  They had bet each other on who would win: Jon or me.  Apparently my backer bet on me because I was dressed in white.

This particular race was all about Jon and I, and it was actually one time I did manage to pass him. Unfortunately I passed in a yellow-flag zone, so I had to let Jon back through or I was going to be disqualified :/   I’m afraid that white leathers didn’t help my young fan win his bet as Jon held his ground for the rest of the day and won the race with me close behind in second.

He told me years later that our battle that day was one of his best memories of the time.  But we both agreed that, in our “advanced” years, that it was something we didn’t want to attempt again!

Jon was generous with his technical knowledge.  He taught me how to take apart and rebuild my kart engine by alternately baking it in the oven and then freezing it in the freezer (to properly separate the crankshaft from the block). It was fascinating stuff, but not something our wives were thrilled about.

He helped others the same way.  Fellow racer Fred Zufelt tells of the time when, after rebuilding his engine between races, Jon tested it out by driving his kart in his Dad’s basement – he ended up losing control and crashed into the basement wall!

Even though he was fast and technically adept, he didn’t take things too seriously.

One time he had bought a new Simpson helmet, which looked a little like Darth Vader’s head.  Jon showed up at the track with two bobbling insect-like antennae fixed to the top of the helmet.

Another time he showed up at the track with a light blue t-shirt with SNABBON written across the back in big black letters. His explanation: whenever he got his name in the newspaper it was always spelled wrong so he figured he would play along!

I also remember a warm early-summer evening when we were camping at a track near Belleville.  Jon’s kart engine lay in pieces as he tried to repair a problem and the junebugs kept bouncing off the engine parts, his head, and even off his face. Finally he got so annoyed he picked up his rubber hammer and started beating the crap out of them. He was angry but we were all rolling on the grass laughing our heads off.  It didn’t take long for him to start laughing too; but he growled that he still hated junebugs!

Jon won the 1977 kart championship in Ottawa.  Later, he sold his Birel and bought another Italian kart, a BM, to compete in the Canadian Pro Kart series.  Unfortunately, he didn’t repeat the same level of success there and soon left the sport altogether.  (I actually ended up with his BM a little later).

Jon went back to his first love: motorcycles. He used to tell the story that, as a teen, he was wild enough on motorbikes that he was no longer allowed back in the entire province of Nova Scotia! He may have been exaggerating that a little bit…

Jon established himself as the resident Ducati expert and ended up working on bikes for people from all over the continent.  He said “They’ve always been my passion and I’ve been really lucky to be able to do this.”

Jon leaves behind his family: wife Sandy and son Jesse.  I know they’re feeling his loss tonight and we express our sincere condolences for the departure of a loved husband and father.  I recently lost my father too, but was comforted by the knowledge that he had lived life the way he wanted and had realized many of his dreams.  I hope Sandy and Jesse can be comforted by the knowledge that Jon, too, lived out most of his dreams.

Our karting and racing years were rich in friendship, learning, and competition, and I’m so glad that we pursued it with such passion.  But that was 40 years ago. Today, the events live only in our memories.

With Jon’s passing, part of that collective memory is lost and now it is up to we who remain — Sean Sweet, Fred Zufelt, Jane Wagner, Paul Joinette, Jeanne Joinette, Barry Thoms, and I, among others — to hold those memories and pass them on. It’s a strange feeling that perhaps sometime in the future there will be no one left to share the memories with.

I guess that’s another reason I like photographs so much.

Several people have mentioned that it brought home to them the fragility of life and how quickly everything can change.  One former karter told me that Jon had invited him over to visit but that he had never gone and now he felt bad about it.  Jon had also invited me over when I was next in Ottawa and I too never made it — a lost and unrecoverable opportunity.

You can be sure that, if someone asks me to come by in the future, I won’t be passing up the invitation because you just never know.

Peace my friend; peace to you and your family.

Two stories remembered during the night:

One year, Jon bought Continental tires for his kart, which was a brand no one else had. They wore down a little faster than our Goodyears and as the tire canvas became visible, we warned Jon that he probably needed to replace it. Undeterred, Jon filled the tire with some sort of white goop that was supposed to keep any puncture closed, and went back out on the track. Of course, the tire punctured – explosively – and his pristine black leathers and helmet ended up coated with a white spray of this goop from head to toe. Jon was not happy, but still laughed along with the rest of us.

The last race in which we competed together was around 1987.  It was a one-off endurance race at the Quyon Circuit. He and I were to drive Dave Elliott’s Hutless kart for most of the race because we were pretty light and then Dave would get in for the few laps required of the third driver to make it legal. That was the plan!

Jon started the race and had a “coming together” with a few karts at the 90-degree left-hander at the end of the straight. He and the kart were OK, but the engine flew off into the dirt still attached by the throttle cable and fuel line.  As was our habit in these kind of situations, Jon blipped the throttle to keep the engine going – except this time it was jumping and flipping around in the dirt!  Jon said he was so mesmerized by the sight he didn’t actually shut it off right away!  Of course we ran over there and put it all back together for the rest of the race, but I can still see Jon sitting in the kart staring at this engine flopping around like a wet fish on the ground!