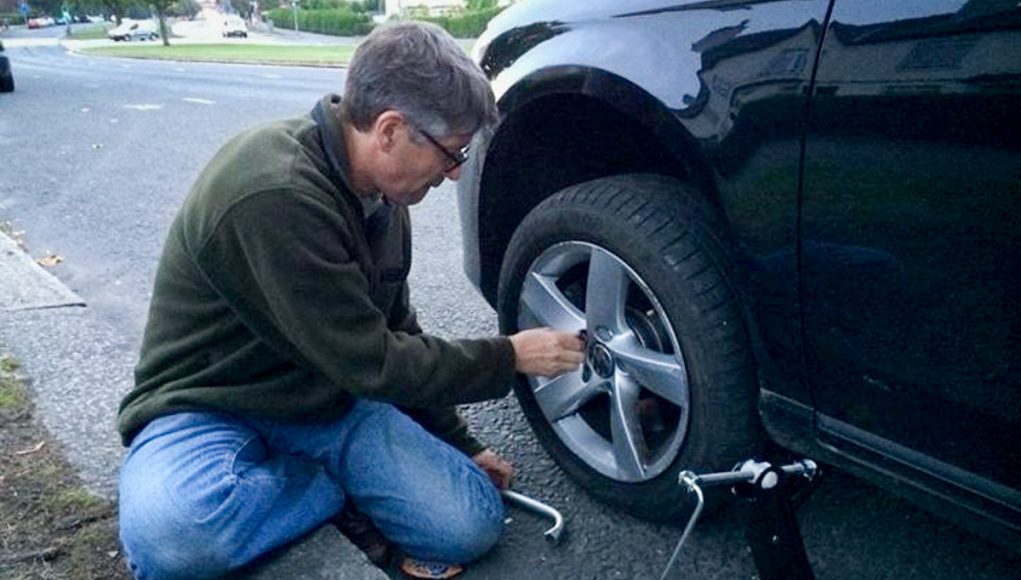 Some of you asked about my Facebook posts Thursday night and what made me so disappointed in my hometown of Glasgow.  Well, either I’m getting old and senile or Glasgow is more difficult to navigate than it was in the past.

We had just spent several days driving through the Western Hebrides on the left-hand side of very narrow country roads, driving from what would normally be our “passenger” side, getting on and off ferries, and learning how to deal with a car that shuts off its engine every time we stopped. All unfamiliar activities for us but with no mishaps or worries. So far, so good.

But then we hit Glasgow.

Even though we’d updated our Garmin GPS with British maps, it doesn’t help if you don’t have the hotel address loaded in. Our American phones were not connected to the European network and finding our way to the hotel was going to be difficult.

Already getting a bit frustrated, I pulled over to the curb to try and reset the GPS. But I steered too suddenly and hit the squared-off curb, (not rounded like in America) which tore a nice one-inch gash in the Volkswagen’s tire — you could hear it pop.  I stepped out of the car to look; yep, flat as a pancake.

A group of locals, chatting on the sidewalk, turned to look at this crazy car and driver. You could just see them thinking: “Oh, he’s not from around here…”

We got the spare on and finally found our hotel, but it was more like those pod-rooms you hear about in Tokyo than a normal hotel room.

The room was only as wide as the bed. The wall between the sleeping area and the shower was almost transparent and that wasn’t going to do for my lovely wife.

The straw that broke the camel’s back was that the pillows and comforter were down filled and there was no alternative (Jackie is allergic to those). Clearly, this wasn’t going to work…

We got on the hotel phone and quickly rebooked at a more familiar name — the Holiday Inn Express — closer to the airport.

Finding the airport wasn’t any easier than finding the first hotel. For a long, frustrating time it seemed like we were going in endless circles trying to get out of downtown Glasgow. With each new corner, we found ourselves trapped in another bus lane or going the wrong way down a one-way street. And every time I stopped, the damn engine would shut off!

A cabbie pulled up beside us at a red light and told us we’d been photographed twice in bus lanes and would probably get tickets. Very exasperating!! I said thanks and could he tell us how to get the hell out of this place…

Even after the cabbie’s instructions, we had trouble finding our way out.

With my blood pressure reaching epic heights, we finally found the airport. By this time I was fuming and I made the first right-left error of the week by trying to turn into the hotel parking lot in the right lane instead of the left! I quickly backed out and got into the correct lane and stopped at the gate. Argh…!!

I reached out to grab the access ticket and, of course, the engine stopped! This time it wouldn’t start…

It took three tries and, as it started, the gate came back down! I reached over for another ticket and we finally got into the hotel. Mr Bean’s writers couldn’t have planned it any better!

Fortunately that was the last of the mishaps and I was glad to settle in to the hotel for the night.

Tomorrow we’d have to find out about the mounds of traffic tickets that supposedly awaited us downtown and see how we could deal with them. How did we fare? — read on.