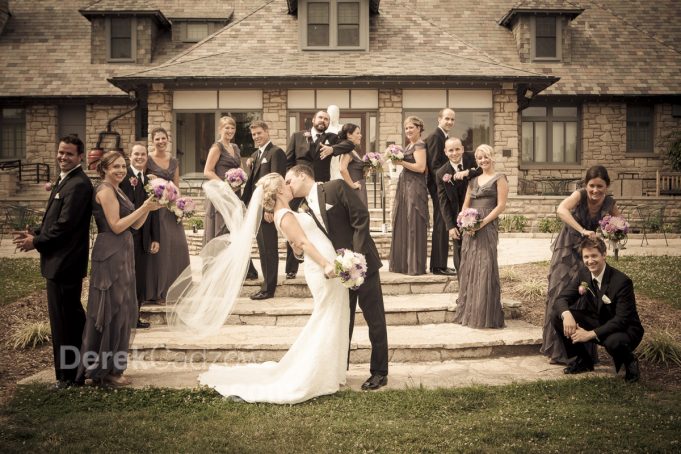 The reception for Kerrie and Patrick’s wedding was held at the fabulous Peabody Opera House (now the Stifel Theatre) in St. Louis, Missouri. We had talked about wedding photography for the pair around the building’s architecture, but I had no idea we would end up standing on the opera stage itself to shoot one of the most iconic wedding images I’ve ever shot.

But I’m getting ahead of myself…

After the ceremony, we were scheduled to go to Laumeier Sculpture Park, Citigardens, Keiner Plaza, the Cardinal’s baseball stadium, and the Peabody. I think the only place we didn’t make was Keiner Plaza because that happened to be the day that Occupy STL chose it for their demonstrations and it was incredibly messy!

In the past, we’d had the Laumeier park scheduled for other wedding photography events but, for some reason, it always seemed to drop off the calendar before the actual shoot day. Thankfully, this time, that didn’t happen because the park’s sculptures are huge and the grounds are full of great places to shoot. It didn’t disappoint.

Once we got to Peabody Opera House, Kerrie ushered us into the opera theatre itself. We took a few images with the entire wedding party and then, with just a few minutes to go before the reception started, Kerrie said she’d like one of she and Patrick on the stage.

The subdued theatre lights on the seating behind us was dramatic, so that was a natural background for our image.

A slow shutter on the camera captured the theatre’s ambient light and a couple of off-camera Quantum Qflash lights lit our newlywed couple.

The initial results were soul-stirring, but then I looked up and saw the wonderful contrasting light of the blue dome and it just HAD to be part of the image. Working quickly, we wrapped up in time for the start of the reception.

Little did I know that we had just captured an iconic wedding photography image that would get so much attention!

Kim and Eric — warm love for a cold day