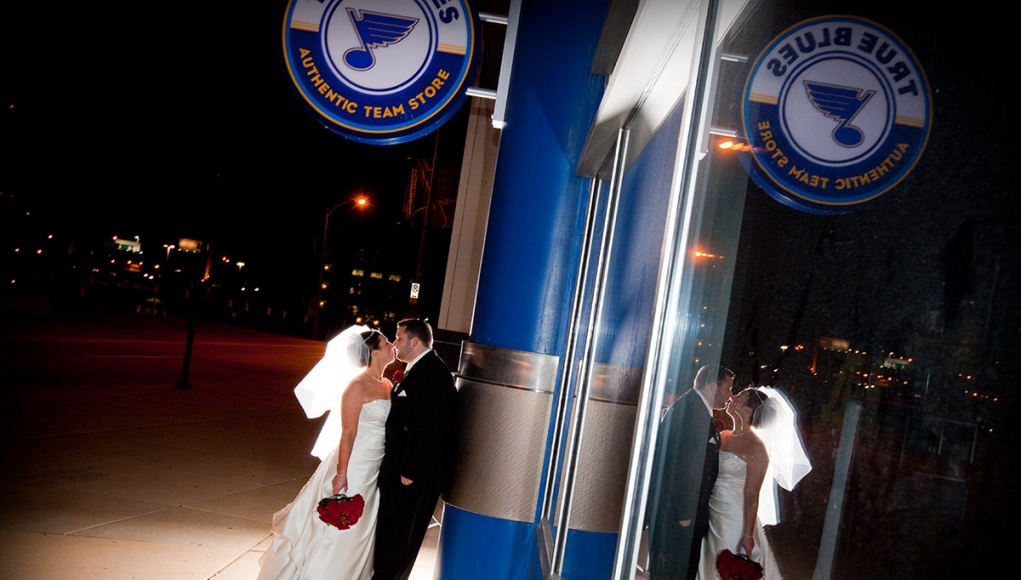 (Photo above by Rhonda Jean)

I’ve learned that winter weather, in the mid-west, can be a lion or it can be a lamb.

Last year, our first winter here in St. Louis, it snowed once and the ground remained white for only a couple of days — a far cry from my days in Canada where you could be socked in from Halloween to the end of April.

So in planning her December wedding, Kim was concerned about rain and we made sure that we had several in-town indoor venues lined up in case we couldn’t photograph outside. But really I was thinking of all those times this year when the forecast was for rain and, instead, the wedding day broke with sunshine. I was pretty sure the weather would be on her side but, of course, I didn’t want to say this out loud … just in case.

And true to 2009 form, December 5th dawned bright and blue with nary a rain (or snow) cloud in sight. But it was cold… quite cold… and as we toured Kim’s photo locations the bare-shouldered bridesmaids could have been forgiven for wanting to stay in the heated bus. But they were real troopers and, although the gentlemen were somewhat insulated in three layers of formal clothing, the ladies just braved the cold and smiled for the camera.

We DID have them wear coats until it was time to release the shutter and even did some shots with their coats on (well, that WAS reality, wasn’t it?). But there were a couple of occasions when we needed to call on their inner Zen and conjure up an image of sandy beaches and a hot sun just to get them to stop shivering long enough for the photo!

There WAS an up-side to all this: it was the first time that I’ve pulled into the Muny at Forest Park and not had to wade through other wedding parties to stake out our setting. Literally, there was NO ONE else there; we had the run of the entire complex. And the light was amazing — the nice golden evening light arrives much earlier in December than it does in July.

Eric and Kim also donned skates for a couple of laps of the Steinberg Skating Rink and definitely looked story-book romantic in their tuxedo and wedding dress amid all the other casual-clad skaters. One rink staff member was kind enough to by my body-guard (I prefer to think of him as my “camera-guard”) as I walked on the ice in regular shoes to take the photographs. And as good St. Louis skating fans, Eric and Kim also wanted photos taken in front of the Scottrade Center (now the Enterprise Center), home of the NHL St. Louis Blues.

A big thanks to Rhonda Jean who shot with me and showed me what backlighting with a Quantum flash was all about (see the photo at the top of this post — it’s hers!). Rhonda is expecting this spring and joined several of the bridesmaids (brides matrons?) in the “with-child-club” which made for an instant connection and lots of conversation throughout the day about baby things. As the father of at 24-year-old, I could throw in some baby stories but not the way Rhonda could.. Thanks Rhonda.

Eric and Kim have been exceedingly patient during these past few weeks, a very busy time of our year. I know they want a little peek at their pictures but they’re just too polite to bug me about it, so I’ll end this now and get it posted.

Thanks to both of you for allowing us to be at your wedding and please accept all our best wishes for a wonderful future.