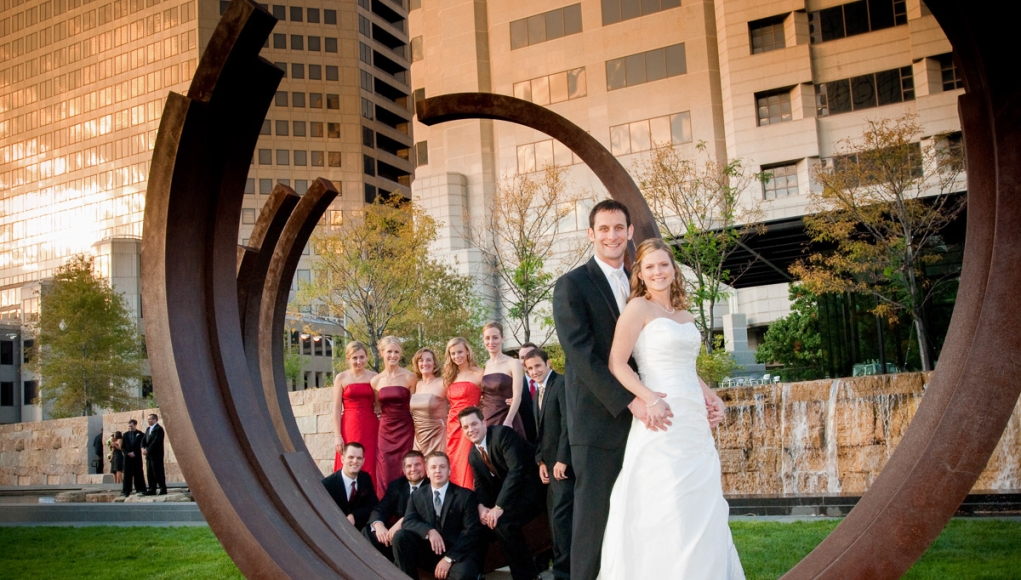 It’s amazing that in our first full year of operation here in St. Louis we’ve met so many amazing and fun couples. (And apparently some of them are SO amazing they’ve put Love and Life Photography over the top at The Knot to win the Best of Weddings 2010 award, but that’s the subject for another post!).

Bridget and Mike certainly add to our roster of amazing couples. Who else do you know that would run at full gallop through the dancing fountains at the CityGarden park, in their full wedding apparel (gown and tux) no less!

Their ceremony was at St. Paul’s Catholic Church in Fenton, with flowers supplied by Flowers by Renee. The church is a one-story contemporary design with predominant organic woods throughout the building and a beautiful high coffered-style ceiling.

As big St. Louis baseball fans, our pair had Busch Stadium booked as one place for the after-wedding photos. The weather was great and we had planned pictures in the dugout with caps and bats to go with the venue. Unfortunately, the Cardinals weren’t exactly “playing ball” with us. Their series with the Dodgers worked out so that they ended up playing a home-field game at the exact time we were supposed to be taking wedding pictures on the field… the audacity!

In any event, we started our shooting at Keenan Plaza, in downtown St. Louis. There is a small amphitheatre on the west side of the plaza and I wanted to use the waterfall in a shot. But an actual wedding ceremony was about to start there in 10 minutes so we had to work fast. Thankfully, Bridget and Mike were game for anything and we decided to only photograph the bride and groom instead of the entire wedding party to make it quicker.

The wedding organizers were a little concerned as we had Bridget and Mike step carefully from stone to stone in the midst of the waterfall. We signaled to each other (shouting instructions was impossible) to set up the shot, banged off a few quick pictures, and retreated quickly to another section of the park — officials were relieved (but we go the shot!).

We continued at the Arch park. One thing I had asked before the wedding is if I could ride with the couple in the limo/bus while we toured these sites. It was important because all these areas in downtown St. Louis are wedding-photo magnets and parking is very much at a premium. If the photographer is in a separate vehicle, then the wedding party might be waiting a long time while she/he finds a spot and parks and walks back to the site. If I am in the limo, then I arrive at the same time as the group and can start shooting right away. And these limo drivers know all the places to stop…

Tim, our second shooter, had been following the limo bus in his car. As predicted, there was no quick parking available for the arch park and he wasn’t able to join us at all. Riding with the couple is an almost absolute must for photographing downtown…

We ended up at the new CityGardens for our final shots and the now-infamous “fountain runs”!

Mike went first, racing through the dancing fountains and raising the winning hands at the end. Not to be outdone, Bridget and bridesmaid ran through the other way…

(By the way, you know you’re getting old when you suggest to the wedding party that we do an Abbey Road shot on the nearby crosswalk and everyone looks at you and asks with genuine puzzlement “What’s Abbey Road?” Mike had me believing for a minute that he was actually serious… agh!!)

We also had a great place to shoot at the reception venue at the Falls Reception Center in Columbia, IL. If you’ve never seen it, they have a wonderful back lot with a waterfall, a nice patio and stonework, park benches, and even a small stream at the very back of the lot.

Bridget and Mike have had a great honeymoon in an exotic location and are waiting to see their gallery images, so I’ll leave this post and continue work! Thanks again to our couple for allowing us to be a part of their great day and best wishes for a wonderful life together!