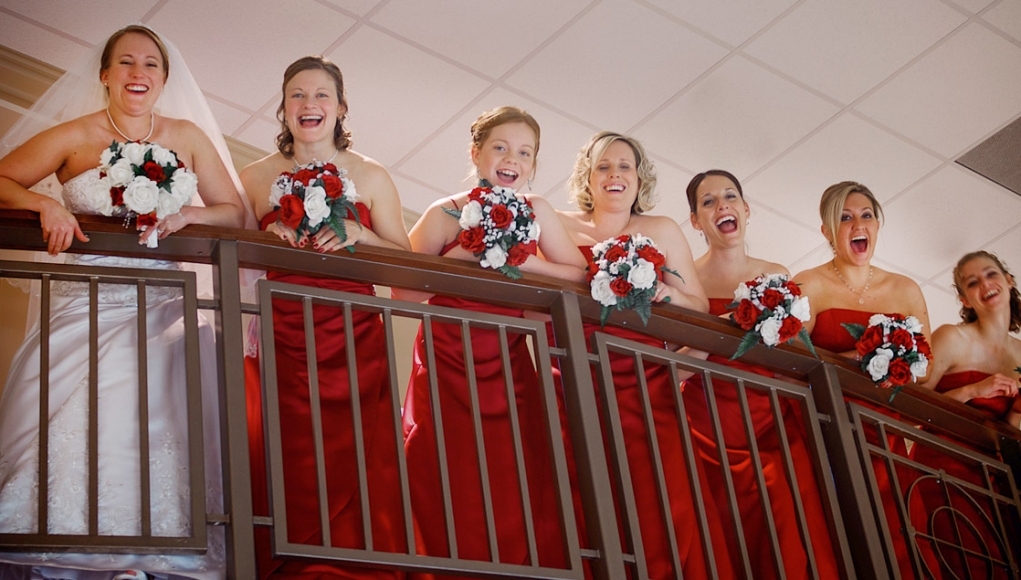 At Alycia and Mike’s rehearsal on Friday night, it became apparent that our young couple had not kissed much in public before and were a little bashful about the first-kiss part of the ceremony. So the pastor, who had been making everyone laugh throughout the proceedings, prescribed practice for the next 24 hours and asked the guests to score the kisses, olympic style, to make sure they were more confident for the actual ceremony!

Later that night at the rehearsal dinner, Alycia and Mike unveiled their presents for the bridal party: there were some very nice long-stemmed glassware for the reception and for guests to keep afterwards. But the group quickly thought of another use and their spoons began to clink the glasses immediately to help further the pastor’s prescription! Alycia and Mike quickly stepped up to the plate and scored the prescribed 9.5 from the Russian judge to put them in range for their successful nuptials the next day!

Both the ceremony and the reception were held at the Embassy Suites in St. Charles, and the buffet dinner was just excellent. The employees told me afterwards that this particular hotel has won awards for being the best Embassy Suites in the country.

The hotel itself has an attached conference center and well-manicured grounds with lots of opportunities for great photo settings. However, the conference center encouraged some improvisation when they announced that part of the building was closing just as we were wrapping up the group shots!

Alycia’s sister and brother-in-law told me they’d met at a now-defunct country bar in St. Louis a number of years ago, which was evident on the dance floor as there were lots of jive/swing/and country-line experts in the crowd. We got a lot of good, candid photos of great partying and celebration.

Congratulations to you both and thanks for allowing me to celebrate along with you. Here’s wishing you many, many happy years with wonderful memories of a great day.

(Left) The end of a fabulous day — Mike steals a kiss as they leave in the elevator.