Home Writing and publishing All orchid trails lead to Morrisville 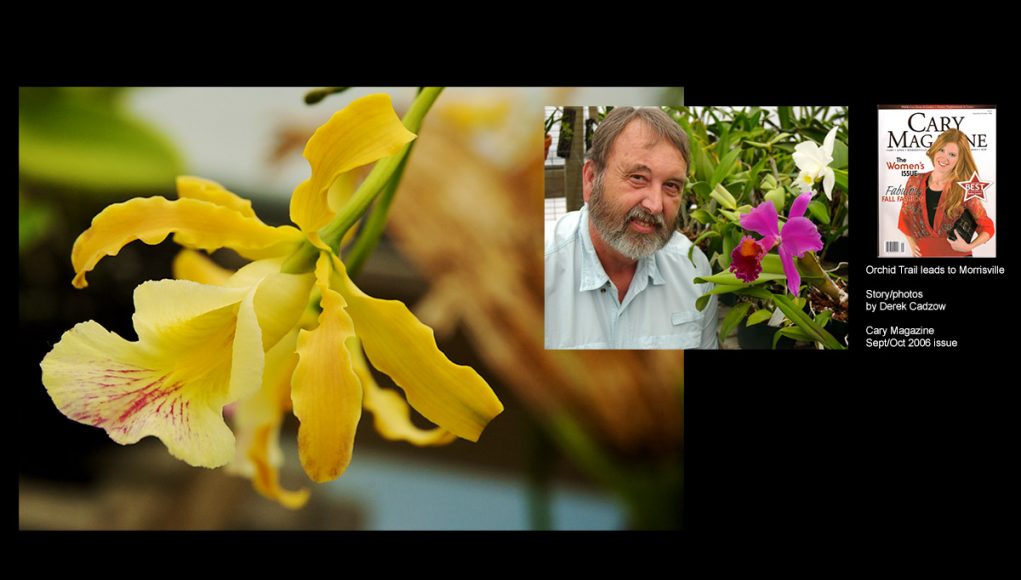 Story and photographs by Derek Cadzow. Printed in the September/October, 2006, issue of Cary Magazine. Reprinted here with permission.

Rows of beautiful orchid flowers dot a sea of green vegetation, some large, some small, some with multiple blooms and some with only one — colorful and exotic.  You might be tempted to visualize the deepest jungles of Africa for such a scene but, in fact, this spectacular view exists much closer — at The Orchid Trail in Morrisville.

Owner John Stanton has 30 years of experience with orchids.  He says that they come from all over the globe as well as from the world’s deepest tropical jungles.  And, strangely enough, they are well suited for the outdoors of summertime right here in North Carolina.

“The hardest thing to do is to convince people that orchids do well in the North Carolina summer climate,” said Stanton.  “Some people keep them outside in the summer and inside in the winter.”

Stanton earned his degree in agriculture at N.C. State University, but there was only a mere mention of orchids in the curriculum.  So, while working at a wholesale nursery, he started “messing” with them for fun.

“The the fun work started gaining on me,” he said with a smile.  He started selling orchids wholesale and ended up with a greenhouse full of them, and then two…

His flowering business supports casual orchid lovers and collectors alike with a wide variety of different species and hybrids, and his growing and hybridizing skills have won him numerous awards from local and national orchid organizations, including one for a variety he bred himself (Phaius amabilis).

“The casual orchid lover will buy plants to decorate their home’s interior,” he said.  “Many of those people keep their plants at The Orchid Trail and allow us to care for them until they’re ready to bloom.  They they’ll take the flowering orchid home to enhance the beauty of their house.”

Collectors, on the other hand, generally look for rarer or more exotic varieties and are serious about tending the plants for themselves.  Some of these enthusiasts have as few as a dozen plants, while the most prolific can have more than 400 in Stanton’s greenhouses.

These folks have their work cut out for them.  They can’t just order orchid seeds and start growing their own plants.  Seeds (or more specifically, seed pods) have to be propagated fro existing plants and sent to a laboratory for germination and growth till they’re one-year-old baby plants.  Then the grower/collector will have to wait another three to four years for the first flowers to appear and two more years for the plant to mature.

“You can’t be in a hurry with orchids,” said Stanton.  “It takes lots of patience.”

The relative popularity of orchids is a recent thing.  In the ‘50s, they were mainly used as the “corsage flower” — the one that, back then, a boy might buy for his date on special occasions.  “The novelty was their rarity,” said Stanton.

That changed in the ‘60s when people discovered an orchid’s longevity (as long as 60 years) and started buying plants instead of just the flower.

With this new popularity came the inevitable mass production.  Today, orchids are often grown in great quantities in Taiwan and to a lesser extent in South America.  But, contrary to what you might think, Stanton said that farm-raised orchids are a good thing.

“Nursery plants do better than plants collected from the jungle.  Those in the jungle have a symbiotic relationship with other plants, which can’t be replicated in the nursery,” he said.  “Moreover, it is a good thing not to take wild orchids from their natural habitat because it’s just not the thing to do. In the past, so many were taken that some orchids are actually considered endangered species.”

Nowadays, wild orchids are protected by international and national legislation.

For those who’d rather buy than grow, there are two general choices: those that are ter- restrial (grow in the ground) and those that use other structures for physical support (epiphytes grow on other plants, mostly trees, and litho- phytes grow naturally on rocks or rocky soil).

For a first-time buyer, Stanton suggests a Phalaenopsis, which likes the same tem- perature as people do, or Dendrobiums, because they are rugged.

The Orchid Trail provides advice on growing and fertilizing all kinds of orchids, what kind of light is best and how to avoid pests. “Generally, orchids are not heavy feeders and don’t require a lot of care, so they can easily be given too much water or fertilizer,” he said.

If you’d like to know more, you can contact The Orchid Trail or attend gatherings of the local Triangle Orchid Society, which meets at Duke Gardens on the second Monday of each month. They have big show tables, people who can tell you about the orchids on show, and guest speakers. The group tends to target its information more to beginners, so the information is useful to a broad audience.