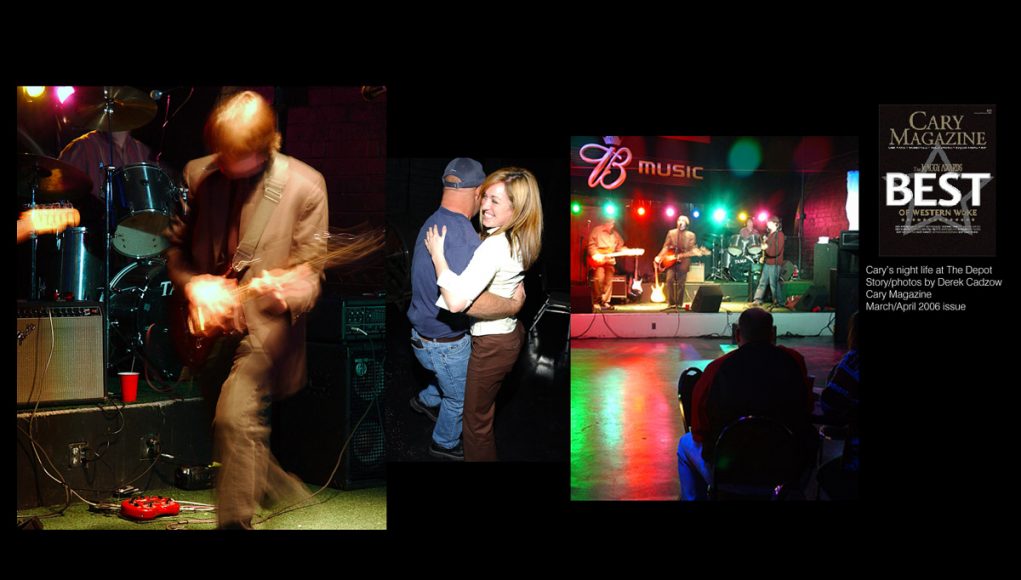 Story by Derek Cadzow; photographs by Derek Cadzow and Renée Cadzow. Printed in the March/April, 2006, issue of Cary Magazine. Reprinted here with permission.

“I didn’t even know there was a nightclub in Cary!”

Cary entrepreneurs Frank Lazzaro and Frank Stoltman wish they had a nickel for every time they’ve heard that phrase.

But it IS true that, even though there are many fine restaurants, sports bars, and shopping opportunities in Cary, there have been few consumer choices for night-time entertainment — places to let loose, kick back with friends, dance the night away to top-line live music, and just plain enjoy yourself.

Lazzaro and Stoltman are changing that with Cary’s only nightclub:  The Depot.

“It’s something new for Cary,” says Stoltman.  “People are not used to the idea of a night club and night entertainment in Cary.  They tend to think of downtown Raleigh as he only place to go because, until The Depot, there was no night club or dancing here locally.”

So Stoltman and his partners built The Depot based on everything they would want in a nightclub.  “We want people to have an intimate, down-home local place to come and see great band performances, and enjoy games and great dancing – basically let their hair down and have a fun with old-time night entertainment.”

Recently, The Depot has offered such well-known bands as the Embers and soon will present Kashmir, a Led Zeppelin tribute band.  They also have presented regional and local bands, including Naked Bacon, Liquid Pop, Bubbling for Melons, Penny Shaker, and Al Williams.  Some bands, like Should be Sushi, have used The Depot for their CD release parties.

“The difference here is that a band can put on a great performance,” says Stoltman.  “We have a raised stage, good lighting and performance stage lights – bands have the facilities to offer a spectacular show.”

The Depot will go to extraordinary lengths to ensure patrons have a good time.  Recently, they trucked in enough sand to cover the club’s floor with 9 inches of the stuff and partied for two weeks with beach music and even beach volleyball inside the club!  Says Stoltman: “We like to do special events from time to time, but that was certainly an extra-special one.”

Can’t dance yet?  No problem.  The club offers shag and swing dance lessons on Thursday nights.   Swing dancing is currently experiencing quite a revival amongst young people in the state – there are even swing dance clubs offering lessons at the state’s universities these days.  Recently a four-day swing dance convention spent two days at The Depot and brought people from all over the US, Canada, and Australia.

The Depot has also been doing a booming business in “Texas hold’em” poker tournaments, attracting between 40 and 50 people for each of the two sittings on Wednesday poker nights.  Playing on pro-level felt tables and using the proper clay poker chips, contestants participate in a 10-week tournament for an end-of-season prize: a trip for two to Las Vegas.   The Depot’s poker games are more social than serious  – in fact; some players have actually started dating as a result of meeting at the poker table.

The club also gives back to the community by hosting special fund-raising charitable events, including a Toys-for-Tots event at Christmas, being a stop for cyclists on the Cycle for Multiple Sclerosis (MS) bike tour, and another event to benefit the Cary performing arts.

Lazzaro and Stoltman own and run The Depot along with another group of investors.  “We are primarily interested in ensuring our patrons have a great time at the club, and in working with other businesses in Cary to really promote and build up the city’s downtown.”

The Depot has been open for about a year.   Stoltman, a veteran of the Chicago bar business as well as TV and radio here in Raleigh, sold his former marketing business to open a teen club, called Club 56.  But once sororities and weddings came knocking at his door, he needed to get a liquor license and Club 56 was transformed into The Depot.  Lazzaro, an owner of a building supply business for 30 years, and Stoltman met shortly afterwards and they became partners in the venture.

The club’s clientele, mostly white collar couples and singles who are looking for the big-city nightlife in downtown Cary, pay a two-dollar membership fee (state law) and can bring guests for an admission of one dollar.  Of course, people have to be a minimum of 21 years of age to get in.

“We’re passionate about building this business because we’re promotion oriented and we love to help everyone have a good time”, says Stoltman.  “Cary people are great and we’d like to see the downtown of their city flourish with opportunity.”