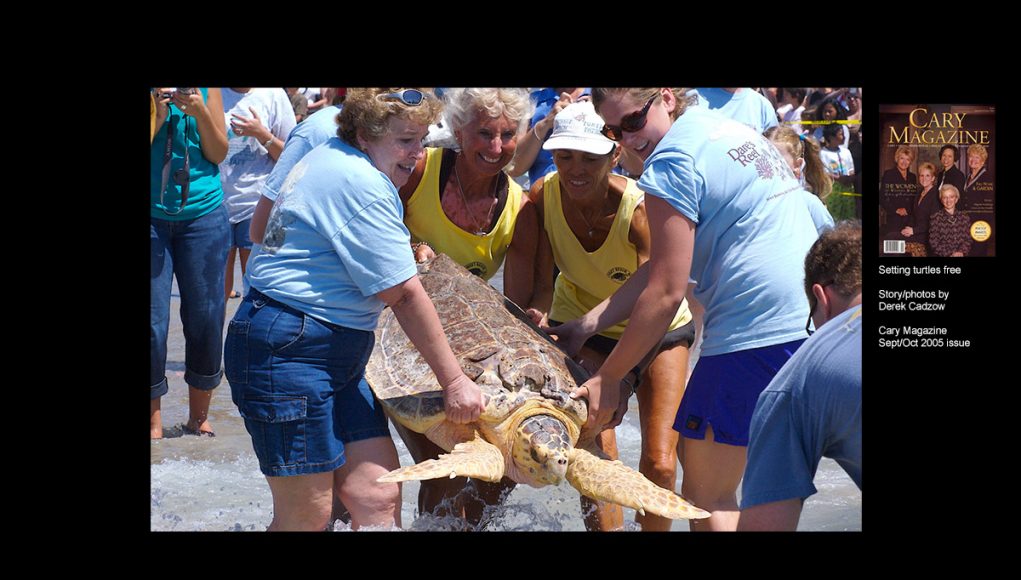 Story and photographs by Derek Cadzow. Printed in the September/October, 2005, issue of Cary Magazine. Reprinted here with permission.

What is it about sea turtles that compel hundreds of people, young and old, to line the beaches to watch 13 of them returned to the wild?

Perhaps it is some form of empathy with the excitement these creatures show as they realize the ocean is at hand for the first time in many months.   Or, perhaps, it is something bigger than us – that in some simple way, we are watching and helping a still-enigmatic nature survive in the wake of human development.   Or, perhaps, we are drawn to what may be a last lingering view of a vanishing natural wonder.

For whatever reason, hundreds of people waited for hours on June 8 at Topsail Island beaches to watch 13 sea turtles, some as large as 350 pounds, released back into their ocean home.   Many of these turtles, treated for months or even years at Topsail’s Karen Beasley Sea Turtle Rescue and Rehabilitation Center, have survived drastic injuries including ingestion of fishing nets, propeller injuries, disease, and emaciation.  The center has rehabilitated and released almost 150 sea turtles since it’s inception in 1996.

Among the small army of devoted volunteers is 19-year-old Jane Allen of Cary, who works as an intern under the direction of Hospital director Jean Beasley and is helping Swan, an 8-year-old loggerhead sea turtle, prepare for her release.

Two years ago, Swan was found near Swansboro, NC, with wounds to her back and head that were likely inflicted by a boat’s propeller.  She was almost half her healthy weight, covered in barnacles, and near death.  “You could feel the bones in her flipper, which is normally a very fleshy limb” Jane said. Now, Swan is fully recovered and is ready to be released back to her ocean home.

Jane’s interest in sea turtles goes back to her summer days in Cary when, as a youngster, she’d take in little turtles found near her home.  Later, on a trip to the Caribbean island of Bequia, she visited a sea turtle hatchery where new hatchlings are gathered and nurtured till they are old enough to survive on their own in the ocean.  Her affinity to turtles and the environment was assured.

To become a hospital intern, Jane competed with 70 other young hopefuls for only seven available positions.   “I was very excited when I heard I’d been accepted, and turned down another job just to be able to come here,” she said.

She underscores why she thinks this work is so important: “Only 1 in every 1000 turtle hatchlings live beyond one year, and only 1-in-10,000 makes it to reproductive age — so every turtle we can save is important to the survival of the species.  Many that come to the hospital are close to death and wouldn’t make it if we didn’t help them.  Our turtles will be the 1-in-10,000 that will make it and help keep the population up.”

In addition, Jane says that sea turtles are an ‘indicator species’, meaning that their decline shows that the marine environment is getting worse for all other species too.  “It’s not a clean ocean any more,” she says.

An intern’s day starts early.  Jane and the other interns walk the beaches around Topsail each morning to see if any new nests have been built during the night.  If one is found, they will notify the Topsail Turtle Project and NC Wildlife to protect or relocate the nest.

Then they’re at the hospital by 8 am to cut up fish and squid to feed the turtles.   “They can get pretty dirty”, Jane says.  “We need to keep them clean.”  Scooping the tanks of waste and food is not anyone’s favorite job, but they also assist in the overall care of the animals.

“Each turtle has a very different personality,” she says.  “Sometimes they fall asleep in your arms when you’re treating them.  You get attached to them very quickly.”

So, even after only two weeks of work with Swan, Jane is both sad and happy as she and her teammates carry the 100-pound turtle into the surf.  You can see Swan’s excitement as she realizes where she is.   It takes only a moment to place her in the water and point her in the right direction.  Swan swims quickly away and in a moment she’s gone.

“She was really good about going straight out to the ocean, says Jane. “They’re not used to having that many people around and there were many enthusiastic people in the crowd.  It’s hard to see them go but exciting at the same time because they will survive and it’s proper that they live in the wild.”

But Jane won’t have much time to miss Swan.  Since the release, nine new turtles have been brought to the hospital.

“One new charge I have is Quarter.  He got that name because he has two quarter-sized holes in the flesh behind his flipper.  He was probably caught in fishing nets and often fisherman will stick them with a gaff hook instead of trying to deal with a frightened, snappy turtle.  We’ll treat the wounds, disinfect them, and use Silvadene, which was developed for human burn patients, to help heal and close the hole.  So far, he’s doing really well and the vets will decide when to release him — maybe next summer.”

Jane says interacting with the 200-300 people who tour the hospital every day has been good.   Although she finds the tours draining, they help Jane feel she’s making a difference when she sees the reaction of people who are really interested.  So far, the experience has moved her from simply studying the environment to interacting with it.  “I’ve seen up close what is actually happening”.

Meanwhile the hospital is embarking on a major expansion.  This winter, they’ll be breaking ground for a new, larger hospital on 5 acres of land donated by the Sullivan family of Surf City.   It will require more donations to complete the project, but Jane says that when the new facility is complete, they will be able to treat a lot more helpless turtles and make an even bigger difference.