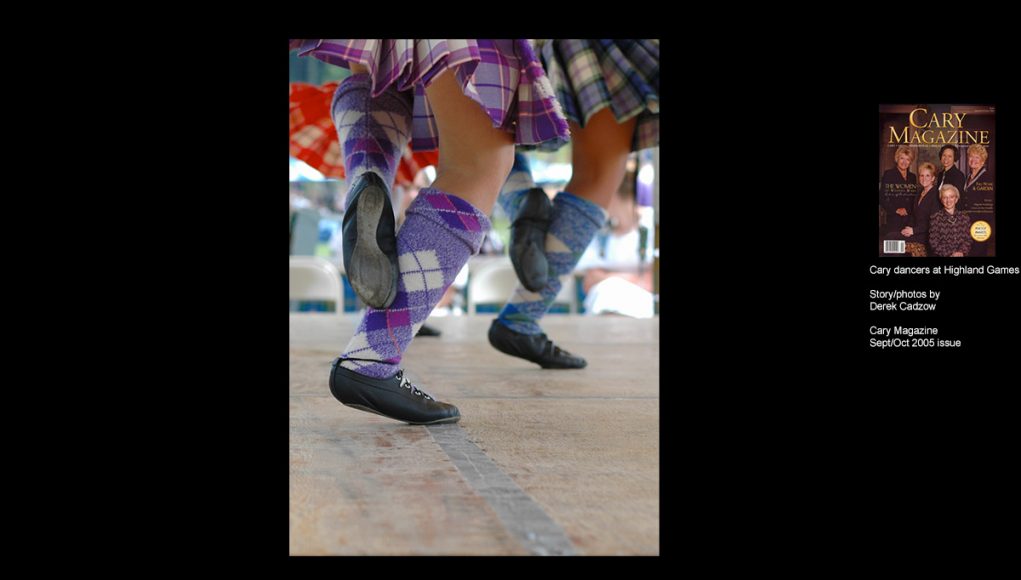 Surrounded by the green majesty of Grandfather mountain on a blue North Carolina summer’s day, young Susan Tapp waits, poised and prepared, for the right note on which to begin an age-old traditional Scottish dance:  the Highland Fling.

The judges watch carefully, but Susan is ready. She’s been a student of Scottish dance at Cary’s School of Scottish Dance since she was six years old and has many successful competitions, from North Carolina to Scotland, behind her.

Story and photographs by Derek Cadzow. Printed in the September/October, 2005, issue of Cary Magazine. Reprinted here with permission.

But two long years ago, Susan tore a ligament in her upper foot, and it’s been a hard struggle ever since.  Now, Susan is 16 and her doctor has finally cleared her to dance at the Grandfather Mountain Highland Games – the biggest Scottish event in the USA.

“I was really hoping I’d do well”, she said.

She’s not dancing alone — the Cary school has 14 students entered in this year’s competition, ranging in age from 4 to 24.  Under the direction of school director, Jo Kalat, the Cary competitors have prepared for a variety of traditional dances: the Highland Fling, the sword dance, seann triubhas, the hornpipe (a special performance to celebrate 50 years of highland games), a jig, the village maid, the barracks Johnny, and a reel.

It’s a punishing program and contestants have to endure sore muscles, heat, and exhaustion to turn in a good performance.  So why do these dancers do it?

“I dance because it’s different; it’s not something that everyone else does,” says Susan’s fellow dancer, Megan McElroy, also from Cary.

Jo Kalat concurs. “Part of the attraction is that it is unique.  Most students get started because they know someone who does it, they have a Scottish background, or they’ve seen it somewhere else and like it.   It’s a lot of work to get everything just right, but the rewards are tremendous and most dancers build a wonderful community of friends across the country”

As well as the physical hurdles, dancers must try to concentrate in the middle of a noisy field that is active with distracting highland events and music.  While lithe dancers measure their steps on the covered stage, swarthy men around them are tossing cabers (a kind of small telephone pole), throwing hammers, running races, playing bagpipes in competitions and in marching bands, while 20,000 spectators mill around the grounds trying to take it all in.

As the music starts, Susan and her two fellow competitors on the stage begin the fling. Her red-tartan kilt swings with the motion of her jumps, steps, and swirls.  A few short minutes later it is over and Susan, breathless, bows low for the judges.

Says teacher Kalat: “Susan has the greatest spirit.  Even when she was hurt, she would still participate in stretches and would go to class and competitions to support the other dancers.  Susan is the kind of role model that you would want your own kids to grow up around.”

Later, the competitors line up to hear the results and Susan is surprised and happy to hear she has taken fourth overall for her Hornpipe, has won her class (16-17 year olds), secured the dancer of the day, and has been named the best senior Carolina dancer of the event.

The other Cary dancers fare well too.  Katie McDaniel took second runner up, Rachel McPherson achieved third runner up, and Sandra Kennedy secures first runner up in the over-18-year-old class.

Not all students compete, says Kalat, but those who do find it gives them the motivation and discipline to learn the structure and to develop the muscles and movements needed to dance well.  “Competition motivates you to do that,” she says.