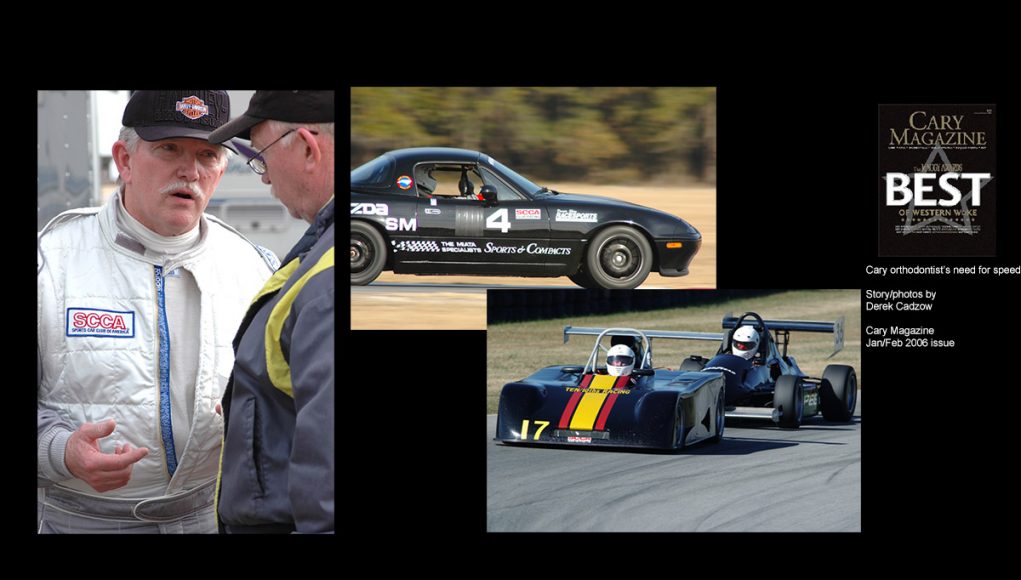 Story and photographs by Derek Cadzow. Printed in the March/April, 2006, issue of Cary Magazine. Reprinted here with permission.

On a sunny Sunday afternoon, a group of Mazda Miatas, Porsches, older MGs leisurely drive down the road in formation, when all at once the starter’s flag snaps and 30-odd engines roar to life in one ear-blasting crescendo turning this tranquil afternoon into a mad free-for-all.

Thirty adrenalin-pumped drivers seek the same spot in the first corner and the inevitable happens: one white Miata slides helplessly out of line and onto the grass showering hapless drivers with a rooster-tail of dirt and rocks.

But by the next corner, the cars even out into one sinuous snake-like line, slithering and sliding around the thin strip of asphalt — each driver seeking advantage from the one in front and carefully protecting his flank. Smack in the middle of this snarling beast is Cary orthodontist Bill Gurley.

At 61, he’s back in a racing car after a 12-year hiatus. Today, he is at Savannah’s Roebling Raceway demonstrating his race savvy to marshals in an attempt to regain his Sports Car Club of America (SCCA) racing license. Success will allow him to enter races for the rest of the season. Failure means… well, for Bill, failure is not an option.

One could say that Bill Gurley is a driven man — driven, that is, to get all he can out of life. Even at the tender age of 18, he had a two-page list of things he wanted to accomplish in his life. So far, he’s doing pretty well.

In addition to a very successful and enduring orthodontic business in Cary, Bill has traveled Europe with friends several times on motorcycles, flown in P-51 Mustang aerobatic planes, and jumped out of an airplane at 16,000 feet over the north pole with an international team of 120 parachutists from the US, Russia, and various other countries.

“I trained for six months. We jumped into 200 mile-an-hour winds and minus-75 degree temperatures. It wasn’t necessarily a difficult jump, but the environment was difficult.”

Bill says he has always wanted “texture” in his life. Like the proverbial Renaissance man, he has done equally well as a businessman, adventurer, traveler, and even a poet. “I’ve always wanted to be able to appreciate Pavarotti on one hand and run with the Harley guys on the other hand.”

Returning to car racing was partially a move of self-preservation. After 20 years of motorcycling, Bill decided that he needed to “wrap himself in steel” instead. He also began to think about the effect of parachute landings on his aging knees.

But it was also a way to hold onto the thrill of the adventure. Bill says: “With skydiving, you might get six jumps in on a good day. That’s 90 seconds of freefall, plus the canopy time, and then it’s all over. In a race car, driving time lasts a lot longer.”

Bill doesn’t worry much about the danger of racing saying: “I’m safer driving in a racing car than I am in my road car driving to the race track.”

He’s more concerned about being successful on the track. The same organizational and people skills that made his orthodontic practice so successful also contribute to his racing successes. “There’s a lot of preparation that goes into these machines and in racing, as in business, good preparation is the key,” he says. “We are committed to doing the best job we can in each circumstance — and we get the results we are looking for.”

On this April day, Bill easily has the legs of his younger rivals. Helped by Raleigh’s Sports and Compacts owner and race-car builder Carl Cason, his black Miata is fast in the lapping sessions and the instructors watch his progress closely. The irony of this day is that he will have to go slow to finish the test; his tires have worn excessively and his crew warns him the tire’s steel belts are showing through the remaining rubber. Although it is against his nature to hold back, with Carl’s encouragement, he does the unthinkable – drives SLOW and preserves his ride to finish the session and get his license.

Now, fast-forward to late October and Bill is at Virginia International Raceway with the end of the first season of his second racing career in sight. He’s racing a D-Sports racer: a small 940-pound, 180-horsepower racing machine that generates 2.5 lateral Gs (the centrifugal force that will make Bill 2.5 times his usual body weight as he goes around the corner).

Bill is up against several classes of cars in this race and doesn’t disappoint spectators as he cuts and carves past several cars, supposedly faster than his, and then keeps it on the ragged edge to stay in front. Bill wins his class and finishes fifth overall.

Enough to keep the adrenalin and the thrill going, and not bad for a “senior”!