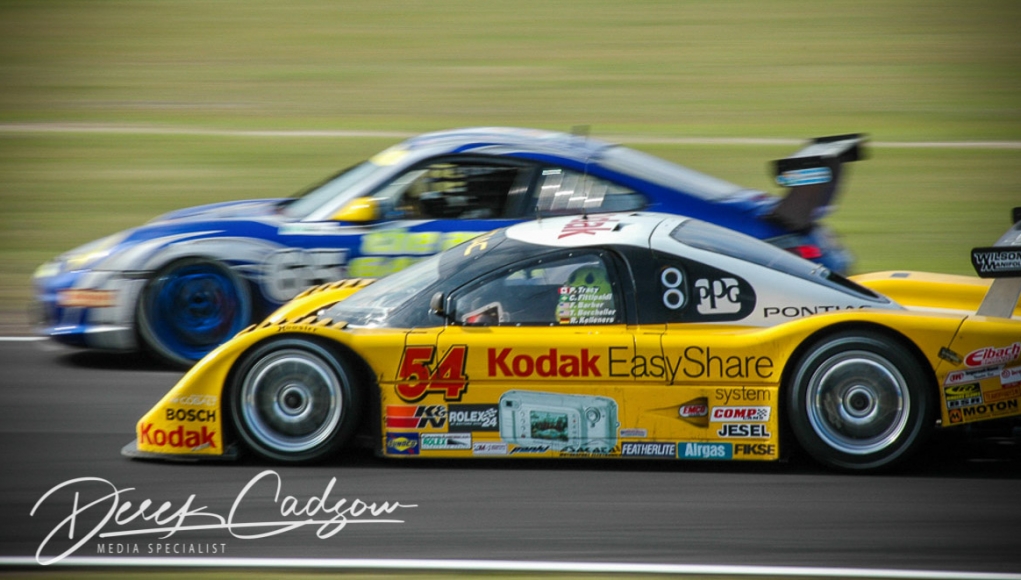 It’s Monday and I could only get going very slowly this morning. What was holding me back? — a bit of a headache from lack of sleep and sore aching leg muscles from walking what must have been miles and miles around Daytona. But if that was the only price for a fantastic weekend, I’ll take it!

This past weekend at Daytona International Speedway for the 24 Hours of Daytona was something I’d thought about for years.It’s a race I’ve been reading about since I was a teenager but had never seen. Although I’ve driven past the track before, I’d never actually been there. It’s an amazing facility. The track is huge yet almost all visible from the grandstands. There are REAL toilets and even showers there for spectators — something that was unheard of when David and I used to go to the Grands Prix in 1970s Canada.

The track is about 550 miles from my home. My plan was to leave Friday at midnight and drive through the morning, and arrive at 9 or 10 on Saturday morning. It pretty much went according to plan, except that I had to stop in Georgia for an hour’s sleep. But I still got there at about 10:15, which was pretty close to my plan. I had been a bit worried about my 13-year old Miata making the journey all right, but it was fine. Once I was motoring through South Carolina in the dark, I was more worried about the dark shapes I could see in my peripheral vision — deer feeding near the side of the road that could have bounded in front of any car without warning!

My ticket entitled me to an infield parking spot. Since the race is 24 hours long, the Miata was my base of operations including my place to sleep on Saturday night. Let me just say that, although I love my little car, it has NOTHING on a proper bed with a mattress! Next time there will be at least a tent with me…

Once I found a parking spot, I took to figuring out the layout of the track and finding out where the best spots were to take photographs. My ticket allowed me into the garage area, and even out onto the pit lane till just before the start of the race — all great opportunities for photographs. Soon they called for people to leave the pits so they could get underway and a number of us crossed the track to climb up to the grandstands for the start. The banking on the track is unbelievable. If you stand on the slope and happen to look up, it’s easy to lose your balance!

Each car has a team of two or three drivers. There are two classes of car: sports prototypes (the more exotic looking ones) and more traditional, but high-powered road cars (your more common Ferraris, Porsches, and even on Mazda RX8). Lot’s of fairly well-known drivers were entered including Paul Tracy, Christian Fittipaldi, Tony Stewart, and a host of others from NASCAR, the Indy League, CART, and European drivers.

Surprise, surprise — they couldn’t clear the pits of people quickly enough, so the race started a little late! I spent the next few hours walking here and there taking pics. I soon discovered there was a trolley system to take people from one part of the track to another. At first it was difficult to get good photos because your access to the track is quite limited.

Later, as I got more familiar with the track layout, I found some quite good places to photograph from, just by looking for other photographers! Of course, the pro photographers were on the other side of the fence where us lowly spectators could not go. And the equipment they had brought on a strange feeling of male inadequacy — their lenses were MUCH bigger than mine and surely they could get better results than with my puny little lens! But, I soon realized that my little digital camera and my 300mm zoom and 500mm fixed lens got me quite close to the cars at many points, and I wondered exactly what they were doing with all their high-powered and very expensive equipment…

Dinnertime arrived and I ate a mixture of food I brought and some of the vendors’ foods. Then I slept for a while in the Miata so I could spend some time photographing later in the evening.

While out shooting in the dark from one of the grandstands, I met a man who claimed to be there with Paul Tracy’s cousin. He pointed to the man in a pickup with a PC hooked into the telemetry from a race car, and I have no reason to doubt that all this was true. He had me take a few pictures of Paul’s Kodak car and I gave him my web site address so he could go there and see them later this week. So we’ll see what happens! (Nothing did…) Even well into the night, the track really wasn’t really that dark. NASCAR sometimes races at night and their system of lights really brightens the place up.

It was frickin’ chilly all day Saturday — even though the sky was blue and clear, the wind was biting and jackets, gloves, and hats were everywhere.

By the time I went back to the Miata to sleep for the night, my legs were getting quite stiff and sore! Although I did sleep with few interruptions, I will say that the Miata is not the most comfortable car to rest in. However it worked this time to keep expenses down and stay at the track overnight.

In the morning, it took me a while to get going, but I found that the field of cars had got quite a bit smaller over the course of the night. Even Paul Tracy’s car had disappeared back to the garage area and the team had packed up and gone home. I spent some time taking more pictures and then took the trolley back to the grandstand opposite the pits to watch the end of the race. Besides my feet and legs were getting stiff and sore enough that I’d had enough walking around. And it had warmed up nicely and what better way to enjoy the sun than in the grandstand watching the rest of the race. Of course, I never thought that I didn’t have any sun tan lotion on… 🙂

There was lots of action to be seen yet however. One car came into the pits and caught on fire as the driver slowed to pit lane speed. He used his head and drove it onto the grass away from the fuel stored in the pit area and then promptly exited the car! The fire crews had the fire out within seconds, but it was a scary moment.

The race was actually over BEFORE the flag fell. The lead car was ahead by a number of laps and they reached the point where, even if it had broken down, there would not have been enough time for others to catch up. During their last pit stop you could see them celebrating already.

I spent some time at the track after the race was over. I visited the pits again to see some people cleaning up and others lamenting over damaged and badly broken race cars. I left the track at 1:45 to try and beat the traffic through Jacksonville (Super Bowl city this year). It was surprisingly easy — I thought I’d be caught in a traffic jam, but the roads were clear and I got through in record time. However, on the other side of the road I saw a series of stretch black limos escorted by police motorcycles with their lights on. I’d like to think that must have been Paul McCartney headed to the “Bowl” for his half time show!! How cool is that?

I got home much earlier (about 11:30 pm) than planned, in spite of sleeping another hour at a rest stop in South Carolina. Of course, I had to check out all my photos as soon as I got home. There were 532 of them! Likely about half of those will go in the trash as not being what I want or being not sharp enough, but there are some good ones there too that should be posted on the web site by the end of this week.

Next week I’m off to Savannah, Georgia, where the owner of the local Miata garage has a car in an SCCA club racing school and I’ll be going to meet him there and hopefully have a much better access to the pits and track. This is fun!

I really feel great today. This is something I should have done a long time ago, and will plan to do again soon. The only thing I would do differently is take a bigger car because over the long distance my legs (right one especially) tends to get cramps after about 2-3 hours of driving.