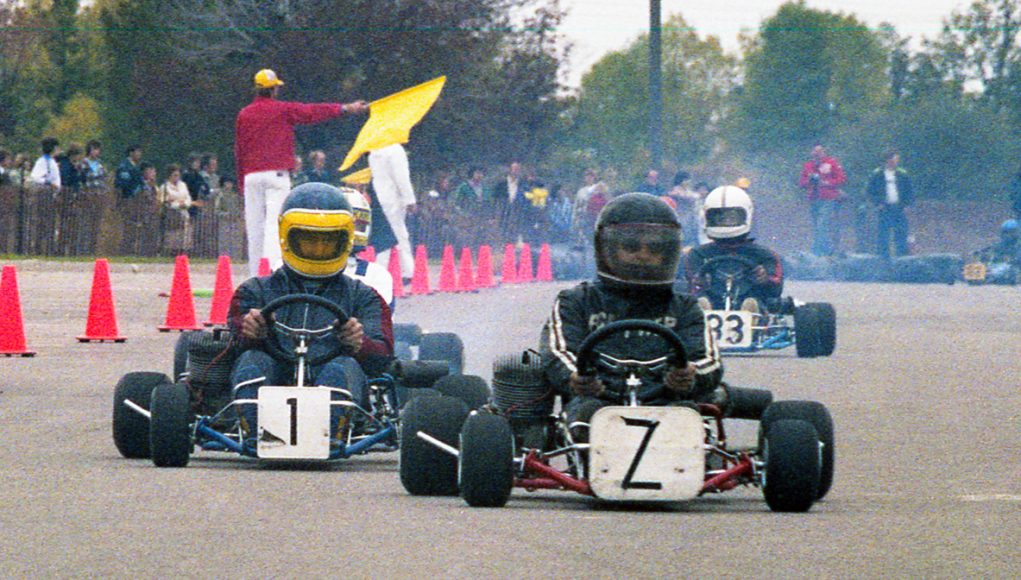 These are the stories of the first Canadian Pro karting series that toured several tracks in Ontario and one in Quebec in 1978. Even though I didn’t race much that year, I was involved with the organization of the series and got an inside look at the inaugural season. (Prints or hi-res digital copies of photographs are available in these client galleries.)

(Between the Picton round of the series and this race at Square One, there had been one other event at Goodwood. I didn’t attend that event and I have no details or pictures of it.)

The name “Square One” was even more of an enigma to me — I was actually there before I realized that it was a very large shopping centre and that the track was laid out in the parking lot with pylons and old car tires.

This event was the finale of the five-race Canadian Pro Series and was part of the Mississauga festival and sanctioned by the Canadian Karting Federation. Since it was being held in such a public place, we hoped the race would attract a horde of spectators to see and learn about kart racing.

As a community, we were gaining experience with these kinds of public races.  In Ottawa, we’d had a very successful race at the Museum of Science and Technology in 1977.  In another 18 months this race would inspire another landmark karting event at the Nepean Sportsplex near Ottawa.  They produced exciting racing and the exposure to the public-at-large had been invaluable.

Adding to the excitement at Square One, drivers would be battling for the National- and International-class championships, both of which would be decided here today.

The paddock was a frantic, crowded amazing mess. Drivers, teams, and equipment were strewn everywhere and just added to the overall atmosphere and excitement.

Fabrizio Patuelli, winner of the first International-class round at Goodwood, was here to continue his quest for the title. His main competition would be from series regulars Paul Mason, Bill Packham, Mario Petti, Wrex Roth and OKRA regular Colm O’Higgens.

And although he wasn’t a regular and couldn’t mathematically win the championship, Toronto’s own Scott Goodyear had entered (yes, the same Scott Goodyear that 10 years later would be an Indycar star). Goodyear had been missing from karting circles all year prefering to race Mini-champ cars instead.

Previous race winners Matt Haney (Goodwood) and Tony Serravelle (Picton) were here to fight for the National-class crown.  National regulars Randy Packham and TJ Dersch were also entered. But surprisingly Quyon race winner Jon Snadden had retired from the series and from racing. Picton winner Richard Fugère had not made the trip from Montreal either.

Due to the limited time available for this race since it was in a public place, only two heats were being run for each class.

In the National race Randy Packham was on pole with Matt Haney beside him in the second starting spot.

Charging into the chicane before the first corner, Haney and Packham tangled and spun off the course. Packham restarted almost immeidately and tore off after the pack. Haney had trouble starting his machine again and didn’t get going until nearly a lap later.

Now Mike McCann of Toronto and John Saunders of London joined in a three-way battle for first place with John Thompson, the only regular Pro driver in the trio.

T.J. Dersch in his Mason Racing Engines (MRE) Deavinson was moving up quickly from his low grid position. Soon he was on the tail of the leading bunch and on lap four moved inside Thompson going into the chicane. Thompson gave way and Dersch set his sights on Saunders in second and McCann in first.

Next lap, Dersch moved inside of Saunders and McCann approaching the chicane. But McCann and Saunders weren’t having any of it — they stuck to their line giving Dersch a healthy bump in the side.

Both McCann and Dersch sailed into hay bales.  Dersch got the worst of it, flipping over and falling out of his still-running kart. The kart bumped into Dersch, now lying on the ground, and pushed him about 20 feet before the engine died.

The ambulance was called out and the race was immediately stopped as the vehicle takes up most of the width of the track.  Dersch was pronounced fit after a brief examination, and officials decided on a single-file restart in the same order as the last lap before the accident.

TJ’s kart flipped over after a collision and he fell out of his still-running kart. The kart bumped into Dersch, now lying on the ground, and pushed him about 20 feet before the engine died. He got back in the kart right after this picture was taken and finished second.

One pace-lap later they were off again. Dersch immediately made another move on McCann in the same place but this time got by safely. Out in front now, Dersch increased his lead by half a second a lap.

Randy Packham was the next up to challenge Saunders and McCann.  Tight on Saunders’ tail, Packham made his move on the straight and now was sandwiched between the two of them.

Packham had a “moment” around the back of the course when McCann appeared to brake at the wrong time and Saunders bumped Packham’s rear bumper. Packham’s front end went up in the air but fortunately came down safely. Unshaken, Packham went by McCann just a few corners later for second place.

Now Packham pulled out a lead on the pair and soon caught up to Dersch, but was unable to pass before the end of the race. Haney meanwhile, made it into the top four by the end.

Packham and Dersch started on the front row for the second heat, and when the flag dropped Haney tried unsuccessfully to squeeze through the middle.

Dersch and Packham watched each other like hawks as they dragged down the front straight. Packham squeezed Dersch out tor first and Haney slotted in behind them for third. This time everyone made it through the chicane with only a little bumping.

Packham and Dersch pulled away from the rest but Haney couldn’t keep up and started a slow fall through the field.

As they came up to lap Mike Matthews and Launi Arcanselo they were just reaching the now-infamous chicane. Matthews dutifully let the leaders by, but as Packham later said “Arcanselo tried to make a move on me,” something you don’t expect from a backmarker.

Packham jumped on the brakes to avoid Arcanselo, but Dersch was unprepared for this and hit Packham broadside. Matthews was next as he ploughed into Dersch, and the three of them went flying off the track.  Dersch’s kart flipped over (again) but he was unhurt.  Packham restarted almost immediately without losing his lead.  Dersch had trouble starting but did manage to get going again before Packham lapped him.  Matthews was the least fortunate as he was out for the rest of the race.

Arcanselo wasn’t even stopped by the incident, but his exhaust pipe was torn loose and officials inexplicably allowed him to continue with just the header left on the engine.

After all of this, Packham cruised home for the National class victory, but it was Haney who, despite finishing down the order, retained enough points to win the National Class Championship.

Patuelli and Euro-kart had a troubled practice & qualification, qualifying near the back. Afterwards, the whole team rushed to the paddock to try and put things right for the race.

Goodyear did a demonstration run in a 125cc gearbox kart, known locally as a “shifter” and then the actual racing got underway.

On the pole was series-regular Paul Mason in his MRE Deavinson kart with Scott Goodyear on the outside pole with his Margay kart/Komet engine . Mario Petti of Petti Racing Developments and Colm O’Higgens of Canadian Performance Products filled out the second row.

Scott Goodyear (#4) and Paul Mason (#2) fought side-by-side for several turns before Scott gained the upper hand and pulled ahead.

From the start, Goodyear and Mason tried to out-drag each other into the first corner and fought side by side for the first few turns,

But at the end of the first lap it was Goodyear pulling away with Mason second, John Drake third, and another Montrealer, Gavin Sharbel, fourth. Patuelli was already slicing his way through from the back of the pack.

Mason had a quick spin and broke his seat mount and began to drop back. Drake passed him for second, then Sharbel for third, and Patuelli for fourth before the end of the heat.

In the second heat Goodyear and Drake started on the front row, and this time Goodyear was off to an immediate lead from Drake. Goodyear quickly built up an amazing lead and seemed to be out of anyone’s reach.

Meanwhile Patuelli was taking up where he left off in the last heat. Both Ray Gaggi and Gavin Sharbel succumbed to the hard-charging Patuelli giving him third. A few laps later and he had caught and passed Drake for second place.

Goodyear, by this time, enjoyed a tremendous lead of almost 30 seconds over Patuelli. The Euro-kart driver could not hope to climb higher unless Goodyear’s machine broke in the next few laps. Behind Patuelli, Gaggi scored third overall and Benton took fourth. Drake eventually slipped to fifth overall.

Although Goodyear took the race, Patuelli finished second and took the Canadian International-class title for the Montreal Euro-Kart team and also secured the overall points title by two points over National-class driver Haney.

DAP emblems were everywhere — Patuelli took a victory lap with a huge DAP flag and smiles and back-slapping hugs filled the Euro-Kart pits.  I didn’t know it yet, but this was a team I’d be much closer to in the following year.

From a public relations standpoint, the event was a spectacular success.   Many spectators lined the barriers and fencing throughout the day and it was one of the few races that brought together disparate drivers from the different, and often distant, series around Ontario and Quebec.

In addition to the National and International class, there were several karts with McCulloch (Mac 92) and Yamaha KT-100 engines. A good friend from Ottawa ran in those races — young David Pimblett. He was driving his Margay/McCulloch well, but was disqualified because the bag of lead shot he used to meet the required minimum weight limit fell off before the end of the race.

One of my favorite shots from the event, showing the pamphlet the organizers printed up and handed out — obviously very interesting to young aspiring racing drivers!

This was the second race report to be published in Wheelspin News, the sister publication to Autosport Canada. Clippings below…