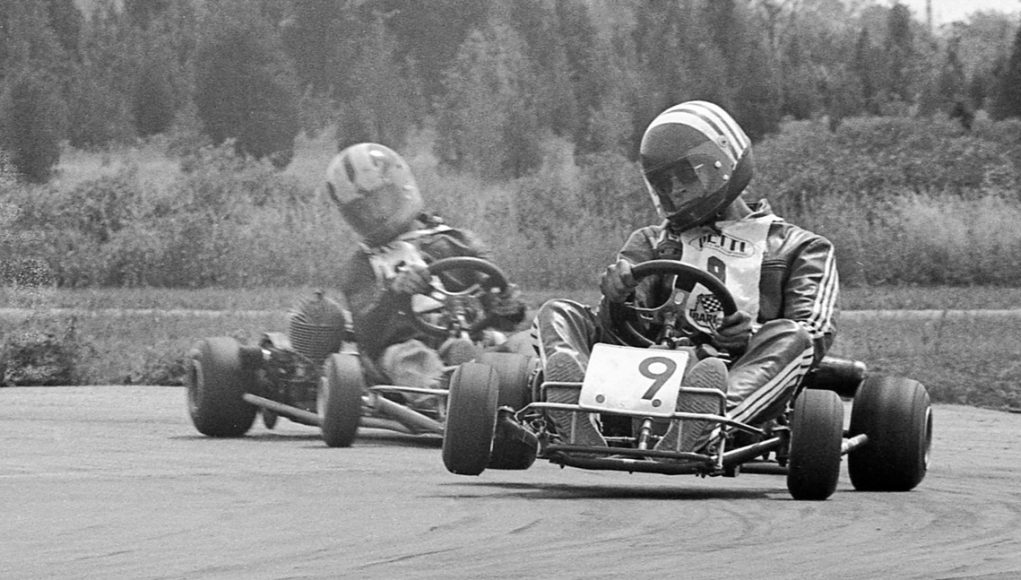 These are the stories of the first Canadian Pro Series championship karting series that toured several tracks in Ontario and one in Quebec in 1978. Even though I didn’t race much that year, I was involved with the organization and publicity for the series and got an inside look at this inaugural season. (Prints or hi-res digital copies of photos are available in our client galleries.)

Aug 6, 1978 — Goodwood near Toronto was the first-ever track I raced on outside of Ottawa back in 1976.  It was everything that our racing track in Ottawa wasn’t.

We were racing on the local quarter-mile oval with a road course marked out with pylons. Goodwood was a specialty-made kart racing track with long straights, actual curves, an actual paddock, a kart shop, and refreshments for between races.  You needed a hotel for an overnight stay and it certainly felt like big-time racing compared to what we had in Ottawa at the time.

My second out-of-town race was at Picton, near Belleville.  Picton was also a purpose-built kart track. But with open fields surrounding the track you could just drive up, pitch your tent, build a campfire, and you were set for the weekend.  It also had a kart shop owned and run by John Long, a big man with a big heart.

The track itself was about as long as Goodwood but a little bumpier.  I remember that one particular corner, a fast left-hand carousel on the far side of the track just seemed to go on and on forever — it was very tiring on the right arm.  In fact, after a number of racing laps, I would put my knee under my right elbow just to keep the steering wheel turned! Certainly a very challenging track.

Picton was the venue for the third round of the 1978 Canadian Pro Series for National and International karts and marked the halfway point of the season.

This was the first race event that I reported on for Toronto’s Wheelspin News, the companion motorsport publication to Autosport Canada.  As I reported in a previous post, I’d applied for a job there in 1977, but in the end didn’t get the job.  The editor still wanted me to write about the Canadian Pro karting series.  It sounded like fun and it was up my alley, so why not..?

The nice thing about reporting on a karting event is that, unlike most car races, you can actually see the entire track!  So standing in the middle of the course with a portable cassette tape recorder (this was 1978, after all) dictating what was happening in real time was pretty straight-forward.

Among the bad things about it —?   Hoping that the recorder was actually recording (because I’d be sunk if it wasn’t), getting dizzy as I quickly turned in circles trying to follow the lapping karts, and breaking away to take pictures from time to time while trying not to miss anything!

When I got home, transcribing from the tape was certainly a laborious process and it was quickly evident to me that I wasn’t doing this for the money!

Once the story was submitted, it seemed like forever before I’d see the story in print and my name on the byline.  This WAS before computers and the internet revolutionized publishing…

This was the story I submitted about this race:

Montreal’s Richard Fugère won a hard-fought International class victory over local driver Wrex Roth in round three of the Canadian Pro Karting Series. Fugère, a member of the Centre du Karting racing team of Montreal, won two of the three heats with the third heat going to Roth.

National class saw a surprise winner in Toronto’s Tony Serravalle. Although Serravalle only won one of the three heats compared to T.J. Dersch’s two wins, a 13th place in the first heat put paid to Dersch’s chances against a more consistent Serravalle.

Entries reached the low point of the season so far with only 30 drivers registering over the two classes. Conflicting events were suspected as the prime cause.

Euro-kart, of Montreal, had their DAP- engined Grand Prix karts for Fabrizio Patuelli and Paul Embury. Gavin Sharvel was in attendance apparently as a reserve driver in case Patuelli’s bruised ribs did not last the day. Patueilli, however, was determined he would race.

After his disqualification from first place in the National class at the previous event at Quyon, Richard couldn’t use his national-class engine any more in Pro racing. And since he didn’t have another ready, he moved up to the International class, putting his Centre du Karting team in direct competition with the successful Euro-kart team.

Also in the National class were both winners from the two previous events, Matt Haney in his BM/Parilla and Jon Snadden in his BM/BM.

Randy Packham, who missed the Quyon event after splitting with Mason racing after Goodwood, turned up at Picton on the David White team. White, of Bulova Formula Ford fame, had broken two ribs in his Quyon accident. The driverless team picked up the teamless driver and Randy had a ride.

From the start of heat one it was local driver Wrex Roth edging Mario Petti for first place. Nicholson (sorry, I don’t have Nicholson’s first name) and Fugère slotted in behind, followed by Steve Navratil, Alain Trottier, John Drake, Fred Russell, then Patueilli and Embury.

By lap five Roth pulled out two seconds over Petti who was just slightly ahead of Nicholson.

Fred Russell pulled off with a broken engine.  Fourth-placed Fugère made his move on Nicholson and was soon up to third behind Petti. Within a lap the Montrealer passed a slowing Petti and set out to close the gap on the leader.

By the tenth lap Fugère was making it very hot for leader Roth but he could not make the pass before the flag fell. Nicholson finished third and Petti fourth.

At the start of the second heat, Roth again grabbed in the lead with Fugère second followed by Nicholson and Petti. Petti retired early to put Patueilli into fourth with Navratil close behind in fifth.

Fugère was nosing in on Roth at every opportunity. For 13 laps Roth kept Fugère at bay, but on the second-last lap Fugère slipped inside at the end of the straight and was away for the win a lap later. Nicholson again claimed third and Patueilli finished fourth.

As the starter dropped the flag for the third heat Roth again jumped into the lead, followed by Fugère, Nicholson, Patueilli, Trottier, Petti, Drake, and Embury.

But a spin on the third lap brought Roth to a stop and Fugère, under no pressure now, cruised home for the win with Nicholson second and Patuelli third.

On accumulated points, it was Fugère who claimed the International winner’s garland. Nicholson took second overall, and Roth, in spite of his eighth-place finish in the last heat, took third.

National class saw Randy Packham in the David White entry take the pole from Mason Racing’s T.J. Dersch. Next was Mark Hepburn and Tony Serravalle on the second row.

Into the first corner Packham was followed by Dersch, Serravalle, Mark Oluper, and Hepburn. By the second lap Packham and Dersch were battling for the lead, followed by Serravalle and Oluper two seconds later.

On the third lap Dersch scraped a curb and loosened his engine mounts. A quick stop cured that, but it put him out of the running.

Packham was stopped with a blown engine on the seventh lap. This put Serravalle out in front with a short lead over Hepburn who was now holding off Scott Thorton, with Quyon winner Jon Snadden in fourth.

Serravalle finished first, but Thorton grabbed second two laps from the end and gave third to Hepburn. Snadden’s engine blew on the last lap and Roy Smith took over fourth.

In the second heat, Serravalle took the lead from the start with Hepburn, Thorton, Smith and Haney slotting in behind. Dersch was already up to 10th by the end of the first lap and up to sixth by lap four. Smith conceded fourth by lap nine, and third-placed Thorton gave way a lap later. Two more laps and Hepburn gave up second to the hard-charging Dersch.

Now he gave chase to Serravalle. Three laps later the young Mason Racing driver took the lead and held it till the flag fell one lap later. Serravalle took second and Haney made it as high as third on the last lap.

Serravalle took the lead from Dersch at the start of the third heat, followed by Haney, Giolanay, Packham, and Arcanselo in the leading group.

For eight laps Serravalle held Dersch, but finally yielded, and the Toronto driver pulled out a short lead. Haney had better luck with Packham though, managing to hold him off until the flag fell.