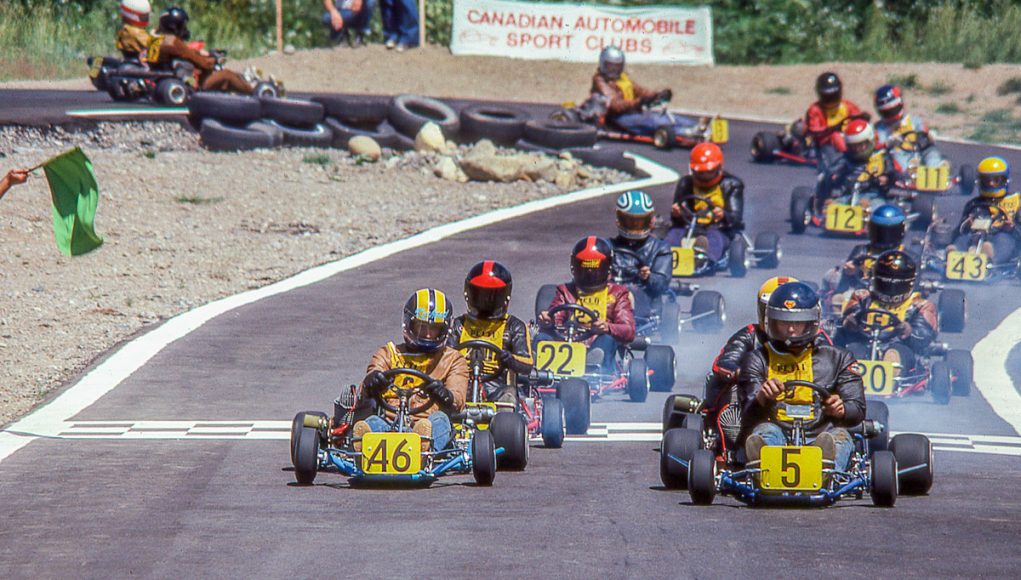 These are the stories of the first Canadian Pro championship karting series that toured several tracks in Ontario and one in Quebec in 1978. Even though I didn’t race much that year, I was involved with the organization and publicity for the series and got an inside look at this inaugural season. (Prints or hi-res digital copies of photos are available in our client galleries.)

July, 1978 — Since I started this news site, several people have remarked on my apparent ability to remember detail that they themselves cannot.  I can’t account for it, but I do — sometimes aided by the detail in photos and by comments from my fellow time travelers.

Unfortunately, this is one time that ability has totally escaped me. I don’t remember a lot about the Quyon round of the 1978 Canadian Pro Series at Le Circuit Quyon.

There’s not much of a record to help me either. I had not yet begun writing race reports for Toronto’s racing publication, Wheelspin News. (For the past 42 years I thought they had actually published the story of this event, but apparently not — the Quyon picture of Jon Snadden that I remember actually accompanied the report about the NEXT round of the series at Picton.) I’ve also checked with some of my readily-available friends who were at the race, but their memories are just as hazy.

It was an intense day so I think being part of the organizing group must have held my focus away from the racing. I DO remember breaking away as the races started to use my camera.  So, fortunately there’s a photographic record we can refer to.

The track: a little different

It was important to the organizers and to the track owners that the event go well:

Surprisingly, the Pro Series organizers booked the track without ever seeing it — I was the only one of the group who’d been there before…

But competitors started to arrive at Le Circuit Quyon already complaining about the time they’d just spent on the road (five hours for those coming from Toronto). Their first look at the track left them a bit bewildered — they’d never seen anything quite like it.

Some of the drivers complained that the track was not up to their standards.  Others, realizing they had a race to run, just got to work and dealt with it.

As I’ve written in recent posts, construction of the track had just been completed. It was modeled on the layout of the Mt. Tremblent/Ste Jovite Grand Prix circuit in Quebec and included the same kind of elevation changes that made a lap of the full-size track so exciting.

Other Ontario tracks were flatter and faster and allowed a driver to make full use of the powerful National and International engines. Le Circuit Quyon was tighter and the Pro karts were definitively overpowered for the track. It required a bit more finesse from the driver to put in a good lap here.

Granted, it was also a little narrower than the circuits these drivers were used to.  Plus, it looked pretty barren — there hadn’t been time for grass to re-grow around the racetrack and there were no buildings: it wasn’t a commercial operation with a need to house rental karts.

It was a karting club track, built by karters for karters.

Getting a quick lap around the track required intense concentration and a physically fit driver (see track diagram, right):

Holding the gas pedal to the floor, drivers accelerated across the start-finish line and quickly steered right into the blind uphill corner 1, compressed into their seat by the sudden ascent.

The kart crested the hill in the middle of the corner at full speed and the rear of the kart would go light and inevitably slide out (oversteer). An instinctual quick correction kept the kart on course before it plunged down the hill and through the esses — a quick right-then-left flick of the steering wheel wagged the tail of the kart through these consecutive corners.

Then it was hard on the gas again snaking through the gradual left, right, and left bends, before braking hard-but-smooth for the slow right-hand hairpin, concentrating on getting just the right line through the corner to have maximum acceleration onto the following straightaway.

Speeding away from the corner with the pedal-to-the-metal pushed the driver back into the seat. In mid-straight the kart launched over a hill, getting airborne as it powered over the crest. With only a micro-second’s mid-air respite, the driver was back on the brakes for the next right-hand kink followed by a short uphill braking zone for the hard left “bridge turn”.

Then, back on the gas for a short run to the final hairpin, a sharp right, and a final full-power run to the start-finish line.

A driver’s goal was to be perfect and precise with every lap — not an easy thing to do.

In a race, passing was difficult. It was like the tight confines of Monaco for Formula 1 drivers. Good passes were rare. Indeed, I recall making a good pass going into the final hairpin, then being protested for it and disqualified…

What I remember of the racing

As at the previous event at Goodwood, there were two classes:  National and International. Three heats were scheduled for each class to determine the overall class winners.

Local driver Jon Snadden had a difficult time at the last race at Goodwood, but here at Quyon he had an advantage: he already knew the track. He’d just run a successful championship campaign the year before in the rain-shortened OHKRC series.

Jon’s main competition in National class was Richard Fugère from Quebec. Richard and his team had a unique advantage — while most drivers were using a nine-tooth pinion gear, he had found an eight-tooth pinion, which gave him a must shorter gear ratio than anyone else and, as a result, quicker acceleration through the tight corners and short straights of this track.

Richard took pole position and the win in the first heat. The photos show he led karts #14 and 5 from the start (perhaps some of you can identify those drivers), then Jon, followed by Goodwood winner Matt Haney, Pierre Prevost, and TJ Dersch.  I’m not sure which driver Jon passed, but he ended up finishing that heat in third place.

As a result of his win, Richard again started on pole in the second heat;  Jon’s grid position was right behind him in third.

In the last heat, Richard again took the victory and Jon had worked his way up to second place overall. But in post-race tech inspection, Richard’s win was struck down after his engine’s exhaust port was measured to be 0.003 inches too wide handing Jon first place and the win.

During the race, a seasoned Bulova Formula Ford champion (1975), David White, had an accident in which he broke two ribs and, as a result, missed the balance of the season.

In the International class, it was a tight contest with Paul Mason, Bill Packham, and Goodwood winner Fabrizio Patuelli.  Unfortunately I don’t have any of the details of the race but at the flag it was Patuelli of the Eurokart team for the win ahead of Paul Embury in second.

In many ways, the event was a success. The organization worked well, the local club put a great effort into preparing the track for race day, and there had been good racing.

But the reaction of organizers and drivers to this different kind of kart track meant that few National level racing events were ever held at Le Circuit Quyon. And, unfortunately, it drove a spike into Share 50/74’s dream of turning the facility into a self-sustaining venture.

Organized local championship racing action in Ottawa would not really recover for another year-and-a-half.