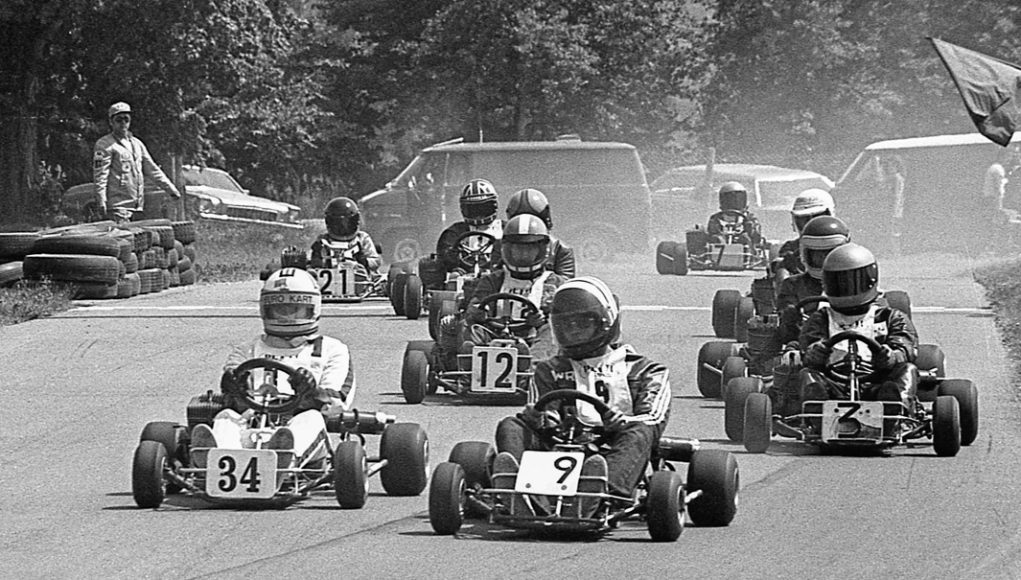 In 1978 I didn’t race too much myself, but I was involved with the organization and publicity for the first Canadian Pro Series for National and International class karts that toured many of the well-known tracks in Ontario and one in Quebec. These are the stories of the races that year.

Want a print or hi-res digital copy of a photo on this page? Visit our gallery.

Racing at the club level in Ottawa came with limitations.

We had to use ~12-horsepower McCulloch engines (originally designed for chain saws), relatively hard tires, and competed mostly against the same group of drivers every race. The upside of these measures was that they helped to keep costs within reason, which you’d expect at the local level so that new people could get involved.

But in the previous year, 1977, we’d tasted some out-of-town racing against new drivers who had equipment more advanced than ours. By 1978, some of us were ready to step up our game and compete at a higher level.

There was lots of opportunity. We were pretty close to the Quebec racing scene in Montreal. The Ontario Kart Racing Association (OKRA) held large events throughout Ontario and a new group was launching the Canadian Pro Series in Ontario and Quebec based on a set of national and international rules.

Also, Fred Russell, the former president of the Ottawa-Hull Kart and Recreation Club (OHKRC), entered the International class in a British Zip kart and also raced in some of the OKRA races.  Although I don’t know it for sure, I suspect he was a little tired of local politics and chose to race elsewhere after the policies of Share 50/74, the company that owned the Quyon track, effectively sunk the OHKRC.

The Pro series opened at Goodwood near Toronto, continued at Quyon in Quebec, then at Picton near Belleville, again at Goodwood, and wrapped up at Square One Shopping Center in Mississauga, a suburb of Toronto.  It wasn’t really Canada-wide as the series name suggested (and as pointed out by western racers several years later), but then neither was F1 a “world” championship when it got started.

These karts used specialty-built racing engines with rotary induction to feed fuel to the cylinder resulting in twice the horsepower of our club engines. This meant that many karts had a power-to-weight ratio of 1 horsepower for every 10 pounds (kart and driver) and that they could reach speeds in excess of 100 mph at some tracks (some estimated 120 mph…).

The International class was governed under the same rules as the FIA’s International karting, the same class of karts that Grand Prix driver Ayrton Senna raced before progressing to Formula 1. International drivers could use stickier and more expensive tires, slide carburetors, and modify their engines.  National class kart drivers were not allowed to modify their engines as much, were restricted to 24mm butterfly carb plates, and raced on harder tires. As a result, National karts were less expensive to run.

I HAD hoped to follow Jon into the Pro Series, but all my extra cash had to go into a new engine for my Dodge van after a sudden drop in oil pressure had ruined it that winter.

My girlfriend/fiance Niki pointed out that, as a result, I wouldn’t be able to afford to go racing that year — a notion I found quite devastating. I rebelled against a complete moratorium and continued to race in the local club, but driving in the Pro Series was out of the question.

However, a sudden and surprising new opportunity helped to lift that gloom.

Back in 1978, the Goodwood track was run by the Petti family. Mr and Mrs Petti ran the rental operation and son Mario Petti ran the racing business, including the organization of the Pro Series.

He asked Niki and I to help with the Pro Series race organization:  I was to help with media and Niki was to be the race director — I think largely because she had a reputation of not taking any BS from anyone.  I jumped at the chance to be close to the action since I was never very good at just being a spectator.

We arrived for the first event at Goodwood. There were lots of old friends there and many new ones to be made: Bill Packham, Randy Packham, and TJ Dersch of Blue Streak Racing in Toronto, Roberto Dionisi (Canadian DAP karts importer) and Fabrizio Patuelli from Montreal, Wrex Roth from Belleville, Ray Gaggi, Matt Haney, Richard Fugere (whom I’d met in the 1977 race at St. Rosalie), and many others.

There were also many names from Canadian karting that were missing: Colm O’Higgins, John Long, and others. The Canadian Pro Series wasn’t the only game in town and those who raced in other series like the OKRA didn’t necessarily follow the philosophy of International karting and raced, as it were, to their own drummer.

Yes, there is philosophy even in karting!

The racing was quite good from a spectator’s point of view. There were lots of entries particularly in the National class and fairly close racing between the front runners.

You have to remember that this all happened 42 years ago and the details of a race that I wasn’t in are few and hazy. On top of that, even though Wheelspin News had asked me to write about the series for their publication, I wouldn’t submit the first story until the Picton race — so I have few race details for this post as there is no race report to draw from.

But the pictures tell the basic story.

In the National class, Richard Fugere (#46 from Quebec) and Matt Haney (#22 from Ontario) battled for the win with #2 TJ Dersch and #8 Derek Wright close behind.  In the end, it was Matt Haney who came out on top.

See the complete gallery from this race and own a print.

In the International class, Fabrizio Patuelli from Montreal in the #34 DAP won from Wrex Roth (#9 from Belleville, Ontario), and Bill Packham of Toronto’s Blue Streak Racing (#1 Deavinson/Sirio).

See the complete gallery from this race and own a photograph.

Jon’s weekend was a little frustrating. He was used to running at the front in Ottawa races — being mid-field here would have been an unfamiliar situation for him. He qualified his BM (#50) about mid-pack and ran well for his first race before encountering engine troubles. He didn’t finish the weekend and looks quite dejected sitting by his broken kart at the side of the track (see gallery pictures above).

It wasn’t much better for Niki — her first weekend as race director was her last. Although she was good at arguing her point and not taking BS, her decisions were being overturned as drivers went over her head to argue their points. She saw that as another kind of BS that she didn’t want to deal with and did not continue in the role.

The next race would be at our home track at Quyon, Quebec, and out-of-town racers would be in for a bit of a different experience than they were used to…