Home My racing life 1978: a chaotic start to a new year 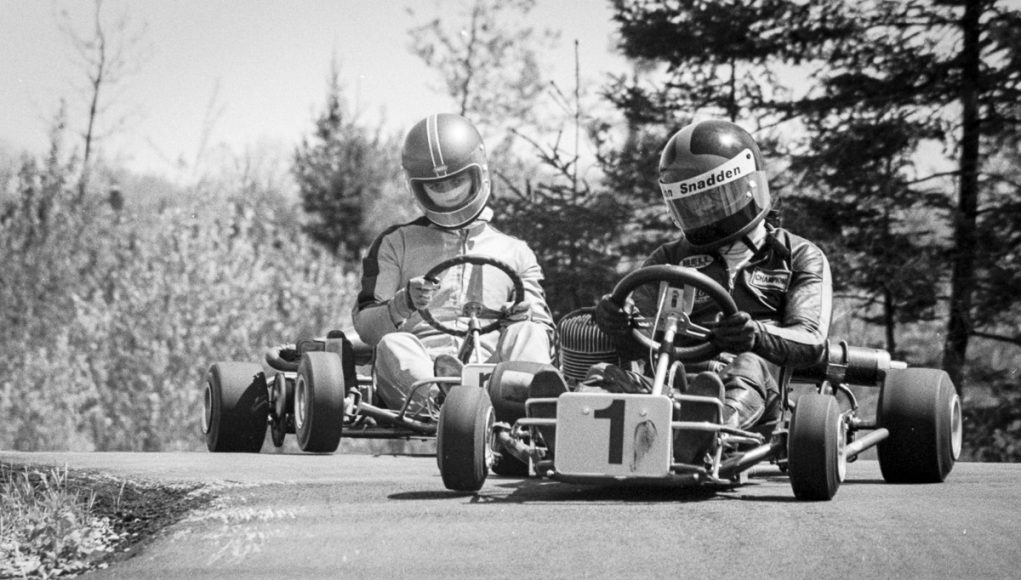 After the aborted 1977 championship, the meltdown of the OHKRC karting racing club, and the (to borrow a modern phrase) “emotional distancing” of various racing friends after the emergence of Share 50/74, it reminded me of waking up with a headache wondering what had really happened the night before.

As a result, 1978 started quietly for Ottawa karting.

Share 50/74 DID organize their new club, the Quyon Racing Club (I designed the logo for it). But there was no organized Ottawa championship in 1978 or in 1979. It would take until 1980 to get another championship organized and really revitalize the Ottawa karting scene.

Running the track as a business didn’t really catch on in a big way and those of us who had borrowed money the previous year to get the track paved just had to pay back the bank out of our own pockets.

In 1977, some of our drivers had a tantalizing taste of racing outside Ottawa. So they decided to race in Ontario-sanctioned races in Picton (near Belleville) or in the new Canadian Pro kart series organized by Mario Petti of the Goodwood kart facilty near Toronto. (Dave Elliott and I had raced there in 1976 under the patronage of McEtte Enterprises with Al McRory and Paul Joinette.)

Jim Bolton raced in Picton a number of times. Jon Snadden bought himself a National-class BM kart to race in Petti’s Pro Series. Fred Russell (president of the former OHKRC) ended up running in events in both series.

Jon sold his Birel to a new racer, Barry Thoms, who became a staple with the local club and who I am still in touch with to this day.

I still had my Margay Panther, but with not much racing organized in Ottawa there wasn’t much point in investing money to upgrade things — so I stuck with the same kart, same engine, and same aging tires.

I’d moved out of my boyhood home and into my own first apartment, which meant there was nowhere to keep the kart. So, it stayed in the back of my 1974 Dodge van for a number of months, which meant my usual regimen of a complete tear-down, rebuild, and clean up between races was impossible.

Barry and I tried sharing a lock-up garage in town for a while. But it was time-consuming to get there, dark, and it had an earthen floor that made it difficult to do my usual clean-up and maintenance.  I realized how much I’d been spoiled at home. My ability to do the race preparation as I wanted was suffering, so it was just as well that there wasn’t much racing going on.

Besides, I had other racing-world opportunities coming my way.

In 1977, I’d applied for a reporter job at Autosport Canada in Toronto; I’d even got lucky enough to get an in-person interview.  In the end, I didn’t get the job — the editor said he was afraid I might just use the job to get myself into racing and then disappear. That was a pretty lame excuse, I thought, for not hiring someone qualified and enthusiastic.

Early in 1978, he called back and offered me the job! This time it was my turn to say no as I was now entrenched at Bell-Northern Research making much more money than he could pay me. He still wanted me to write for their sister publication, Wheelspin News, about the Canadian Pro karting series.  It sounded like fun and it was up my alley, so why not..?

We’d also got a call from Mario Petti at Goodwood and he wanted my girlfriend Niki (now a fiance) and I to be involved with his Canadian Pro series organization and help run the show. He asked me to look after media relations and Niki to be the race director (I think this was based on her familiarity with karting and her ability to not take any BS from anybody). It seemed like it would be exciting and we accepted. More on these races in future posts.

Want to own prints of these pictures?  Check out our galleries.

There were a few notable moments during the few race weekends we had in Ottawa:

It’s possible to try just a bit too hard

Sean Sweet and I were running first and second in one particular race. By the last corner it should have been evident to me that I wasn’t going to catch him, but I was still trying. In fact, I was trying so hard that my right front wheel clipped the car tire that was being used to mark the inside of the corner.

I recall seeing the front of my kart suddenly jump up and the world start to spin. The next thing I knew, I was on my hands and knees on the pavement with the kart upside down on my back and trying to see how far behind me the rest of the pack was!

Marshals quickly got the kart off me and we were out of the way by the time the following drivers arrived at the corner.  My full racing leathers and leather gloves worked well and I was unhurt — the gloves were a ripped-up mess but they’d protected the skin of my hands.

In the pits, I described to the rest what I’d seen and felt. They just stopped me and said it didn’t happen the way I thought it did. Apparently, I hadn’t just flipped the kart over; it had actually rotated a few times in the air before it landed on me. It happened so quickly that I’d no clue that it’d rolled more than once. I felt luckier than ever to be unhurt. The only casualty was my poor gloves — my father had given them to me and I really liked them.

How to make everyone run… fast!

Another incident was quite funny — that is, if you were me. For everyone else, I think they almost had a heart attack.

I was lapping the track on my own during practice and powered past everyone standing in the pits, across the start-finish line, and up the hill to negotiate turn one.

As I hit the corner’s apex at the crest of the hill, the back end of the kart wiggled strangely and I had to work the steering wheel to keep it in line. As I exited the corner and sped down the hill, I saw my inside rear wheel quite happily on it’s own, bouncing down the track beside me!

THAT was the reason for the wiggle — the wheel had come off at full speed at the top of the hill and the kart was actually balancing on three wheels and the gear sprocket!  I quickly slowed down and pulled over to the side of the track.

I’d forgotten that people in the pits can’t see the track after the crest of the hill — it’s hidden by an earth embankment and the karts are hidden from view as they exit the corner.

And their view of the incident had been a bit more scary than mine.

To them, I’d driven quickly into turn one, gone over the hill, and then disappeared from view. The NEXT thing they saw was my bouncing rear wheel appearing from behind the earthen bank — but not me!!

As I got out of the kart, a running mass of frantic people appeared over the hill going faster than I’d ever seen them go before! I stood up, took off my helmet, looked at them, and just said… “What…??”

Temp gauge commands too much attention

I think this last story was actually in 1979.

I bought a heat gauge for my engine to, obviously, keep an eye on it’s temperature.  In an air-cooled two-stroke engine it’s the head temperature that’s important. So the sensor is a ring that fits between the spark plug and the engine head. It’s connected to the gauge that’s mounted on the steering column so the driver can see it easily. I’d used it a couple of times in practice and when not driving hard it would get up to about 210-250 degrees.

Then I went out with some other drivers and the lap times came down as we pushed harder. Pete Kelly, a newer driver who was pretty quick already, was behind me and we went nose-to-tail down the straight at full speed. That should have been the proper time to glance at the gauge.

But I, of course, waited until we arrived at the next corner.

Under braking to take the left-hand, uphill, 90-degree corner I looked down at the gauge. I was just a bit shocked to see it above 320 degrees for the first time and my quick glance turned into more of a long stare! When I looked back up, I’d missed the corner completely and was headed for the tire wall on the outside of the corner.

There’s a thing in car racing called “the marbles”, which refers to dust and bits of rubber on the parts of the track where drivers don’t normally go.  As you can guess by the name, when you’re on “the marbles” it’s a bit slippy.

I was on the marbles. And it was a heart-stopping moment.

I managed to gather it up and make it through the corner but in an extremely untidy way. Of course Pete went past, which gave him a great deal of pleasure judging by his big smile and excited chatter afterwards!

Me?  I took the damn gauge off the kart and never used it again…