Home My racing life Finally racing on our own track 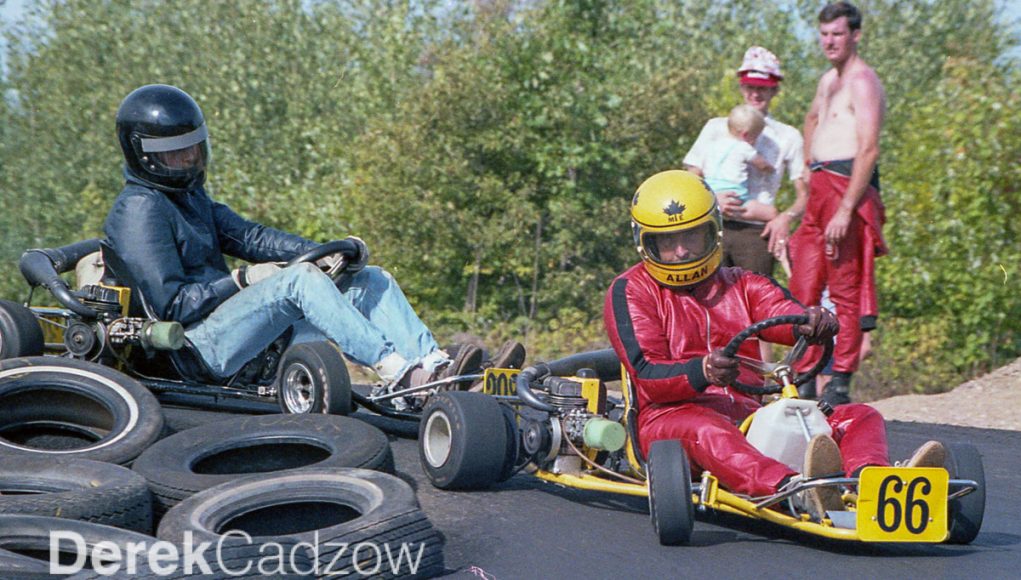 September, 1977 — For me, our very first race weekend on our new track at Quyon, Quebec, was pretty close to perfect — I scored pole position, I won my heat, and then I won the final.

It doesn’t get much better than that.

Our new track had just been completed a couple of weeks before. We were anxious to get going but the paving crew told us to wait until the asphalt cured properly before racing on the new pavement.  When the time finally came, we were more than ready.

Our Quyon track was modeled on the layout of the Mt. Tremblent/Ste Jovite Grand Prix circuit in Quebec and included the elevation changes that made a lap of full-size track so exciting to drive.

Even though our karting track was smaller, it still had the same blind uphill run into turn 1 and the same sudden descent while exiting the corner.  It also had the hill in the middle of the straight that could get the fastest karts slightly airborne.  It was challenging and exciting all at the same time.  We couldn’t wait.

We’d travelled up to the site a couple of times during paving to check up on our investment.  About a dozen of us had bought shares in the company that owned the site. Each of us had also borrowed money from the bank and pooled it to complete the paving job.  Paul Joinette had spent most of August working with the crew to get it all finished.

Now we were finally ready to race. The racing surface was smooth and new, but the grounds were still bare (no grass).  In fact, if you cut corners too closely while lapping, the kart’s wheel could easily fall several inches as the ground was not always at the same level as the racing surface.

Most of us camped at the track even though the facilities for camping on that first weekend were virtually non-existent.  But these were the days of customized vans with interiors that would make today’s HGTV home designers drool with envy, so some of us pitched tents and the rest slept in their half-finished vans.

My recently-acquired 1974 Dodge van had a new paint job which nicely covered the previous owner’s “Biere Froide” grocery store logos, but I hadn’t started to build out the interior yet.  I think we were the only ones to stay in the old hotel in nearby Quyon.

The only disappointment of the weekend was Jon Snadden’s decision not to race. I forget why that was — I think he might have had an eye issue or something. So this weekend he played starter and race director instead.

Ever the joker, he turned up wearing a light blue t-shirt with SNABBON! written across the back in big black letters. His explanation: whenever he got his name in the paper, they always got it wrong so he figured he would play along.

We had a good entry list for this event: Al McRory and Paul Joinette, the pair who’d restarted kart racing in Ottawa, Jane Wagner, Dave Potterton, Sean Sweet, Jeanne Joinette, Dave Elliott, Fred Zufelt, and a few others whose names I can’t remember.  Everyone was divided into two heats and the finishing order of those determined grid places for the final.

I had a good start from pole in the first heat and took the lead. Sean Sweet (#26) and Fred Zufelt (#21) tangled for the first lap, which let me get some distance away from them. I kept focused on the road ahead and, halfway through the race, when I looked behind me I was astonished to see everyone else about half-a-lap behind!

I slowed down to close the gap because, after all, we were there to race. But then I noticed people in the pits, particularly my girlfriend Niki looking really annoyed. They thought I might blow the lead and the race.

They could have been right, because I remembered the story of George Eaton in a 1969 CanAm race in which he took it easy after achieving a commanding lead and then couldn’t get his mojo back when it was time to speed up. So I got back up to racing speed and took the flag with Sean Sweet second and Fred Zufelt third.

In the second heat, Jane Wagner (#5) led from pole and took the checkered flag first from Al McRory (#66) and Dave Potterton.

On Saturday evening we had a nice big bonfire, some nice cold beers, and lots of good camaraderie.  We were far from the towns and cities around us and, once the night settled in, the sky literally filled with stars — it was a truly awe-inspiring and unforgettable sight.

It was the best of times and, at that moment, I thought nothing could make me happier than just racing and camping with my friends forever…

It’s a sad by-product of doing this blog that I’m finding that some of the old tracks I used to race on have been ignored and disused and no longer host racing. But our track still survives today as Le Circuit Quyon and it has been extended to several times it’s original size.