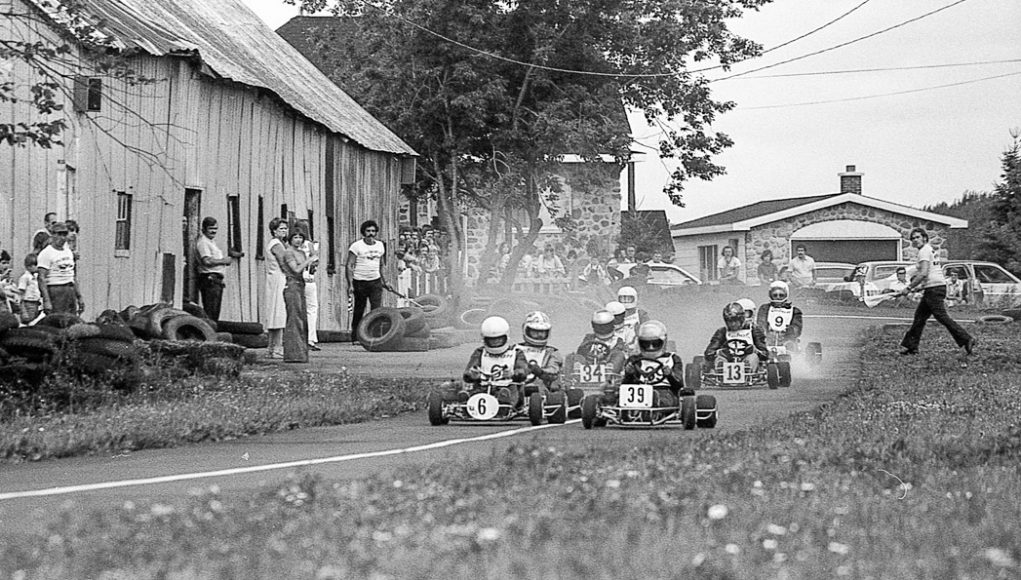 After staging a very successful public race at the Museum of Science and Technology in Ottawa, you’d think that our local Ottawa-Hull Kart and Recreation Club (OHKRC) would be getting ready to accept a flood of new members.

After all, we’d had a full house of spectators, the racing had been terrific, and we passed out all of our information brochures (well, all but one, which I still have today…)

But instead, things were getting complicated.

At a very young 21 years of age, I wasn’t really thinking about all that. Back then, I took life as it happened and didn’t think any deeper than I could see. And I wasn’t alone in missing the signs that our cosy little club was starting to unravel.

Instead, I was getting ready to travel to St. Leonard in Montreal, Quebec, for a parking lot race hosted by the Montreal club.  The Quebec region was very serious indeed about their kart racing. Their clubs were affiliated with the Canadian Automobile Sports Clubs (CASC), formerly the Canadian arm of the FIA (now it’s the ASN Canada) which oversaw most motor racing worldwide including Formula 1.

We arrived in Ste Leonard on a warm sunny Sunday in July to be greeted by throngs of Quebec-based karters for one of the biggest races I’d ever been in. In practice, I found the track rather slippy and they used tires to mark the course, which is never a favorite of mine because if you hit one… well, who knows where you end up.

Starting dead last behind 19 other entries in the first heat, I stalled on the pace lap trying to let the pack catch up to me so I could take my grid spot. So much for my first heat. AWK-ward…!

Then in the second race, I RAN OUT OF FUEL after seven laps. Things were not going very well so far.

But in the third heat, I worked my way from 19th to third by the ninth lap!  …and then my throttle cable snapped. Ugh…

Thoroughly incensed at my bad luck, I immediately found the throttle linkage on the carburetor with my hand and finished the race with one hand on the steering wheel and the other on the engine operating the throttle. At least that was something to be a bit proud of.

When they announced the overall finishing positions, I was classified fourth. After all the troubles I’d had, I couldn’t believe I’d finished that high (and neither could some of the others), but the officials were adamant that it was correct. So I quit arguing…

A week or so later, some of our club members visited Mont-Ste Hilaire, just east of Montreal close to Riviere Richelieu. I didn’t go, but Jon Snadden reported that the track was quite bumpy. Nevertheless everyone seemed to have had a good race and, again, they were warmly welcomed by the locals.

Meanwhile back in Ottawa, I started to hear about an organization called Share 50/74. I soon learned that this was the company, formed by some of our club members, that legally owned the land on which our new track was to be built.

This revelation caused a bit of a stir among OHKRC members because many of us had the mistaken impression that it was the club and club members who owned the land. After all, it had been the club who held raffles and events to raise money to build the track. Now some club members wanted to know what had happened to that money. Rifts in our social club were beginning to appear

Anyone could ask to join Share 50/74 but the price to play was a minimum share purchase of $500. (For an idea of how much that was in 1977, I’d paid about the same amount for my kart and engine a year before.) They invited me to join, but I didn’t have a spare $500 lying around at that moment. Besides, I wanted to think about it for a while given the uproar this was causing amongst my OHKRC friends.

Leaving behind the controversy for a weekend, I went alone to the next race at St. Rosalie, Quebec (annexed by Saint-Hyacinthe in 2002 so you won’t see it on a map anymore).

Although a bit narrow, the track was nice and smooth with a long straight and banked corners on the backside of the course. There were two classes being run: the 100cc McCulloch class (mine) and a class for either national or international spec engines (I don’t remember which but it was likely national).

My main competition for the race win was a fellow we’d met earlier — Richard Fugère. I didn’t have the correct gear for this long straightaway and though I was quicker through the twisty section, Richard had the legs of me on the straight and would gain about a kart length on me each time. But I could quickly catch him again in the turns and stayed very close to his bumper.

We ran like we were chained together for most of the race and, on the second last corner, he spun. I braked too hard and nearly let him recover and take the race, but I squeaked it out and took the flag first.

In the second heat he didn’t make the same mistake and I finished second, right behind him.

In the third heat I started from pole but didn’t get a good start. While chasing him again, I crested the small hill on the back straight and the chain flexed off the gear when I landed. I retired and he won the third heat.

Overall I got second place for the day. My consolation was that we broke the lap record during Sunday morning practice by a very small margin, if Niki’s hand on my stopwatch was correct.

Meanwhile back in Ottawa, I’d decided to accept the invitation and buy shares in Share 50/74.

Before I bought in, they shared a plan whereby a group of shareholders would be asked to take out individual bank loans for $1,200 and collectively pay to pave the track. For a 21-year old just recently out of college, $1200 was not a small amount of money. I could have bought two racing karts with that money or it would have paid half the loan on my (used) Dodge van.

After some thought, Niki and I decided we wanted to help get our Ottawa track finished and this looked like it would be the only way to do it.  Raffles and Euchre nights only brought in so much money.

Jon, Fred Zufelt, Dave Elliott, Paul Joinette, Al McRory, me, and others were part of the group who borrowed the money.

For the rest of the summer, Paul worked with the pavers at the Quyon site to complete the track and get it ready for racing. Early in September we got the word that it was done and we just had to wait a few weeks to let the pavement cure before racing on it…

So we finally had our track. But the social cost had been high and it helped to sow the seeds of division amongst our previously friendly club membership.

And, in the next chapter of this story, OHKRC’s hurried attempt to hold their 1977 championship before the Canadian winter arrived would take the club to the very edge…