Home My racing life Showdown at the science museum 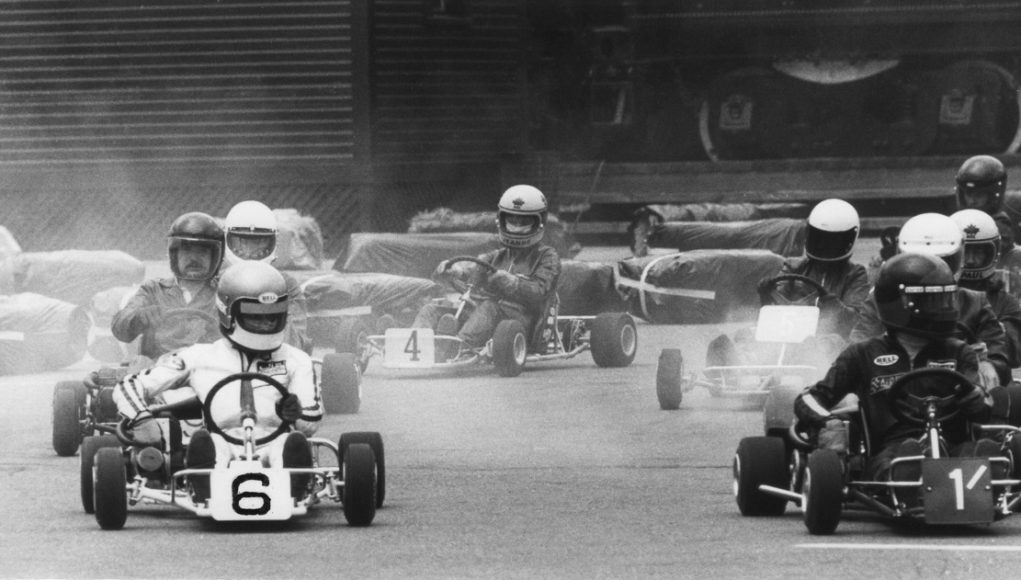 Black-and-white photographs in this story are by Dirk Van Battum.

June, 1977 — The expected showdown between Jon Snadden and I materialized at a very public event in the parking lot of Ottawa’s Museum of Science and Technology.

We’d raced there before with radio-controlled cars, but this was the first time we’d put on a public race with karts.  Dave Elliott, Paul Joinette, and Al McRory worked at the museum and I think it was Dave who did most of the heavy lifting to get the event organized.

We hoped it would be a showcase for what modern karting was all about and encourage more people to join us. We even designed and printed a basic brochure to hand out to the crowd.

This event had an entirely different atmosphere from any other kart race I’d attended so far. There were throngs of spectators, we had entries visiting Ottawa from Picton, and instead of the usual wide open spaces and relative peace between races, the parking lot was packed with people and excitement and competitive tension all day long.

We also had a race announcer, the Ottawa Citizen’s motorsport writer Doug Hardie, in a van with a PA at the start-finish line along with Scott MacKenzie, a Formula B racing driver whom you may remember from a previous post.

Spectators were packed along the rail beside the track. During the club’s morning track-walk, I voiced a concern about one corner that came close to the crowd.  “Let’s declare it a permanent yellow-flag corner,” I said.  “No passing here to make it safer.”

Everyone agreed and we got ready to race.

Shortly before the start, two kids came rushing up to Jon and I and told us excitedly about how they’d bet each other on which one of us would win the race.  I asked why they thought we might win instead of one of the other drivers.  It was our branding:  Jon’s all-black look and my all-white look. I was a bit uncomfortable with that and suggested a gentleman’s bet (no money) would be best — but they’d already made the bet.

There were two classes:  light (Jon and I were in that class) and heavy (Fred Zufelt and Dave Elliott were in that one). There were also some karts with four-stroke engines from Picton Kartways. It was the first time I’d seen four-stroke karts in competition and they competed in their own class as they were a bit slower than our two-stroke engined karts.

I sat on pole position for our heat and Jon joined me on the front row.  We’d both learned how to cover the carburetor jet with our fingers for the start (learned at Goodwood the previous year) and we both powered away quickly with Jon into turn one first.

The string of karts quickly fell into a single file line snaking it’s way through the turns and back onto the start-finish straight. I chased Jon and stuck close to his bumper, hoping to draft past him on the straight.

But Jon taught me a lesson in race-craft that day.

Although I was quick enough to get almost alongside him by the end of the straight, Jon protected his position by staying close to the right of the track before turning into the right-hand corner. This forced me to stay left and go around the outside of him into the corner and, since we were immediately at the very next corner and it was also a right-hander, that left me little opportunity to take advantage of my extra speed and complete the pass.

But I stuck to him like glue, lap after lap, trying not make any mistakes and watching him intently for any opening I could use to get around him.  There was only one…

When I saw the opening, I braked a little late into the corner, powered alongside him and we momentarily banged wheels.  He gave way and I was clear of him just as we were coming on to the straight!

Then I realized, I’d just passed him on the corner that we’d made a no-passing zone for crowd safety (remember I was the one who suggested that during the morning walkaround??)   I would have to give up the position or face a penalty.  Duh…

I think I yielded to Jon at the end of the straight on the same lap, waving him by into the first turn. Later Fred Russell, who was the start-finish flagman, told me they’d already pulled out the black flag and would have disqualified me on the very next lap had I not given back the position.

And that’s the way we finished — Jon first and me second.   My young fan did not win his bet.

I believe there were other heats that day, but I don’t remember them as vividly as this one and the results of each were the same.

Shortly before his untimely passing in 2015, Jon told me in an email that this race was “One of my best memories of that period … you and I had quite the little battle”.

Between heats, Jon and I took our turn flagging as marshals and then I went to sit with Doug and Scott in the PA van.  They couldn’t understand why I’d let Jon back through and I had to explain my mistake. And I had to debate with Scott a bit as he was all for ignoring the black flag and keeping the position. Maybe there was a reason he was in the Canadian series and I wasn’t…

Still, I was learning. Jon’s defensive maneuver on the straightaway was something new to me. If I had won the first corner at the start, I would have taken the classic entry line into the corner on the next lap and he would have passed me by diving up the inside. So we were both where we were meant to be at that moment — but I’d remember the trick and not let anyone pass me in that kind of a situation in future.

Other memories from this race: