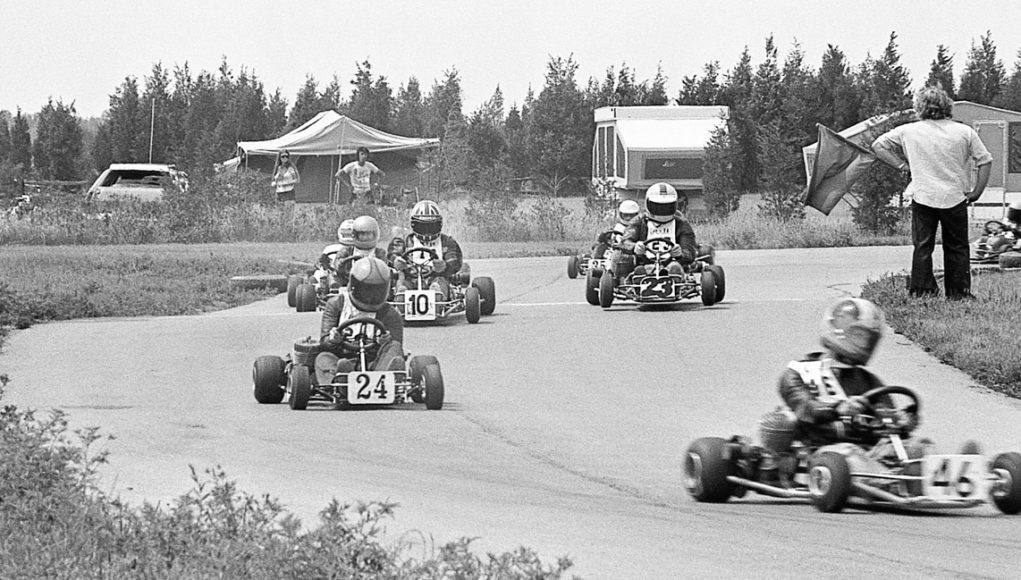 Full disclosure: the above picture is the start-finish line at the Picton racetrack, but it is from the 1978 Canadian Pro race and not the 1977 race documented in this post. There are almost no pictures of the 1977 event available.

May 22, 1977 — The race at Picton, soutwest of Ottawa, was held on a blisteringly hot Victoria Day weekend.

The 100-plus degree Fahrenheit temperatures were almost debilitating to a driver wearing full-length leathers, helmet, leather gloves, and the woolen balaclava I liked to wear under my helmet.  Before each race, we soaked my hair with cold water and wrapped a cold facecloth around my neck.  It felt good enough at the start, but the cooling effect was completely gone by the second lap!

Picton was owned by John Long, a big man with a big heart, and boasted both a track and a kart shop.  It was surrounded by open fields and you could just drive up, pitch your tent, and you were good for the weekend.  The evening campfires were especially nice.

The track itself was about as long as Goodwood but a little bumpier.  One particular corner, a fast left-hand carousel on the far side, just seemed to go on and on — very tiring on the right arm.  In fact, during the races I started putting my knee under my elbow to brace my arm holding the steering wheel.  It was the first time I’d been on a track that used tires to mark the apex of the corners and that made me a bit nervous (I’d find out why a year later…).

From the Ottawa club, we had Jon Snadden and Chris, Fred Russell and Sandy, Fred Zufelt, Neil Hopkins, Niki and I, and others. There were a number from the Picton club and from other locations too.

We quickly learned that the rules had a minimum weight limit — the driver plus the kart had to weigh a certain amount.  Unfortunately, this was back when I still weighed 135 pounds soaking wet and I didn’t meet the minimum weight by a wide margin. I had no weights to put on my kart and I ran around the paddock looking for weights to borrow.

Finally someone lent me some lead shot. That helped with the weight issue, but how do you secure thousands of tiny lead shot to a kart?

It didn’t take long for a brainstorm.

We put all the lead pellets in a green garbage bag and, while getting ready to go on the pace lap, laid it onto my stomach. Then I zipped up my leathers over the garbage bag, which secured the weight inside my leathers, if not to the kart, for the duration of the race. I was ready.

The flag dropped for the first heat and we sped away.  Almost immediately karts in front of me were spinning. One of them hit my kart and I slid off the track and onto the grass where I had a sudden stop against a shallow ditch, bashing my elbow against the engine’s finned head.  It left a big nasty bruise that lasted for days afterward.

The usual protests occurred and the race was restarted.

This time the start was clean and off we went.  I ran pretty well for the first couple of laps but then … the garbage bag full of lead shot started to move around inside my leathers. Pretty soon it had found the lowest point to settle on — sort of between my hips.

This had a big effect on my lap times…

From that point on, I slowly went backwards in the race and finished seventh.

When I got back to the pits I was greeted by an agitated girlfriend who wanted to know what the heck was wrong with my driving…!  When I stepped gingerly out of the kart and explained the situation, her consternation turned to slight amusement and sympathy.  After all, that was one part of me she’d rather keep intact…

In the second heat, my throttle cable pulled loose on the pace lap — how embarrassing.  I pulled off and missed the rest of that race.

In the third and final heat, I ran well and the lead behaved.  After missing Neil on his trip to the grass I finished fourth, which I thought was not bad against seasoned racers and it gave me a final position of sixth or seventh overall.

Fred’s races were also eventful. He had picked up one of the tuned pipes and oil clutches so he could run at this track (the same equipment that Dave and I had bought for the Goodwood race at the end of the previous year).

He’d also installed a temperature gauge from a snowmobile by drilling a few holes in the spokes of this steering wheel and bolting it on. But before the end of the day, the vibration and bumps had cracked the holes and the steering wheel broke, leaving it connected by only one spoke!

At the day’s end, track-owner John got out the rental karts and organized a “Powderpuff” race for the ladies:  Niki, Chris, and Sandy, among others.  Niki wore my helmet which was a bit too big for her and sort of hung loosely on her head.  She was holding down second place and turned her head to see who was behind. But when she turned her head back to the front, the helmet stayed where it was and suddenly she couldn’t see!  We were all howling with laughter.

Evenings around the campfires were interesting too.

At one point, Jon had his kart engine in pieces on the ground as he tried to repair a problem. The Junebugs were already out in force and they kept bouncing off the engine parts, his head, and even off his face. Finally he got so annoyed he picked up his rubber hammer and started beating every one he could find. He was angry, but we were all rolling on the grass laughing our heads off.  It didn’t take long for him to start laughing too; but he growled that he still hated Junebugs!

Later as we were sitting around the campfire, a racer from another town came over and said “what was wrong with Derek today, he’s usually faster than that…?”  (He knew “Derek” by the name on my helmet and leathers, but didn’t recognize me without my helmet on.)   Everyone started to chuckle and we told him about the lead in the garbage bag.  There was immediate understanding.

By the time we were packing up to go home we were feeling pretty grungy after three days in the heat without a shower.  So Chris used a bucket and cold water to give us a hair wash in the field by the tents… Even though it was cold, it felt good to be kind of clean.

We had driven down in Dave Elliott’s van with Fred.  I remember on the way back, when Fred was sleeping in the back, Dave looked at me and quietly said “Watch this…”.  And he proceeded to hit every sewer cover on the street until Fred woke up and yelled…