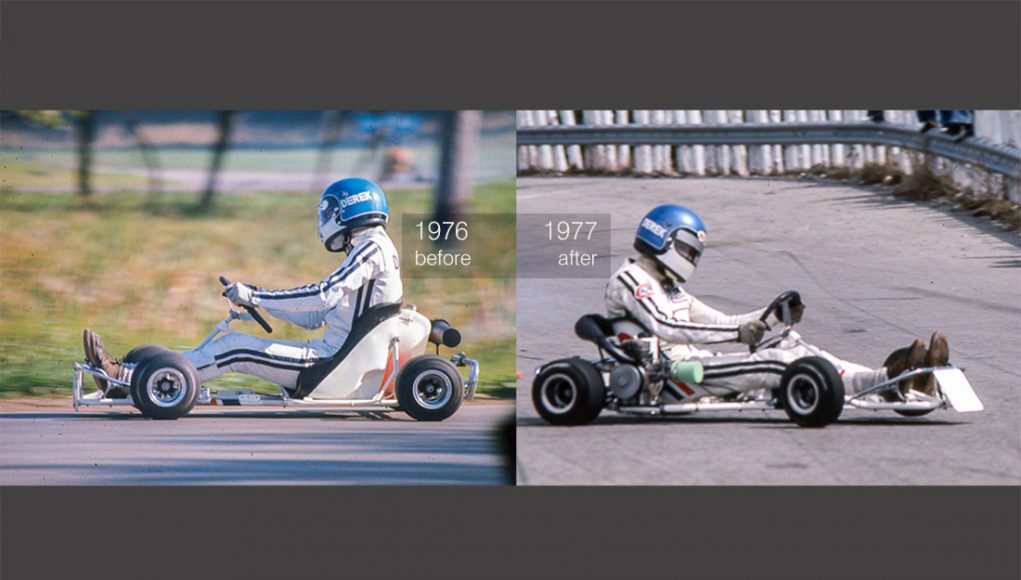 I’ve often heard that comprehensive preparation is the key to success in any field and racing is certainly no exception.

So over the winter I was busy in my basement workshop converting my sit-up-straight Margay Panther kart into one that was more like Jon Snadden’s Italian-made Birel. The Birel had a reclined seating position for the driver, which meant less aerodynamic resistance to the oncoming air (known as drag) and a bit more straight-line speed.

So my goal was to achieve the same low profile by fitting a similarly-reclined seat on my kart. But making that work was a bit more difficult than it sounded:

I started by using a big cutting disk and my trusty Black & Decker drill to slice up the kart chassis in all the places that needed adjusting: the seat supports and the steering support. It took a while and I’m certainly glad my Mom wasn’t there to see all the sparks flying in her basement…

Next, I found a fiberglass seat that fit me like a glove, which was important because I’d already seen several drivers who had visibly bruised ribs after each race from seats that didn’t fit correctly.

I also got a small aluminum gas tank that would fit under the steering wheel and between my legs (no jokes please). The central location for the tank would make for a better overall weight distribution and, because it was in the center of the kart, that balance wouldn’t change much when it drained during the race.

The steering position was a puzzle and I didn’t have a plan to make it right. Happily, I discovered that by turning the steering wheel support upside down, it gave exactly the right angle for the new reclined position.  That was a bit of luck, but I’d take anything to make the overall job easier.

I looked for a welder to put it all back together and found a retired fellow in Osgoode, outside Ottawa.  I showed him how it was to go together. He looked at it carefully, clamped it, and then without any goggles, turned his head away and welded it all perfectly from memory – amazing…

Meanwhile, I put my McCulloch 92 motor back together with the new engine block after we’d discovered the mess it was in after a botched manufacturing process (see the previous post).

It all got a fresh paint job with my Hesketh-based color scheme, including the engine cover (white) and back of the seat (white with the red and blue stripes).

You may recall from the previous post that I bought a tuned exhaust pipe and oil clutch so we could race at Goodwood, near Toronto, late in 1976.

The local club had mandated the less expensive box muffler and dry clutch to keep costs down. But after our first race out of town, we understood we’d need to conform to those rules if we wanted to race elsewhere. So the Ottawa club now made them legal for use in local races.

Finally all the work was done, and when the snow finally disappeared, we took it for a shake-down run at Capital City Speedway.  The test was promising and I was hopeful for the new season. The balance felt good, the new seating position was comfortable, and it all worked nicely.  I was ready and eager to go racing.

I really liked the conversion. The driving position was more comfortable, theoretically there was less aerodynamic frontal area, and a better weight distribution. In 1977, the leathers were already a little less white and the box muffler had disappeared in favor of the tuned pipe. I competed in that kart for four years before buying Jon’s BM from Dick and David Pimblett late in 1980.

But then the other shoe dropped.

We got the news that the owners of Capital City Speedway were turning the asphalt oval into a dirt track and none of us were interested in racing on the dirt (especially after painting my kart white!)

To make matters worse, there still wasn’t a timetable to complete the new track at Quyon and that meant we would have no place to race.

1977 would turn us into a group of vagabond racers — touring Montreal, Picton, and other destinations to get our racing fix. We’d be up against the big boys with each new race…

Probably the most difficult thing about writing these posts is remembering enough detail about what happened 40-odd years ago.  In this, I’ve been helped by Fred Zufelt — we talk through what we remember, compare it to the photographs we have, and figure it out from there.  He has memories that I don’t remember and I have some that he’s long forgotten.  So a big thanks to Fred!