Home My racing life Playing with the big boys 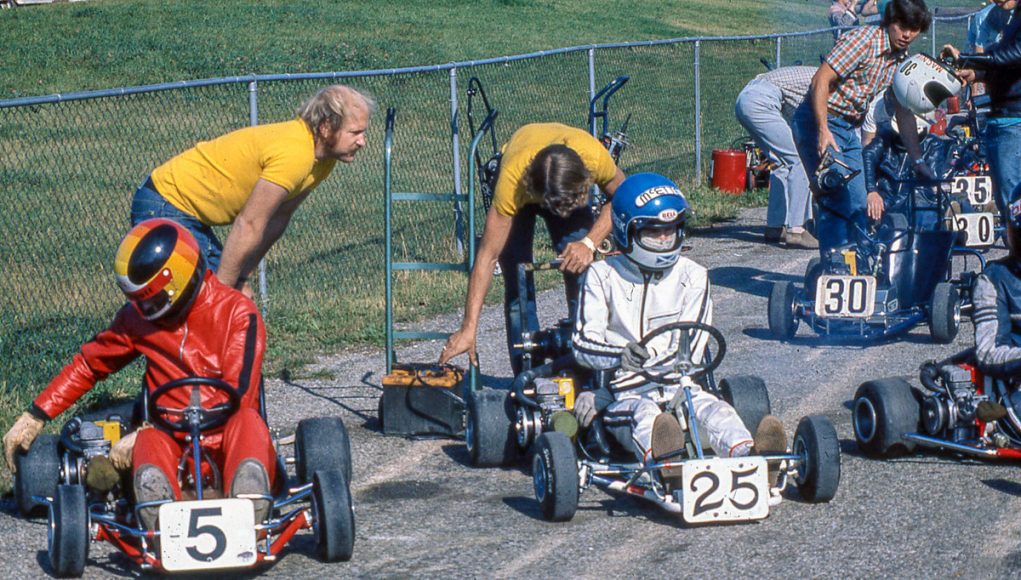 September 19, 1976 — By the time I was 20 years old, I already knew I was late getting into the game of being a racing driver. Other successful drivers typically got started much younger.

But I’d just finished my first full season of racing karts on the Capital City Speedway oval and now our local kart shop, McEtte, was offering to run Dave Elliott and I under their name for one event at a big-time kart track near Toronto called Goodwood.

To others it might have been small potatoes, but to me this was heady stuff!

During the previous year, McEtte owners Al McRory and Paul Joinette had brought karting back to Ottawa by opening their kart supply shop for local enthusiasts. I’d bought my Margay Panther and McCulloch 92 engine from them early in 1976.

Al and Paul were also heavily involved with organizing the local club, the Ottawa-Hull Kart and Recreation Club (OHKRC), along with Fred Russell, Aline McRory, and several others. In addition to getting us started at Capital City Speedway, they also planned to build a new track on land they’d acquired near the small town of Quyon, on the Quebec side of the Ottawa River.

As I’ve mentioned in other blog entries, OHKRC only allowed dry clutches and box mufflers to keep the cost of karting down.  But in order to run at Goodwood, we’d need the more expensive tuned exhaust pipe and an oil clutch. Fortunately my wife at the time, Niki, was still excited about karting so I got to buy the equipment and we agreed to go.

Both types of clutches work on the same principle: the faster the engine crankshaft rotates, the more the sprung weights expand inside the clutch drum and engage to provide a positive drive to the rear wheels.  The difference between the two was that the oil clutch was sealed and filled with oil, which kept the components inside cooler. You could also adjust the clutch engagement point, so it took a bit of learning to get used to.

The tuned exhaust pipe, on the other hand, came completely assembled and finished and the only adjustment we could make was deciding on the length of flex pipe between the exhaust header on the engine and the start of the exhaust pipe. This is probably just as well because we knew nothing about tuned pipes and how they work. We just had to cut it to the length the pipe manufacturer advised and hope for the best.

Nowadays, a driver can go to YouTube for video lessons like this one and learn all about such things quickly. But in the ’70s, that kind of information was not easily available without going to the library or to an engine shop and doing lots of reading.

Setting out for Goodwood, we followed Paul and Jeanne but got separated and lost on the way there. (This WAS before cell phones and about one year before the CB craze.) It was getting dark and we decided to find a hotel for the night and continue to the track in the morning.

That was a good choice. Not only did I get a good night’s sleep but, the following day when we turned the final corner and saw the track for the first time, it was bathed in that misty morning light and beckoned to me for an exciting weekend ahead.

Having only raced my kart on an oval with pylons marking out the corners, the width of the track and the finish of the grounds were the first things that struck me. It looked very fast with long straights and wide turns.

The Petti family owned the track and Mr Petti (Mario snr.) and his wife and daughter Marina ran the rental business. His son, Mario, ran the racing business and was the Canadian importer of Italian IAME karting equipment including the Birel brand that Jon Snadden had brought to race at Capital City.

Dave, too, had recently upgraded from his Margay to a Birel. Dave was a tall boy and was squeezed pretty tightly in the small kart. He was still sitting up pretty straight as you can see in the pictures.

Paul acted as my mechanic for the weekend and Al supported (or “wrenched” as the karters said) for Dave. Jeanne took our times during practice. Our times weren’t far off the regulars — they lapped close to 45 seconds a lap and my best time (in the third heat) was 46 seconds flat.

We kept a spec sheet on kart adjustments so we’d have that as a starting point the next time we were there. It shows that I crashed out of the first heat, scored 7th after avoiding someone else’s accident in the opening laps of the second heat, and set my personal best time in the third heat even though I didn’t record where I finished… :/

There was a lot to learn and it was a tremendous load of fun. I was right that the track was fast – the straights were long and the corners quick and the throttles were wide open a lot of the time.

Looking at the picture of the start, I can see now that a couple of friends that I wouldn’t get to know until several years later were actually in that race : TJ Dersch (#24) and Matt Haney (further back with the Emerson Fittipaldi-colored helmet).

I learned a lot during the weekend as the other drivers were generous with their knowledge and experience.

Mind you, I WAS a little afraid when one fellow started tearing at the air filter on my carburetor. But he explained that by sticking my finger through the hole and covering the jet that brings fuel to the engine, I could keep the mixture lean at the start and get more power when the flag fell. I didn’t get it completely right the first time, but it did make a significant difference.

I also learned that many of the other drivers were using alcohol fuels, which gave their engines a bit more power. I didn’t try to find out too much about them as there was already enough to learn; trying to absorb new information about exotic fuels was going to be too much. Besides, we couldn’t use those fuels in Ottawa so it would be knowledge that wouldn’t yield any useful return back home.

After the race, standing exhausted in the line up waiting to be weighed (yes, there was a weight limit for the kart plus driver) I heard an older driver behind me, looking equally worn out and a little forlorn, lament to no one in particular: “I bet I’m the only guy here using straight gasoline.”.

With youthful exuberance and a broad smile, I quickly volunteered “I am too!” I don’t think that’s exactly what he had wanted to hear…

Epilogue: After that race and before the end of the year, I spent an evening at Jon’s house learning to disassemble my motor, ensuring that the components were in good shape for the next race, and then reassembling it.

For some reason, our wives weren’t as excited as we were about using kitchen appliances as engine tools…

It was the first time I’d opened my engine up and I was horrified to find that the machinist at McCulloch who had milled the engine block had completely botched the job.

The passageway from the crankcase to the cylinder (called the transfer port) is supposed to be nice and smooth, almost polished, to let the fuel mixture flow properly and quickly into the cylinder. My transfer port was anything but smooth: it looked like the machinist had set up the machine to drill the three inlet ports in the wrong place and then left for coffee!

The drill had started to bore the inlet ports in the middle of the transfer port, instead of the correct location up above. He’d obviously recognized his mistake and reset and tried again, but it left three half-bored holes to totally disrupt the flow — the fuel mixture could not have been flowing properly and fully into the piston chamber.

It was both maddening and exciting: maddening that something like this had happened and that McCulloch had sold the engine anyway, but exciting in that I might get some extra speed out of the engine when I got it fixed!

That winter, Paul and I made a run to Winners’ Circle kart shops in Toronto (in the middle of a blizzard, which is another story all by itself) to pick up the new block. I reassembled the engine and waited impatiently for the 1977 season to start.

Read the next installment of the karting series: “Hello faster kart; goodbye track“