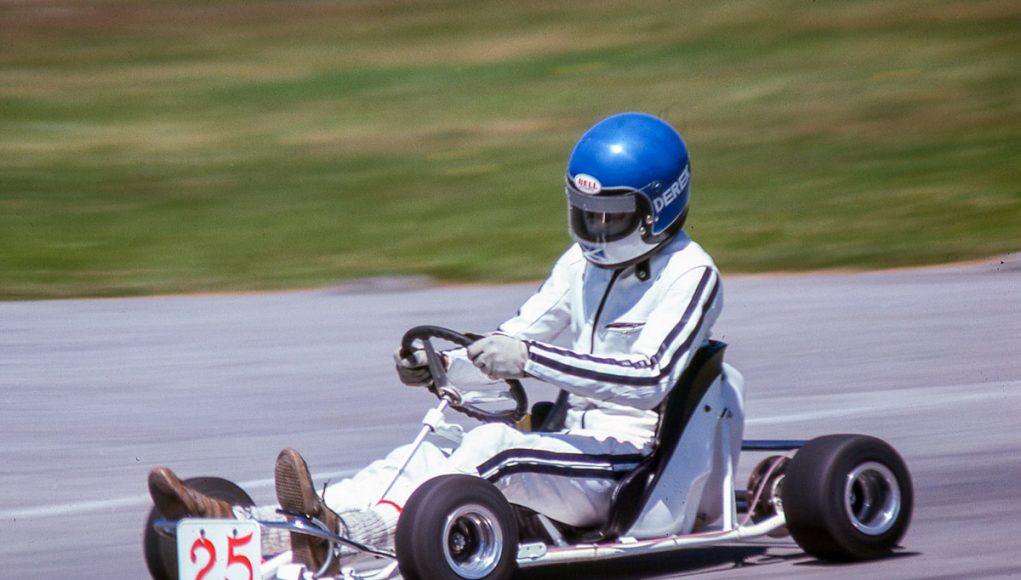 After completing the Jim Russell school in the summer of 1975, my attention turned to college — but I was still so fixated on getting into karts that some of my classmates suggested I should quit college and go racing instead. If only…

But I was in my last year and I would graduate in April, ’76 — God willing!

Although I couldn’t afford a kart right away, I could get everything else ready.

Good protective gear was important to me and I already had my Bell full-face helmet painted up with my colors, partially inspired by F1 driver Pedro Rodriguez. (Now that I’m older and presumably wiser in the 21st century, I now know that was my “brand”).

That winter, while visiting family in Scotland, my grandfather helped me order custom full-length leathers from a shop in Britain and arranged delivery in Canada.  I decided to make them look somewhat like a driving suit of the day and ordered them in white with two blue stripes running down the arms and legs.

This may seem unremarkable, but if you consider that most karters of the day raced with black motorcycle leather jackets and jeans, you’ll understand how I stood out like a sore thumb.

I also departed from tradition by putting my FIRST name on everything — the sides of my helmet and on the back of my leathers. If other drivers put their name on anything, it was typically their last name. It just seemed more friendly to me.

This idea had a totally unintended effect: at races, people would come up to me and say “Hi Derek” when I didn’t know them at all or didn’t remember their name — AWK-WARD!  However it opened some doors as shy me would have not gone out of my way to introduce myself.

Why did we need leathers, I hear you ask?

In the event of an karting accident, the driver needed to be thrown clear of the kart (similar to a motorcycle) because there was no roll cage and no seatbelts. Being strapped in to such a small vehicle with an unprotected driver compartment could certainly lead to a bad injury. The tough leather protected your skin and flesh from severe scrapes if you were thrown across the asphalt track.

With college behind me and with all this gear now in hand, it was a matter of finding a job and making some money to buy my kart.  I landed a second-shift job in a small computer room at Bell-Northern Research, where I’d worked for the past two summers. Finally I had some money to spend on racing.

When the big day came, I picked up my Margay Panther and 92cc two-stroke McCulloch 92 engine (McCulloch had adapted it from their chain saw product) from Paul Joinette and Al McRory of McEtte Enterprises.

The Panther was a straightforward design, with a sit-upright seat, the engine mounted beside your right hip, right-foot gas and left-foot brake, single speed forward, single hydraulic disk brake on the rear axle, and the gas tank mounted on the back of the seat.

The first thing I did was take it home, tear it down, re-assemble it and replaced any suspect parts.  I painted it white and gave it blue and red diagonal stripes like the car I used at Jim Russell Racing School and the Hesketh F1 team (remember this WAS 1976…).

Between the kart and the leathers and helmet, I had a good-looking and promotable package.  Now I just needed to find some speed and prove I could do it.

So here I was, finally — I was about to start my first competition in my own racing machine. It was an auspicious moment.

1976, Capital City Speedway — Drivers’ meeting of the Ottawa-Hull Kart and Recreation Club. I don’t remember a lot of the names (so please chime in if you can help), but from L to R: Gilles Carrier, ?, Paul Longchamps, Phil Tughan, Dave Elliot, Jim Bolton, Fred Russell, ?, ?, Derek Cadzow, Jane Murray (Wagner), Bill Hiscock, Ken Mair in the yellow shirt, and Paul Joinette (with back to camera). — at Capital City Speedway.

But — horrors — I wasn’t that quick. In spite of all my preparation I regularly watched fellow drivers Jeanne Joinette and Jane Wagner drive away into the distance.

It took a few months, but I finally did start to get quicker — at least quick enough to tangle with Jane at the first corner. We locked wheels and my kart and I were flung up in the air. Fortunately there was nothing damaged but my pride. Of course, this particular weekend was the one my Mom came out to see what all this racing was all about…

My Mom was actually pretty good about supporting me. In fact, she’d often help me lug the hundred-or-so pounds of kart and engine up and down our basement steps after it’s in-between-race rebuilds and then across the lawn to the car. You can’t ask for much better support than that.

Ottawa Journal writer Ron Woltman came out one weekend and wrote a piece about our “buzz-bomb” go-karts (yes, I still have a copy) and how the rest of us in the lightweight class had to chase Jeanne and Jane. He also wrote about Dave Elliott (of slot car and RC car fame) and Phil Tughan in the heavyweight class. It was exciting to see our races and our names mentioned in the paper.

As you can read in the article, Jon Snadden had also started racing with us that summer. He’d turned up with black full-length leathers and an Italian kart (Birel) which, unlike to our sit-up-straight karts, had a semi-reclined driving position and it looked much more racey than ours. Jon was very quick almost immediately.

So much so that, during the winter, I planned to take a hacksaw and welder to my kart and make it look a lot like his before the next season got started!

But first, I needed to get more track time under my belt and there was one more major event to come, surprisingly, before the year was over…

Read the next installment in this series: Playing with the big boys