Home My racing life Kart racing returns to the capital 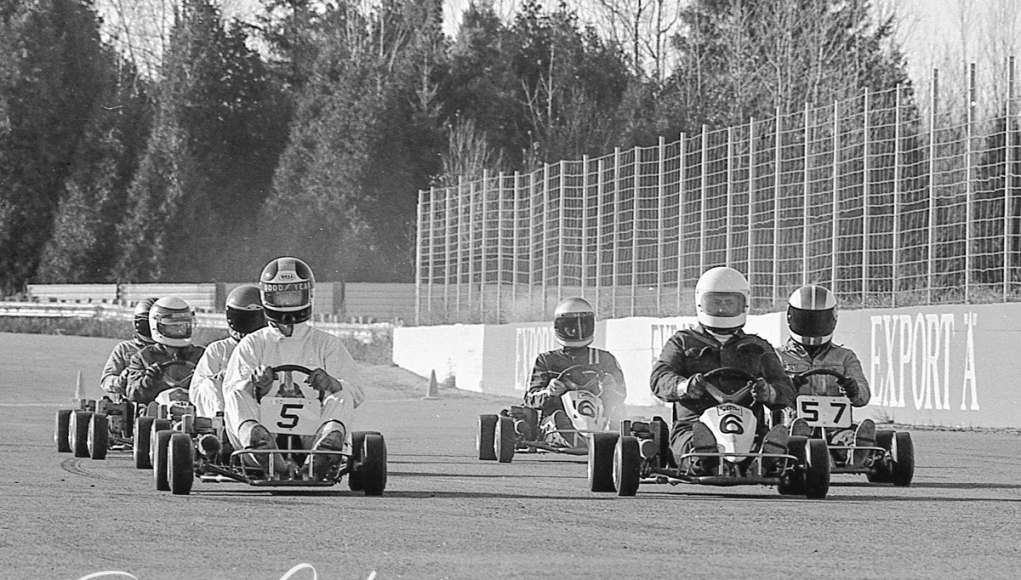 A friend recently described a photograph as a return ticket to a moment otherwise gone.

When I posted several photos of karting days-gone-by on Facebook a few months back, many long-lost former colleagues and competitors suddenly appeared to comment and respond.  Clearly, getting a “return ticket” was important to more people than I had thought — so I promised I’d scan more and post them somewhere for all to see.

That’s how this blog series came to be. I’ll be posting photos from my years in karting (and a few years beyond that) along with as many memories that my aging brain can muster.

Rumor has it that karting began in the Ottawa, Canada, area in the 1960s.  I’m sure that’s true as the new craze was sweeping the continent around that time, but I can find no details.  But certainly I couldn’t remember any local karting except for the very small rental track called Pineland near the airport.

The modern Ottawa kart racing era began late in 1975 at a track called Capital City Speedway, just to the west of the city on Hwy 7.

The resurgence was largely due to Paul Joinette (later of Karters Korners fame) and Al McRory.  They opened a kart shop on Richmond Road called McEtte Enterprises and encouraged the formation of the Ottawa-Hull Kart and Recreation Club (OHKRC) and supplied members with karts and engines.  The club had plans for social events as well as competitions.

To try and keep costs down they mandated the use of a box muffler instead of the more expensive tuned pipe, a “dry” clutch (no oil), and relatively hard, longer-wearing Goodyear tires.

Keep in mind that these are not the kind of karts you rent at your local kart track. They’re light and they’re fast.

The club variety gives you about one horsepower for every 20 pounds of kart and driver. At a club event in 1980, a police radar caught the race leader at 84 mph at the end of the straightaway.

The national/international varieties give you about one horsepower for every 10 pounds and are said to do well over 100 mph. Many past and present F1 drivers had their start in karts.

One of the club’s goals was to raise funds to build a kart track at Quyon, just across the provincial border on the Quebec side.  It was to be a smaller version of the Grand Prix track at Mt. Tremblant (the same one I drove on at the Jim Russell school). It would replicate the many elevation changes of the full-size circuit making it unique among kart tracks — most of which were very flat.

The group already had the land and the track was graded with gravel, now they just needed to pave it.

Until that was done, the group needed a place to race and that turned out to be Capital City. By setting up small pylons on the straights they created a road course with tighter turns, a long-ish straight, and used the big curves of the oval for an exciting and varied course.

Want to own prints of these pictures? Check out our gallery.

Fred Zufelt and Dave Elliott (from slot car and radio-controlled car days) were there for the first races on a chilly September day. Fred remembers this because his kart was a wedding gift from new bride Elaine. Other drivers in those early races included Al McRory, Paul Joinette, Phil Tughan, Jane Wagner, Jim Bolton, Gilles Carriere, and Fred Russell.

At that time, I was still a Journalism college student and the best I could do was show up with a camera, not a kart, to indulge my passion for racing and for what I hoped I’d be doing soon myself.

I had a soft spot for this track. It was the place where, several years before, I had my first-ever spin in my road car, a Volkswagen 1600 fastback, trying to chase my friend David in his Austin-Healey Sprite around the oval.

Thanks to Fred, I did manage to squeeze in a run in his kart. It was fast and the two-stroke engine gave your backside a good kick when you pressed the throttle.  It handled well and you could fling it around with wild abandon — even though I already knew that wasn’t the fastest way to drive.

That was the ride that settled it — this is what I wanted to do.  It was now my mission to get equipment and get ready.

Coming soon: Getting my feet wet in buzz-bomb karts