Home My racing life Ice racing and slaloming – and a championship! 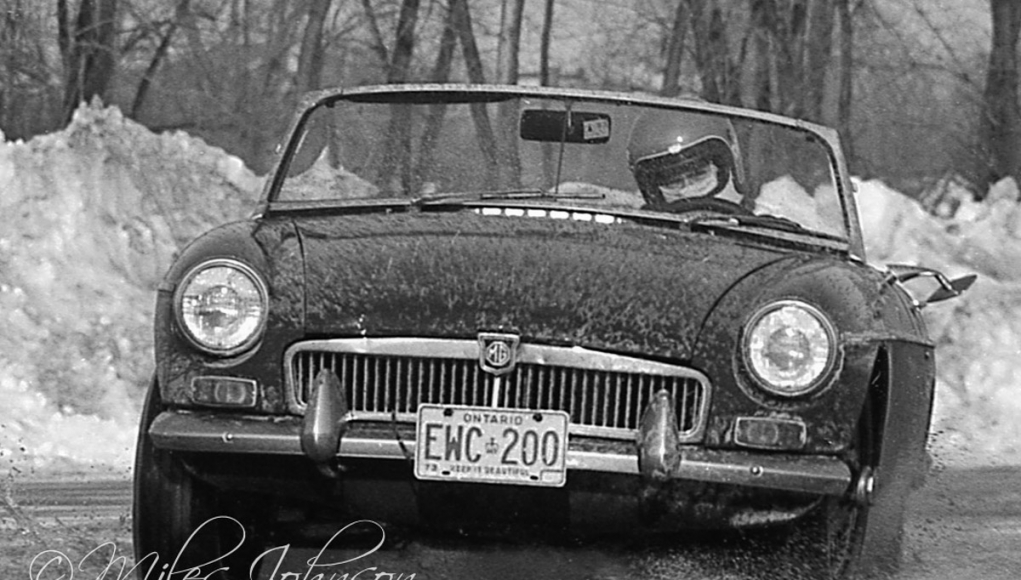 One of a series of posts about the racing antics we got up to before arriving in competitive karting. Check the overview for links to other posts in the series.

If you spend time in Canada, sooner or later you’ll drive on snow and ice.  It’s just part of being Canadian.

And if you’re a Canadian trying to get your butt in the seat of a racing car, it might naturally follow that you’ll end up racing on snow and ice.

The Canadian winter arrived shortly after getting the car, so it was ice racing first.

I’d attended a couple of ice races with Scott MacKenzie the year before: a race in Ontario where I spent my 18th birthday ankle deep in water as the ice seemed to be melting around us, and later at Dow’s lake for a race that was part of the Ottawa Winter Carnival (video).

An ice race is held on frozen lake. The track is constructed by plowing away the snow to make a very slippery race course.

There are three ways to go ice racing:

Driving rather than watching was going to be a whole new experience. I finally had my butt in the seat of something I was going to race.

Early in 1975, I drove 30 miles or so to St. Pierre de Wakefield in Quebec for an event at Lac St. Pierre.  The local folks were very accommodating as the racing drew crowds to the small town and gave the economy a bit of a boost.  The Hotel Sur le Lac became race headquarters.

Car racing on the ice at St. Pierre-de-Wakefield in the late ’70s or early ’80s. (I need a credit for this photographer).

The Ice Dice was the attractive option for me because there was not much to hit except a snowbank if you spun the car. Given that my MGB was my daily driver, I figured that the Ice Dice would keep me out of unrecoverable trouble.

Before my runs, (we were allowed three each) I watched other cars on the track for clues on how to lap quickly. Another MG on the track, a hard-topped MGB-GT, overcooked it on one corner so badly that his car came to rest a full 50 feet (!!!) on the other side of the snowbank that defined the track edge. Organizers had to use a tow-truck to winch him back onto the track surface. This was a good clue about what NOT to do.

My turn came and out I went. Sliding around the track and trying to be as fast as possible without spinning and losing time was loads of fun.

After the last driver had taken his turn I got permission to go back out and do a few more practice laps. After a lap or two, I noticed other cars coming onto the track.  It was the rubber-to-ice class warming up for it’s race!

My competitive nature got the better of me and I stayed out with them for a few more laps.  It was fun… I even managed to pass one of them going into the first corner (although they probably weren’t trying hard since it was a warm up).

Slaloming: Racing against the clock on asphalt

Later in February, the Canadian winter relented for a few days and the temperature shot up to a balmy +12 C (about 45 F). Any convertible driver worth his salt would take down the roof in such weather and I was no exception. Even though I still had to wear my winter jacket and a toque, the roof did indeed come down.

Held in a Carleton University parking lot, it was icy in the morning and then melting slush as the day went on.  It made for some interesting driving as you’d alternatively have traction and then no traction. The idea of a slalom is to get round the pylons without missing a gate or knocking one over in the least amount of time. The quickest time wins.

Nigel Mortimer was there in his Lotus Elan. There were also three entries driving the new Honda Civic with that new-fangled front-wheel drive — it really helped in the slippery conditions.

After three runs each in which the times went back and forth due to the melting slush, Nigel came first, a Honda was second, and I finished third (then two more Hondas and everyone else).

A good friend from work, Miles Johnston, came to watch and I lent him my camera.  That was HIS defining moment — he did a great job as you can see from the pictures and caught the photography bug big time!

As winter subsided, the motorsport club held their summer series and I competed hard in the D/stock class, which meant no real modifications to the car and the mandatory use of regular street tires. The competitions were held at the Sears parking lot at the St. Laurent shopping center.

Lots of interesting cars emerged from their winter hiding places, including a very unusual Ford Anglia 105E (shown below) known as the “sidewinder” (see comment left by bobinott below), which had it’s 4-cyl 1600 pushrod engine sitting in the passenger seat. Owned and built by Rex Wallis and mostly driven by Bob McLeod, it was very quick indeed.

Particular memories from that series:

My 1969 British-Racing-Green-and-Rust colored MGB with the wire wheels painted flat black because they were rusty too!

In the end, I won the D/stock slalom championship that year, a feat heavily influenced by the fact that I was one of the few that turned up to all the events! Nevertheless I was proud of my little trophy and I still have it (somewhere around here) to this day.

All this just reinforced to me that being the one in the seat of the racing car was a lot better than watching or trying to drive model cars.

Many years later I took my Miata slaloming in North Carolina with the Tar Heel sports car club. In this neck of the woods, they don’t just drive around pylons in a shopping center parking lot — they use old disused airports for an autocross course. You can get up a pretty good head of steam when autocrossing on runways. Jackie also gave it a go in her Miata too and it was a tremendous amount of fun.

Read the next installment in the series: The best $1200 I ever spent.