Home My racing life Radio-controlled racing cars and … a curb 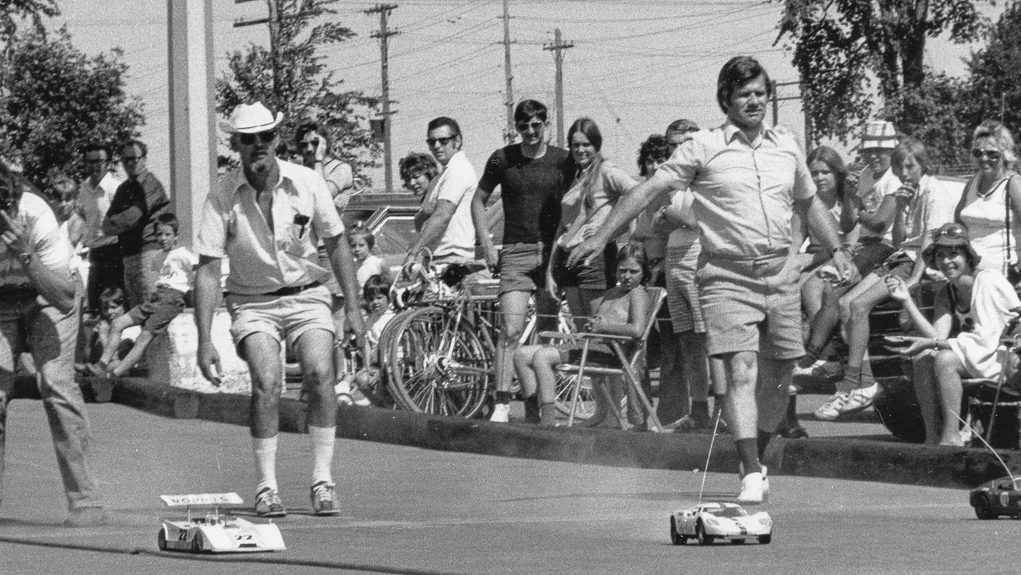 One of a series of posts about the racing antics we got up to before arriving in competitive karting. Check the overview for links to other posts in the series.

My eye-hand coordination with radio-controlled racing cars was not something to brag about.

Technically speaking, 1970s RC cars were interesting – they had tiny two-stroke gasoline engines (we used one called a Veco .19), fuel system plumbing, and a kind of suspension and steering gear.  That part I could deal with and was fun.

On the other hand there was lots of electronics in the radio control systems, which was something totally new to me. Back then, you would buy your radio gear as a kit from companies such as Heathkit and assemble them yourself.

It was like buying furniture from Ikea: lots of pieces and often-unfathomable instructions.

Normally, I could solder a brass-and-steel slot car together with no problems. But soldering electrical connections was a whole new ball game — after I’d finished assembling my radio transmitter Fred Zufelt, who was much more experienced in electronics than I, had to pull it all apart and re-solder it all so it would actually work!

In late 1972, my best-friend David Sampson and I tagged along with Fred and Dave Elliott to an radio-controlled car race at Ottawa’s Museum of Science and Technology. The RC club had commandeered the parking lot (with the Museum’s permission of course) and created the outline of a track with great lengths of garden hose.

Fred and Dave were already heavily involved in the sport and knew what they were doing. We were just learning.

That day, Ottawa Citizen reporter Jim Blackman arrived to do a story on the miniature cars (yes, I still have a copy). I ended up in a newspaper photograph as the flagman…

So, in 1973 we were both excited and ready to graduate from slot cars to radio-controlled racing cars, and we bought ours (previously enjoyed) from Fred and Dave. Mine was from Dave: a beautifully-crafted Heathkit model (1:8 scale) of Mark Donohue’s 1968 Sunoco CanAm McLaren sports car. Dave always did a spectacular job of modeling.

The two-stroke engines made the little cars go very fast — I’d guess they could quickly reach 50 miles an hour or more.

They were supposedly fast enough that aerodynamics would come into play and many had big wings on the back.  Aero was a new and interesting thing in all facets of motor racing at the time and it would have been fun to try out different aerodynamic ideas..

Somehow my brain just wouldn’t connect those things and I banged up one or two times against parking lot curbing.

Driving it on an oval was OK. One night, David and I drove our cars around the teacher’s parking lot after school when everyone had gone.  The car only had to turn left for the entire lap and my mind had enough time to think about which way to push the joystick on both ends of the circle. That was easy enough and the sound of the cars echoing off the school walls was pretty neat.

Driving it on a road course was another matter entirely. I had to think about whether the car was coming or going AND which direction the corner was going — left or right. And there wasn’t much time between one corner and the next to figure it out.  My poor little old brain just wasn’t up to the challenge.

Late that year, David and I competed in a RC car race in a Hull, Quebec shopping mall, across the river from Ottawa. We were both also-rans (the racing term for someone in the race but not at the front of the pack). I recall we both had technical troubles and didn’t finish the race.  My Aunt Margaret who was visiting from Scotland was there as was my Dad taking these pictures for posterity. Our good friend Marijke can be seen sitting on the back of my Volkswagen and she took the majority of this Super8 movie of the race.

For my second season of radio-controlled racing cars in 1974 (I don’t give up easily), I built my own car: the Mark Donohue L&M Porsche CanAm car.

Having limited fabrication facilities, I made the chassis out of aluminum sheet which made it light but also a bit fragile. The Porsche’s body was made of lexan, a kind of plastic that is supposed to be bullet-proof.  And I went to town with the modelling — a beautiful paint job and it looked just like the real thing in 1:8 scale.  I was so proud…

But my directional difficulties came into play in one abrupt, funny and frustrating moment:  in the middle of a race I misjudged which direction to turn the car and it plowed headlong into a concrete curb.

The result was that the aluminum pan bent into a semi-circle leaving the car looking rather like a crescent moon.  The Lexan bullet-proof body was intact, but on impact 90 percent of the paint flew off in an explosive cloud of paint flakes leaving just the largely-transparent lexan body shell.  (No film of that, unfortunately.)

That was pretty much the point at which I decided I needed to get my butt in the driver’s seat — then there would be no question which way the vehicle would go when I turned the steering wheel!

My focus quickly turned to racing a two-stroke kart as a quick way to get into real competition.

Read the next installment in the series: Finally, a taste of real racing.