Home Cars Tales of the Golden Beetle: fire and snow 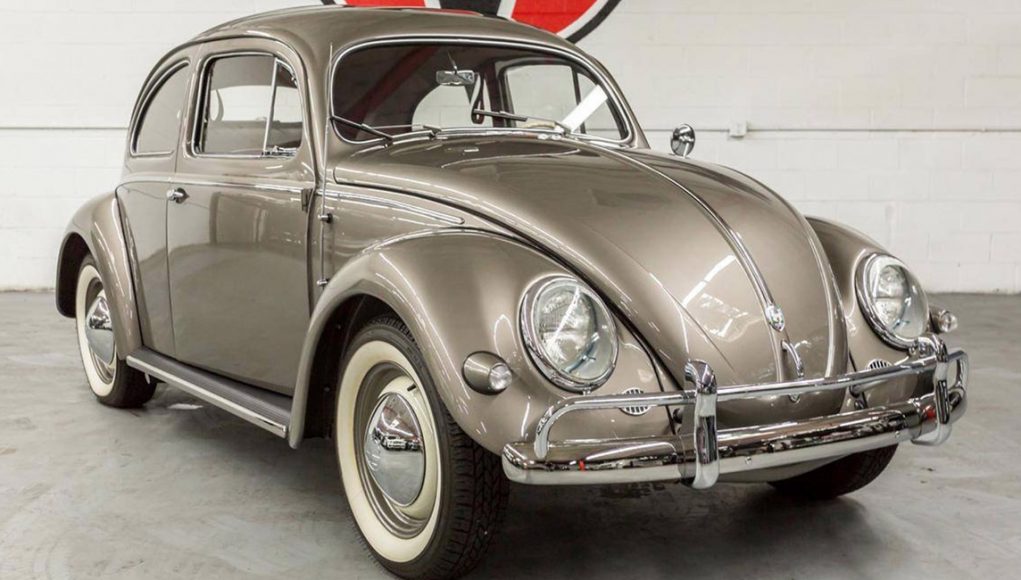 (image above: this is not David’s beetle, but it is the same year and looks the same except for the paint. David’s was more of a “spray bomb gold” — so not quite as clean as this one. Sadly, no photos exist of the mythical Golden Beetle…)

David was constantly doing something to his 1956 Golden Beetle at any time of the year. One bright, cold winter morning I found him underneath his car in his Dad’s snowy driveway. I called to him: “What are you doing down there?”

“Changing the oil, of course!” came the muffled reply. I walked away both astonished and amused — what do you say to that? I certainly wasn’t going to stand around in the cold watching his feet…

But from many such projects over the years, David learned to completely restore older vehicles and has become a renowned specialty-auto appraiser.

Volkswagens were a starter car for many of us in the ’70s. They were simple enough to work on and inexpensive. But they could also be testy and driving one was certainly a unique experience.

As a rule, they didn’t have much power. David says that neither his Golden Beetle or my VW 1600 Fastback probably had much more than 35 horsepower at the rear wheels. This is likely true as it often seemed like you had an on-off switch under your right foot instead of a throttle — what power there was, was either there or it was not.

VW’s road handling was heavily influenced by having the engine at the back of the car. Sometimes having the engine weight over the drive wheels is a good thing, especially in snow as it gives you more traction when and where you need it. But when the back end of a rear-engine car decides to slide, there’s no stopping it. Once it starts, the momentum of all that weight back there keeps the slide going… and going.

My very first spin in a car happened while chasing David’s Austin Healey Sprite (his post-Golden Beetle car) around the Capital City Speedway quarter-mile oval just outside Ottawa. The back end of my VW 1600 just suddenly snapped loose. One second I was nicely drifting around the 180-degree corner; the next second I was looking at the infield grass out of my front windshield, then the track behind me, and then the guardrail on the outside of the track… an unpleasant and embarrassing experience.

I didn’t get to have all the fun, of course. You may recall David’s closing question in the last post: “Do you remember doing a donut in my bug just in front of an oncoming cement truck with a full load of friends on board?”

Yes David, I certainly do.

One rainy afternoon the Golden Beetle, with David, me, and our slot-car and RC-car friends Dave Elliott and Fred Zufelt onboard, decided to do a slow, lazy spin at about 45 mph on a shallow, wet corner. Although I had the utmost confidence in David’s ability to drive through the skid, I WAS concerned about the cement truck coming at us on the other side of the road. I vividly remember Fred and I in the back seat looking through the side window at this massive truck bearing down on us.

Fortunately the little car did a complete 360: that is, it went all the way around once and ended with the front of the car facing the right direction again. Then, David just jammed it back into gear and kept going past the truck like nothing had happened. I’m sure the trucker’s heart was beating as fast as ours (or it had stopped!).

In the last post, we learned (the hard way) that the 1956 VW had a positive ground electrical system with a six-volt battery.  Six volt batteries might be OK during German winters but bitter-cold Canadian winters sometimes brought them to their knees. So one of David’s next projects was replacing the six-volt battery with a 12-volt one.

The new battery was a bit taller, but still fit snugly under the seat with the plastic, rubber, and metal cap. We expected this would be a big boon in the colder weather.

At the beginning of 1973, David and I worked at the McDonalds in Bell’s Corners, just outside of Ottawa.  We’d finished our shifts one bright sunny winter afternoon and were set to go home. A couple of young ladies finished at the same time and we offered them a lift. David drove, I was in the front passenger seat, and the young ladies were in the back.

It was cold (hey, it’s winter in Canada!) but the sun was bright, the salt on the road was melting the snow and ice, and the snowbanks piled high at the side of the road were bright white.  Our usual frosty windows were not such a problem in the sunny afternoon as they were during our morning drives to school.

As we drove down the main road, I began to see smoke drifting forward from the back.

But then I started to see small black things floating in the smoke.

Senses suddenly heightened, I thought: “Oh-oh, that’s not from cigarettes.”

“David, pull over — we’re on fire!” (I’m sure there was a bad word in there somewhere.)

In a flash, David stopped at the side of the road. I jumped out and tilted my front seat forward. The young ladies bailed out quickly and stood to one side…  at a discrete distance.

I yanked the back bench seat off it’s frame and pulled it through the door. The insulating material on the bottom of the seat was already in flames, so I promptly threw it onto the snowbank.

David was already in the back from the other side. The battery’s insulating rubber mat was also on fire. He pulled the metal cap off the battery and threw the flaming rubber onto the snowbank too. (Canadian snowbanks are really handy in the event of fire…)

Now that the car was clear of things on fire, I turned back and threw snow on the seat’s flames. More snow on the rubber mat made short work of that fire too. Everything was quickly under control and we breathed a sigh of relief.

David says he thinks the weight of the ladies on the back seat pushed the springs onto the metal cap on the taller 12-volt battery, pushing the rubber mat to one side.  As soon as the terminal shorted on the metal cap, he reckons the rubber caught fire and then ignited the seat stuffing above it.

Now that the emergency was over, we were just standing about on the side of a busy road with bits of Volkswagen all around us.

David put what was left of the rubber mat over the battery and sealed the metal cap carefully over it.  I cleaned off the back seat, wiped the water and snow off of it, and placed it back over the battery to reassemble the seat.

I held the door open and pulled the front seat forward for the young ladies.

They both looked at me in disbelief. “We’re not getting back in THAT car,” they asserted.

“What?” I looked at them — it was a cold walk home in winter weather.

“We’d rather walk than drive in THAT car again.”

“Are you sure?” I asked.  There was no doubt about their answer.

It would be futile to try and convince them that the car would be OK and I kind of understood their position. But, personally, I wasn’t going to walk or wait for a tow truck when this perfectly good car would get us home in a few minutes.  And I had no doubt that David felt the same way.

We bid the ladies goodbye and, I guess, they walked. (They weren’t that far from their homes and as Canadians they were dressed for the winter… so there was no danger.)

It wasn’t the first time, or the last, that our car maintenance attempts ended in a good and slightly embarrassing story. Perhaps there’ll be more of those in the next installment of Tales of the Golden Beetle.