Home Cars Tales of the Golden Beetle: the little engine that could 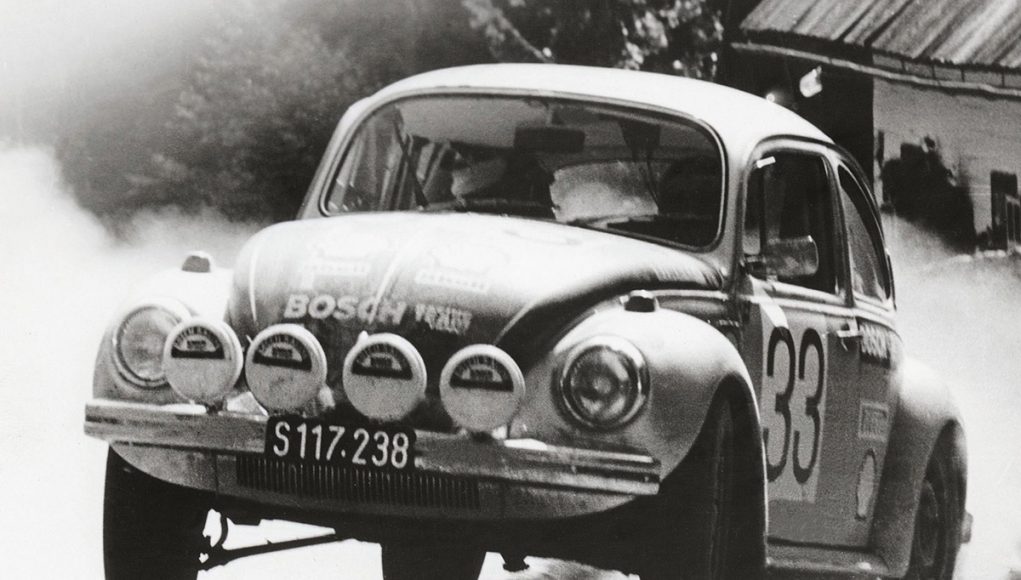 (image above: this is not David’s beetle (nor my photo), but I imagine that his looked much the same in terms of “attitude” as he drove it on gravel roads during the MCO rally. Well, except for all the lights — we just had the regular headlights and a small dent in the front after it was all over! Sadly, no photos exist of the mythical Golden Beetle…)

As you’ve no doubt realized from other posts in this blog, if there was a working vehicle of any kind available to David and I, we were going to find a way to race it.

The Motorsport Club of Ottawa was holding a 100-mile rally on the country roads around Ottawa. So, of course, we entered. Did we know anything about rallying? — no. But that wasn’t going to stop us.

Since it was David’s car, he drove. I was the “navigator” in the passenger seat.

As it turned out, my real job was to figure out what the rather cryptic instructions meant. We’d never been in a rally before and we had only a vague idea of what to do.

(These are the actual instructions we got that day. Yes, I still have them…)

During the first section, I realized we needed a watch with a second hand. Did we have one? No, of course not.

I learned that we had to maintain an average speed between checkpoints and that we needed to use the watch and the instructions to determine what the average speed should be. We had to arrive in the right amount of time — no earlier or no later than the target.

Thankfully, someone took pity on us and lent us a watch before we set off on the next section.

With that sorted out we were on our way again. But I noticed that the oil pressure light was blaring on the dashboard. David said it had been lit the whole time!

He didn’t care about that, he said, because he’d arranged to have the engine swapped for a new one by some moonlighting VW mechanics the following day.

I cared a little bit — I was thinking about having to wait ages for a tow truck to take us home from out in the boonies. But even though the oil light glared at us for the entire 100-mile event, the little VW engine just kept thumping along!

The next sections were mostly gravel roads. While David kept the car on the road, I compared the map to the rally instructions to determine where to turn next and how fast to go. We were getting the hang of this rally thing.

But then I looked up from the map and saw that we were flying off the gravel road directly at a wooden ranch-style fence!

Two seconds later the front of the car was sitting on top of the fence and the exhaust pipes were squarely submerged in the mud.

We looked at each other and David uttered the classic words that we’ve repeated often over the intervening in 48 years:

Our salvation was that the 1956 VW was built like a tank. The body metal in those days was so thick that there was only a minor dent in the fender.

So with the help of some fellow competitors who’d stopped their pickup to help (yes, they were driving a pickup in the rally), we climbed the fence, picked up the front of the car and dropped it to the ground, cleaned the mud out of the exhaust pipes, and continued on our way.

The rest of the rally proceeded without further incident in spite of the perpetually bright oil light.  Amazingly, I think we finished third — a totally unexpected and a pleasant surprise.

The next evening we drove our little rally beetle (with the oil light still shining brightly) over to the moonlighting mechanics home.  There were four of them and they directed us to back the beetle into their garage.

They got to work right away.

Then his friends lifted the car and pulled him out by his ankles with the engine still sitting on his stomach! I couldn’t believe it…

They reversed the process to get the new engine in and it was all done in an incredibly short time.

A few days later they’d had a good look at the old engine and reported that in addition to very low oil pressure, it had only been firing on two out of four cylinders — and both of those on the same side of the flat-four engine!

How that car made it through a 100-mile rally I’ll never know, but it seemed to persevere through just about anything.

From what I remember, David bought the Golden Beetle in 1972 shortly after turning 16 and getting his driver’s license. By September of 1973, he and his family moved to Alberta from Ontario. He’d had his black Austin Healey Sprite for a while before that. So as unbelievable as it seems, all the adventures we had with the Golden Beetle happened in less than a year.

Those were golden years: when the whole world lay before us, life was an open book, my eyes still saw things sharply without glasses, and politics and social security weren’t even a blip on my radar.

The Golden Beetle was a symbol of that time: new mobility, endless possibilities and adventure, and nowhere to go but up.

And to think, we don’t have ONE picture of the golden beast! But it left it’s mark and its image is clearly stamped on my memory. Too bad those times have to end. Such a shame…

Tales of the Golden Beetle: fire and snow