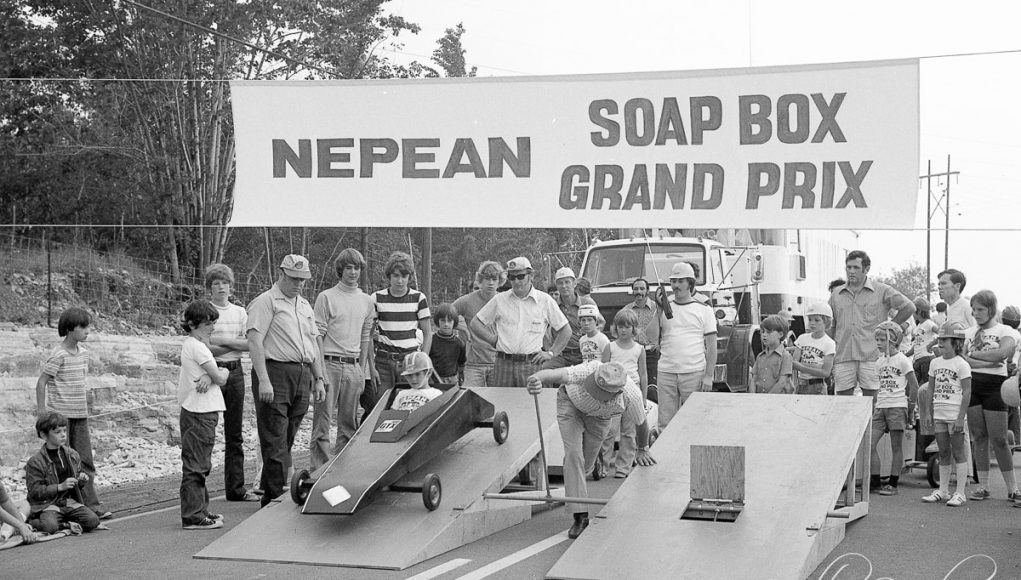 As racers know, racing is racing.

Back when racing contracts used to allow it, drivers would compete in more than one series at a time.  Mario Andretti raced Indy cars as well as Formula 1.  Jackie Stewart competed in Formula 1, CanAm, and the European touring car series.

So when we heard there was going to be a soap box derby just down the road from where we lived, it was just another form of racing to us and best-friend David and I decided to build and run a car.

One of a series of posts about the racing antics we got up to before arriving in competitive karting. Check the overview or the sidebar on the right for links to other posts in the series.

Of course we were both too big for a soap box racer, but we convinced David’s younger brother Andrew to be the driver.

I mean, what could possibly go wrong?

The derby organizers tried to keep things competitive by specifying which wheels you could buy and where you had to buy them.  Everything else was left up to your design imagination, which was pretty appealing to us.

All the other cars were big and bulky and we didn’t really understand that. After all, it was the early ‘70s and aerodynamic, light F1 cars were all the rage.  We were determined to use our extensive F1 constructors’ knowledge to full advantage (cough).

We settled on a soap-box version of the Lotus 72 F1 car.  It was wedge shaped and would cut through the air nicely.  A low-drag car must surely gain speed more quickly, right?

We started with a “space frame” chassis made out of 2X2 wood including a triangle bulkhead behind Andrew that also doubled as a rollbar (which would have worked well had it been at least as tall as his head…). Then we covered it with masonite for the bodywork to complete our aerodynamic little car, painted it black, and gave it silver pin-stripes.  It was very cool looking and very, very light…

There wasn’t much room for a steering wheel so based on experience from our younger days in Britain, we decided that Andrew would steer by pushing on the front axle with his legs. If he pushed forward with his right leg, the kart would steer left, and pushing forward with the left leg would make it steer right.  (The front axle was pinned to the center of the main rail and rotated to steer left or right.)

To stop at the bottom of the hill after what would surely be a blisteringly quick run, we gave Andrew a hand brake bolted to the right-hand side of the chassis.  He just had to pull on it and the other end would scrape the ground and stop the car.  We even added a piece of rubber on the bottom for extra friction.

And we made the lever out of the material we had on hand:  particle board.

So far, Andrew was reasonably happy with the idea of being the driver.

When we got to the track and people first saw it, I heard some young boys exclaim that our car was surely going to win the race.

The organizers, on the other hand, weren’t terribly happy about the foot steering and decided that our little vehicle was dangerous enough that Andrew should drive it down the course with no other competitor beside him.  As a veteran of foot steering in Britain, I just rolled my eyes and we got the car ready.

With all this discussion among the organizers, I think Andrew was starting to have second thoughts about his driving appointment.

“It’s OK”, we convinced him. “Everything will be fine”, and we were in business once again.

Both of our mothers were there:  David and Andrew’s mother and my mother too.  My Dad was there and took the pictures you see here.

At the appointed moment, we hoisted our little car onto the starting block. Andrew snuggled into the seat and waited for the starter to push the lever to release the car.

The car released and rolled off the ramp.  It quickly built up speed down the hill and Andrew kept it straight as an arrow so it didn’t lose any speed.   He had absolute focus – you can see the determination in his face as he’s about to cross the finish line in in the photo.

But you know, there’s nothing like an actual race to expose your design flaws.  Apparently we had a couple of big ones.

First, there’s great debate, even today, about whether it’s best to have a low drag design or a lot of weight in your soap box derby car to get you down the hill fastest.  Here’s an example:  people knowledgeable in physics can’t even agree which is correct.

To paraphrase President Kennedy:  “Let them come to a soap box derby.”   Our sleek, light design didn’t get the times the bigger, heavier cars got and after the race we could have easily given the physicists their answer.

Second (as you probably guessed from my earlier comment), don’t ever make a brake lever out of particle board.  When Andrew pulled it back, it simply tore apart as soon as it scraped the ground.

And, to make matters worse, having the brake dragging on one side of the vehicle, even for the few seconds before it disintegrated, will tend to make the car steer involuntarily in that direction.

So even though our intrepid little driver finished the race in grand style as the picture shows, as soon as he applied the brakes the car veered into the ditch and landed upside down.

Thankfully, Andrew was unhurt but a bit disappointed and there were a few “I told you so’s…“.   And while I don’t specifically remember, I’m sure there must have been a glare or two from the mothers.

If they’d held another derby, I’m sure we could have improved our car’s chances with a better design, but something tells me we would have had to go shopping for another driver.

Read the next installment in the series: Memories of … a curb